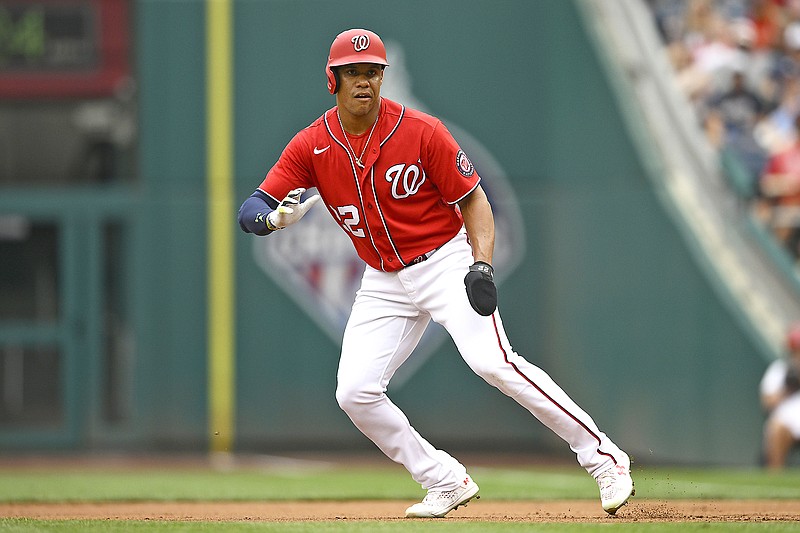 Juan Soto of the Nationals leads off first base during Sunday afternoon's game against the Cardinals in Washington. (Associated Press)

When Juan Soto turned down a 15-year, $440-million deal to stay with the Washington Nationals, it ensured Tuesday’s 5 p.m. CDT trade deadline would have a little juice.

That wasn’t a certainty when Major League Baseball and the players’ union agreed to an expanded postseason format this spring. With 12 October spots available -- and no more one-game wild-card rounds -- some had concerns about whether there would be enough star power left among sellers to satisfy a potentially growing number of buyers.

A quick glance at the standings shows at least 18 teams with legitimate playoff aspirations -- 18 clubs that might benefit from Willson Contreras, Josh Bell or Frankie Montas, among others.

With Soto, there could be even more bidders than that.

The 23-year-old is a two-time All-Star, a Home Run Derby champion, a World Series winner and famously one of the most difficult at-bats in baseball. Pry him away from the Nationals, and a club could enjoy 2½ seasons of Soto and his signature batter’s box shuffle before he can test free agency.

Of course, with so many suitors, Washington is sure to extract a heavy haul for Soto’s services. The Nationals haven’t seemed keen on a long-lasting rebuild, prioritizing near-ready talent when trading away Max Scherzer and Trea Turner last year. The industry expects GM Mike Rizzo to eye similarly advanced prospects in Soto talks.

A few contenders seem like better bets to convince Rizzo now is the time to part with the franchise cornerstone:

• St. Louis Cardinals: No franchise has more consistently churned out quality young big leaguers during the past few decades than St. Louis, and the Cards are flush with the sort of players Washington wants. Outfielders Dylan Carlson and Tyler O’Neill, infielders Nolan Gorman and Tommy Edman, and left-hander Matthew Liberatore will surely be asked about. Infield prospects Jordan Walker and Masyn Winn -- both at Double-A -- would also be enticing. The Cardinals trail Milwaukee in the N.L. Central but have a good shot at a wild card in the final seasons for Albert Pujols and Yadier Molina.

• San Diego Padres: Rookie shortstop C.J. Abrams is a consensus top-10 prospect in all of baseball but expendable because of Fernando Tatis Jr., so that’s a start. Young left-hander MacKenzie Gore also seemed like a prime trade chip after a strong start to the season, but he went on the injured list last week with a sore elbow, clouding his value. Outfield prospects Robert Hassell III and James Wood are consensus top 100 prospects who could also be moved as the Padres chase the Dodgers in the N.L. West. Speaking of …

• Los Angeles Dodgers: L.A. reportedly outbid the rival Padres for Scherzer at last year’s deadline and have the pieces to do the same for Soto, who was serenaded with “Future Dodger!” chants at Chavez Ravine during All-Star week. The Dodgers’ top prospect is 20-year-old High-A catcher Diego Cartaya -- a bit far away for Washington’s historic liking, but a possibility. Triple-A slugger Michael Busch and Double-A pitcher Bobby Miller could certainly work, and the Nats might also be interested in 24-year-old starter Dustin May, who is recovering from Tommy John surgery.

Among other possibilities: The Texas Rangers have emerged as a surprise bidder in the rumor mill, and Soto would fit nicely into a lineup along with splashy free-agent signings Corey Seager and Marcus Semien. The New York Yankees and crosstown Mets are both in first place. Soto could be insurance beyond 2022 if Aaron Judge leaves in free agency, but New York seems hesitant to move Double-A shortstop Anthony Volpe, ranked among the game’s top prospects. The Mets, meanwhile, might have to pay a premium as a division rival. The Seattle Mariners and San Francisco Giants have also been floated as potential landing spots.

Of course, Soto isn’t the only star expected to move by Tuesday. Here are some other players to watch:

• C Willson Contreras, Chicago Cubs: The three-time All-Star got a standing ovation last week in his likely Wrigley Field finale, with Chicago almost certain to find him a new home before he reaches free agency this fall. The Mets and Astros are among contenders that could use an upgrade behind the dish.

• 1B Josh Bell, Washington Nationals: The 2019 All-Star has had a resurgent year, cutting down his strikeout rate considerably while batting .302 with 14 home runs. The 29-year-old free agent-to-be is also considered a positive clubhouse presence. As a switch-hitter, he’d fit into any contender’s lineup but might best improve the defending World Series champion Atlanta Braves, who haven’t gotten much production at DH from Marcell Ozuna.

• DH J.D. Martinez, Boston Red Sox: Boston is only 3½ games out of the last A.L. wild-card spot, but with three other teams between them and the Rays. Martinez is a five-time All-Star with World Series experience, and he remains an offensive force at age 37. If the Red Sox decide to sell, plenty of teams would be asking on Martinez.

And a few others of note: Cubs OF Ian Happ is a free agent after 2023 but could be moved this week after making his first All-Star team. Chicago teammate David Robertson is likely the best relief pitcher available. … Cincinnati also figures to sell INF-OF Brandon Drury, who hit his career-high 20th homer Sunday. … Versatile sparkplug Whit Merrifield could be dealt by the Royals, but his status is murky because he has refused to get vaccinated for COVID-19. Merrifield has said he would reconsider if it meant playing postseason games in Toronto, where travel restrictions have barred unvaccinated players this year.