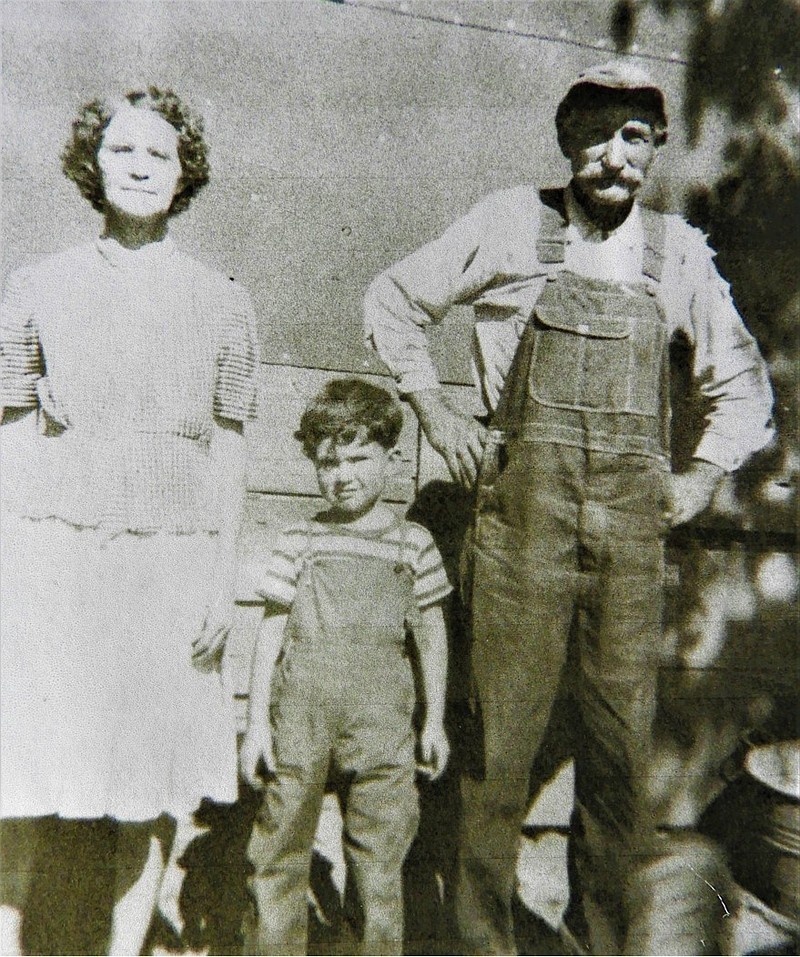 Each evening, the last thing we watch on TV is one of our favorites, The Walton's. After watching the news and westerns, we want a good family show before going to bed. Although David and I neither one grew up in the depression years, like this story revolves around, it seems like the kind of life we knew. Plenty of family love and sharing and great grandparents.

Almost every show, David remarks that grandma Walton reminds him so much of his grandma Grace and he misses her. I always wondered why he would say that. Then finally, I asked him why.

At the time grandma Walton was sharply correcting the children. I told him "the way I remember your grandma Grace was that she was a sweet little lady."

He said, "she was! But she still wanted everything done in the straight and narrow way." He said he never got in any trouble with her, because he knew better and he also just always wanted to please his Grandparents. I guess that's why she told me, "David was always such a good little boy."

He said his grandma was about the size of grandma Walton and both had a touch of red hair. Also they both dished out more love than correction, but would correct when needed. You always knew you could come to her with any problems and she would help in any way possible.

David lived with his grandma Grace for a period of time and talks about her so much. He always talks about how she took such loving, good care of him.

They didn't have a lot as the world may view, but to a little boy he had all he needed. His grandma always made him feel special and showed him love in so many ways.

To this day he still likes fried potatoes and canned tomatoes for just about any meal. That's what his grandma always fixed for him and he said it tasted so good.

The potatoes were fried in a cast iron skillet on her wood cook stove and the tomatoes were those she had canned. And, because he loved grape jelly, she always made sure he had bread, butter and grape jelly.

He has told me so many stories over the years about her. I have told some in other stories in the past.

There was the time of the great flood of 1951, in the Bluffton area, where her house was. They woke up to water all over the floor. As the water rose before they could get everything out, he remembers seeing the jars of canned vegetables she canned floating. Someone had a boat and came to help them catch the floating jars.

The irony of this was the fact that they previously owned 40 acres, along what was known then as Carpenters Island. But every time the water would rise, they faced flooding. So the first opportunity they had, to avoid floods, they moved to Bluffton, then this happened.

The store by them also had water deep in it. They used to have a marker there showing how deep it was. I believe about 4 feet. The store and house are gone now, but was there even when our boys were young.

When a home was available for sale, behind the Bluffton Store, they had bought it. David recalls the nice shed by the house that he helped as a kid to keep full of wood. Times were different then. Kids like David worked. Never begrudging, in those days it was as just what you do, with no regrets, it was family living.

He describes how they had wooden rain barrels at the corners of the house, where the gutters on the roof would collect water to fill them for household use. It is said washing your hair in rain water makes it soft and shiny. Then they had an old well cistern that also had a gutter from the roof to bring rainwater in. He describes how he went down in the well, as a kid, and cleaned it out for his grandparents before they used it.

From what David tells me, grandma Grace was strong in spirit. And although a smaller woman in size, she never let the hardships get her down and stayed positive through trials.

His grandparents lived there in that little house until his grandpa's death. Hearing David speak of him makes me sad I never knew him. He often speaks to me telling me something "As my grandpa would say," in a German accent.

David still gets tears when he talks about the day he died. He was still in bed when grandma Grace came and woke him. She asked him to get on his bicycle and "go tell your dad that grandpa just died."

David's dad, Orville, worked on the Katy (MKT) Railroad which wasn't far from his grandma's. Fortunately they were still at the depot and hadn't left for the day. And also they still owned that 40 acres I spoke of, until his death. It sold for very little in those days. It would have been worth a fortune now.

I never knew grandma Grace personally that well, but I knew her daughter, David's aunt Margie Benskin and Grandma Grace's son, uncle Elmer Kleindienst. I loved them both.

When our boys were young, we would go to visit uncle Bob and aunt Margie and they always treated us special. Margie always fixed a big nice dinner. Uncle Bob was a kidder and would always tease me and I would fuss at him.

One time when I had gained a little weight, more than the 100 pounds I was when David and I got married, he said, "Dorothy you sure are looking healthy." He meant getting fat. Of course I fussed at him and he laughed.

David's uncle Elmer was always one of my favorites on the Kleindienst side too. We also visited with uncle Elmer and aunt Mary Lou. You would have to hear him talk to understand. He had a slow drawl and always thoughtful and nice.

I think grandma Grace brought them up well. David always said he may not have been the man he is now if it wasn't for his grandma.

I remember one day grandma Grace, uncle Elmer and aunt Mary Lou, came to our house. They lived in Mexico.

They said they had asked grandma what she would like for her birthday. Was there anything she wanted or anywhere she wanted to go. She said, "Yes I want to go see David!"

Uncle Elmer asked me to sing a song while David played the guitar. I sang a Kitty Wells song, Heartbreak USA. When I was done uncle Elmer said in his slow drawl voice, "Well, I don't see how that could be done any better by anyone."

They are all gone now, but they left us with so many happy memories. I'm thankful my husband David, had such a grandma who helped him feel comfortable and loved in her home at a time when he needed it.

He talks about how he loved to crawl in between two feather bed mattresses where it was so warm and soft. We talked about how he never really remembered her house being too hot or cold. Hearing all his stories makes me admire the lady I never knew that well, except through David's memories.

There were lots of the Kleindiensts in the area at that time and also Zumstegs, along with several other family names I have heard of, that was well spoken of and respected.

Good character traits and work ethics will be passed on through generations. And never think how you treat a kid doesn't matter. They will remember!