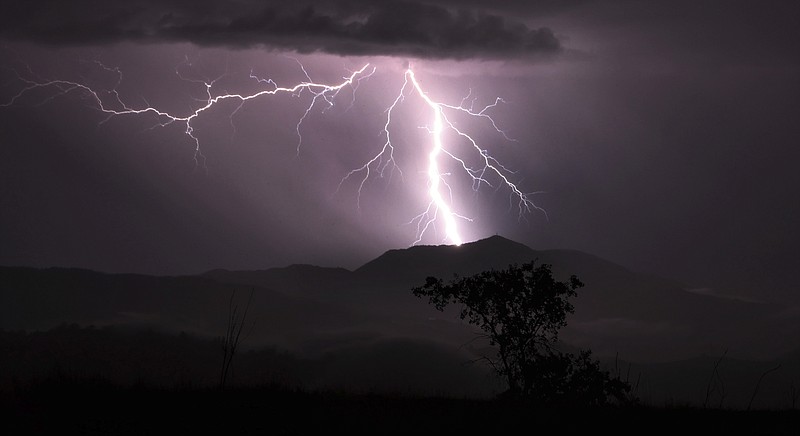 Lightning strikes over Mt. St. Helena Thursday, Sept. 9, 2021 in Napa county, Calif. Northern California was hit with well over 1,000 strikes during the storm. Fast-moving thunderstorms with lightning and little rain are moving across Northern California and raising the risk of new wildfires in the drought-stricken region. (Kent Porter/The Press Democrat via AP)

The storms that rolled through Thursday night into Friday were followed by weekend forecasts of clear weather and a warming trend in fire areas into next week.

Firefighters were diverted from the huge Caldor Fire south of Lake Tahoe to fight multiple overnight lightning fires throughout El Dorado County, fire officials said. However, most of the blazes were kept to under 10 acres.

"Fire management officials in the parks believe the fires have spread potential and could affect operations in the coming days or weeks," a statement from the parks warned.

Up to a half-inch of rain fell on portions of the Dixie Fire, which began in mid-July and has burned through huge swaths of the northern Sierra Nevada and southern Cascades. The second-largest fire in California history has burned 1,490 square miles of land and more than 1,300 homes and other buildings. It was 59 percent contained.

The rain wet tinder-dry vegetation and will cool down the fire for one or two days, which firefighters hoped to use to strengthen and expand fire lines in an effort to finally surround the blaze, fire officials said.

However, after a weekend of clear skies and light winds, a ridge of high pressure could bring a warming trend through next week, Jack Messick, incident meteorologist for the fire, said Friday evening.

The rain slowed down the fire but "once the sun gets on it, the wind's blowing on it, it eventually is going to pick up again and dry off enough and it's going to start running again," said Tony Brownell, an operations section chief with the California Department of Forestry and Fire Protection.

The threat of new lightning-sparked fires came as more than 13,000 firefighters were working to rein in 13 major fires and more than 12,000 residents were still waiting to return to evacuated homes, according to state agencies.

The Caldor Fire, which at its peak forced 22,000 people to evacuate South Lake Tahoe and areas near the Nevada state line, was 53 percent contained after burning more than 341 square miles and destroying more than 1,000 structures, including hundreds of homes.

A historic drought and recent heat waves tied to climate change have made wildfires harder to fight in the American West. Scientists say climate change has made the region much warmer and drier in the past 30 years and will continue to make weather more extreme and wildfires more frequent and destructive.

President Joe Biden will survey fire damage during a visit to California next week in which he will also campaign for Gov. Gavin Newsom, a Democrat who faces a recall election on Tuesday.

Cal Fire, meanwhile, announced a fire that destroyed 142 structures in the Sierra last month was human-caused but investigators were still working on details. The River Fire began Aug. 4 in a Placer County campground and was contained Aug. 13.