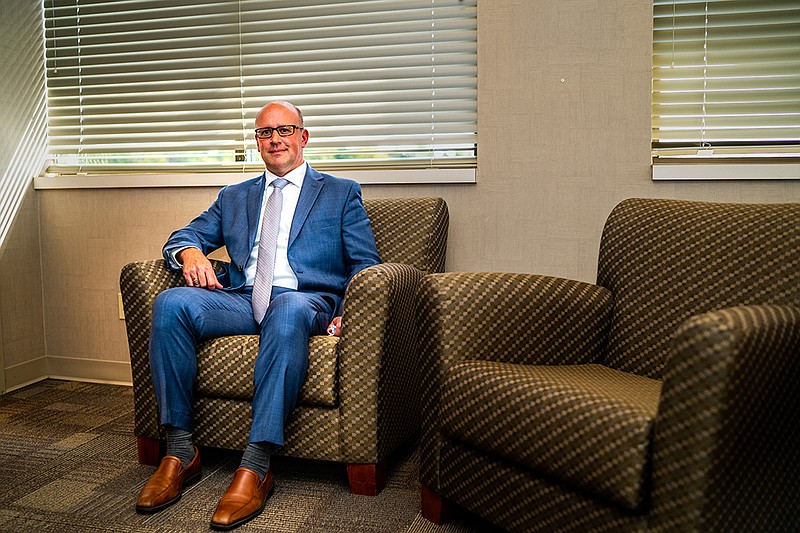 Jon Doolittle and his family experienced a real Jefferson City welcome when they arrived Oct. 16 in Missouri's Capital City.

Doolittle, the new president of the Missouri Hospital Association (MHA) said his last day as president of Mosaic Medical Center-Albany was Friday. He, his wife, Jeni, and their children had activities Saturday morning, then made the drive to Jefferson City.

"When I arrived at my rental house on Saturday afternoon, some of the folks at MHA had already been inside," Doolittle said. "They left us some provisions and gift cards. So, we had both Arris' Pizza and Central Dairy ice cream within an hour of arriving."

By Monday, he was at work at the MHA.

"It's been really positive start. The MHA staff has been great," Doolittle said. "Just in the very short time we've been here, Jeni and the kids went out to Binder Lake and caught fish. We've been outside a little bit. We packed a whole lot into just a couple of days. It's been positive."

Children are "understandably apprehensive" about moving, he continued. Two will have graduated from high school by the time the family makes a full move to Jefferson City next summer. The four who will be moving to Jefferson City have gotten a positive first impression of the city.

Jefferson City reminds Doolittle of Albany in that it has a bit of a small-town flavor, he said.

That's something he's used to. Albany's population is about 1,700.

Mosaic Medical Center-Albany is a critical access hospital. "Critical access hospital" is a designation the Centers for Medicare and Medicaid Services gives to eligible rural hospitals. The designation is intended to reduce financial vulnerability of rural hospitals and keep essential services in rural communities, thereby improving access to care.

Change at the top has been rare for MHA.

Although 2001 marks the 99th year for the MHA, Doolittle becomes only its sixth president. Part of that is because the organization didn't have a formal president for its first 40 years. Still, the average tenure of a person in the position is more than 10 years.

Doolittle replaces Herb Kuhn, who served for more than a decade.

Doolittle was president of Mosaic Medical Center-Albany for 11 years. He has served on the MHA Board of Trustees and was selected as the board's chairman in January. At the MHA, it is a tradition for the past chairmen to run search committees for leadership. When Kuhn retired, the search committee chairman was Charlie Shields, who spent 20 years in the state General Assembly and is currently president of Truman Medical Centers.

"As the association retained a search firm and then started a search, I decided to become a candidate," Doolittle said. "So, I removed myself from all the deliberations that normally the board chair would have been in, in regards to planning for the search."

Doolittle said he's a big believer in hospitals and health systems being essential parts of the overall health care system.

He's described himself as being MHA's biggest fan - while working in Albany and as a board member for the past few years.

"Like most servant-leaders, I'm looking for an opportunity to help a whole lot of people," Doolittle said. "MHA does essential work on behalf of its members, who then turn around and serve the people in the state of Missouri."