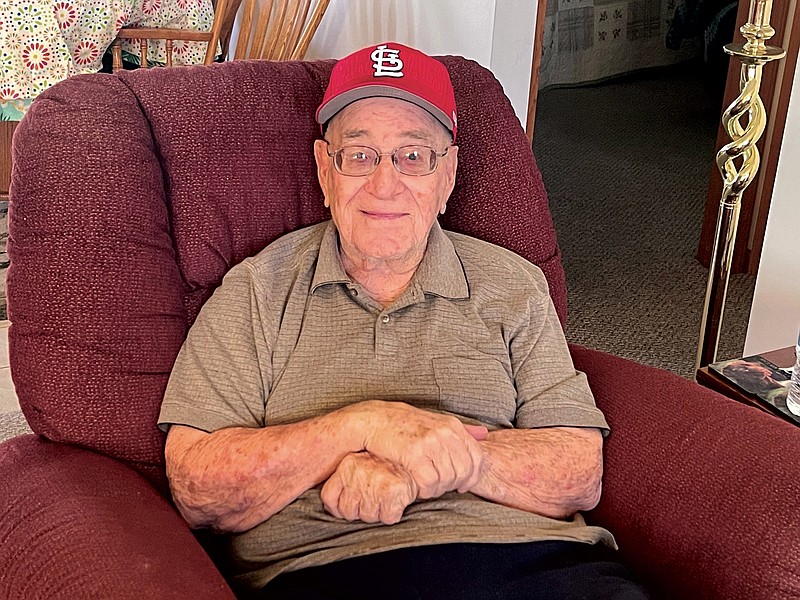 Bill Crabtree, 93, worked in the service as a mail carrier. He started at age 16 in 1945 during the war in Granite City, Illinois, and ended in Fulton almost 39 years later.

Bill Crabtree, 93, worked in the service as a mail carrier for almost 39 years. He started at age 16 in 1945 during the war in Granite City, Illinois.

Crabtree decided to quit school his sophomore year of high school to get a job to help his dad, who was raising him, his brother, Don, and his sisters, Nelda and Charlotte. His mother died in child birth when he was six.

That evening, he went to his girlfriend-at the-time's house where they search the want ads and saw "Wanted: Postal Carrier. See Al Mounds at the Post Office." With him living so close, Crabtree went over to talk to the man. He gave him his name and address because they didn't have a phone. The next morning Mounds was at his door asking him to come to work.

Since it was during the war, and the postal service needed workers, he didn't have to take an exam like usual. He worked there for five years before he took the exam and passed.

He lived three to four miles away from the post office, so he had to ride the bus. And lucky for him, if you were a mail carrier and had your bag on you, you got to ride for free.

Crabtree worked long hours. He'd be at work at 4:45 a.m. and wouldn't get off until 7 p.m. He carried two routes a day: In the morning, he would do his residential route and the second was his downtown route.

"There was only one truck," Crabtree said. "In the mornings, we would tie up our mail, magazines and letters in a sack, and then label them where they went and the truck would drop them off."

With working those long hours, he decided to get a room at the local YMCA because it was right across the street from the post office. While living at the YMCA, he purchased a TV, which was unusual at the time for someone to have, and he would bring it downstairs, where all the men would gather around to watch sports.

After working for several years at the post office, he gained many stories.

In one of his routes, there was a house next to a store, and in between the two was a fenced in area with a horse.

He also had to work on two occasions with a painful toothache.

"One day I had a terrible toothache," Crabtree said. "I was driving the truck, and I was double parked delivering packages downtown. I had a package for the dentist upstairs, so I got in there, and he didn't have anybody. So I said, 'Boy, I've had a toothache for two or three days. Can you pull my tooth?' He said yeah, so I sat down, he pulled it out and gave me a round pot to spit in the rest of the day."

Another time, as he got back from carrying mail, he was in pain with another toothache. His boss knew he was hurting, so he called a second dentist in town and asked if he'd be able to pull his tooth. The dentist agreed, Crabtree got his tooth pulled and went right back to work.

On another day, he was casing mail for the next day when he noticed he had an insured package for Hudson Jewelry. So he wrote out the insure slip and put it with the rest of Hudson Jewelry's mail. The next morning, he had the slip but the package was gone. Later on, postal inspectors came to try and figure out who was stealing the mail. The inspectors left $10 in an envelope. As the mail was delivered, the inspectors watched. After one of the mail carriers delivered the mail, the inspectors asked to see the envelope. The money was gone and that individual was fired.

As he saved money, he started to feel sorry for his dad and his siblings because they were living above a tavern. He bought a small, old house in West Granite for them all to live in. The house had three rooms in total, no hot water, no inside toilet and no heat.

When he would come home from work, he'd sit on the front porch at the house. He noticed a girl would walk by his house two or three times a week around 5 p.m. He finally got the courage to ask her why she walks by every day. Turns out, she played sports after school and had to walk home afterward.

"I said, 'I have a car. How about me coming out to pick you up?' Because by the time she got done, school buses stopped running. So I said, I'll come out and get you and take you home. So, we talked and got acquainted."

It wasn't too long after that he asked Helen to marry him.

She graduated on a Monday night and the two got married on Tuesday. They have now been together for 70 years and had four children: Becky, Billy, Bonnie and their son they later adopted, Lance.

One day during his route, an ambulance went flying by, which gave Crabtree a funny feeling. Turns out, his son Billy who was five at the time was playing in the fire next door. His fur chaps caught on fire. Helen came running out. She tried to put out the fire and burnt her hands. The two were taken to the hospital where Billy stayed for 30 days.

After awhile, they decided they wanted to move to the country. The two looked around Illinois but couldn't find anything, so they decided to move in 1965 to Steedman. They bought a 110 year old house with 125 acres of land for $9,000. For a while, Crabtree had to drive back and forth on the weekends from the post office in Granite City to his wife on the weekends.

Crabtree worked in Granite City for 21 years before transferring to Fulton when a position became available.

While he was still carrying mail, Helen worked at the bank in Steedman. She would ride her bike to work every day, but was unable to ride it back up the steep hill that went to their house.

"I'd go down and get her with the truck because she couldn't ride her bike back up the hill," Crabtree said. "So I took a rope that I had, tied it to the trunk of the car and I rode the bike back as she drove the car."

As Crabtree and his wife got older and he retired, they started talking about moving to Florida, and took the plunge in 1983. After moving there, he discovered he was able to join different baseball teams depending on his age. He played until he turned 70. They stayed in Florida until 2003 before moving back to Callaway County to be close to family.

His son Billy ended up following in his footsteps.

After high school, Billy didn't go to college. He decided to work at a grocery store - later Moser's - where he bagged groceries. Crabtree informed his son a janitor retired at the post office and he should come and get the job. His son said he didn't want to be a janitor, but Crabtree told him, "You have to get your foot in somewhere." Billy worked as a janitor for nine months, became a clerk after that and eventually became postmaster in Montgomery City for a year and Holts Summit for five.

Crabtree has had an interesting life. Not only did he work at the post office, he tried out for the St. Louis Cardinals when he was 18, was scorekeeper for basketball games at South Callaway R-2 School for many years and served on the school board there as well. In his spare time, he also loves singing. He was a faithful member of Reform Baptist Church where he was the song leader at Reform Baptist for more than 20 years.