Steffen displaces Turner at keeper, to start vs. Jamaica 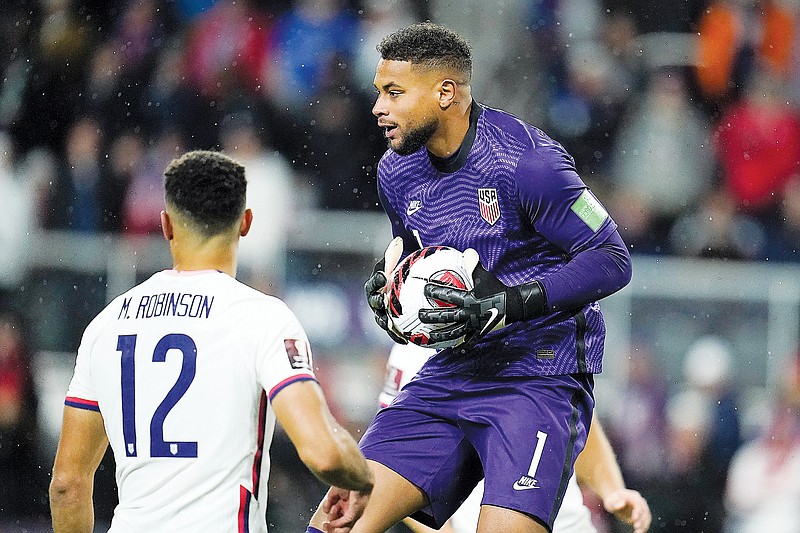 U.S. goalkeeper Zack Steffen collects the ball on a shot by Mexico during the second half of a FIFA World Cup qualifying match Friday in Cincinnati.

KINGSTON, Jamaica - Zack Steffen is in quite an unusual position: The No. 2 goalkeeper with Manchester City is No. 1 with the United States.

New England's Matt Turner started the first five U.S. qualifiers, and Steffen took over for the 2-1 win last month against Costa Rica. Steffen made a pair of key saves in Friday's 2-0 victory against Mexico and will start tonight when the Americans open the second half of World Cup qualifying at Jamaica.

"It was a difficult decision," U.S. coach Gregg Berhalter said Monday. "It wasn't something that was easy based on how we thought Matt was playing."

While the U.S. beat Jamaica 2-0 on Oct. 7, the 59th-ranked Reggae Boyz have been boosted by the return of West Ham striker Michail Antonio and Aston Villa winger Leon Bailey.

The No. 13 Americans will be missing midfielder Weston McKennie and defender Miles Robinson, serving one-game suspensions for yellow-card accumulation.

Berhalter prefers Steffen for his role in possession.

"We were looking at the games and how they were unfolding and were saying there's a number of possessions that we can be keeping in these games that we're not," Berhalter said. "We think Zack is stronger with his feet, and we made that decision based on that."

Steffen's September was disrupted by back spasms followed by a positive COVID-19 test. He returned for the Oct. 13 match against Costa Rica in Columbus, Ohio, where he played for the Crew from 2016-19. Steffen's headed clearance led to Keysher Fuller's goal 60 seconds in, but the U.S. rallied on goals by Sergio Dest and Tim Weah for a 2-1 win.

Then against Mexico, he dived to make saves on Edson lvarez in the 11th minute and Hirving Lozano in the 19th, keeping the U.S. even on a night Christian Pulisic and McKennie would score late in the second half.

"We ask keepers all the time: Can you make that one, maybe two big saves that you need to make?" defender Walker Zimmerman said. "And if he doesn't make that save, I think the game is a lot different."

Steffen is City's backup to Ederson, a 28-year-old Brazilian who won the Golden Glove for most Premier League shutouts in each of the past two seasons.

A 26-year-old from the Philadelphia suburb of Coatesville, Steffen signed with City in July 2019, then was loaned to Fortuna Dsseldorf for a season cut short by an injured left patellar tendon. The Cityzens announced this month he had agreed to a four-year contract through 2024-25, one year shorter than Ederson's deal.

Steffen has four appearances at City this season: one in the Premier League, one in the Community Shield and two in the League Cup.

"My goal is to become a starter, whether that's at City, whether it's at another team," Steffen said. "I go into training focused on trying to push Eddie, and I know that's another good, really good goalkeeper. We're friends off the field, so then it becomes easier to to support and push each other on the field. So that's my mentality, is just to go there and learn and train as best as possible, and the rest will fall in line."

Sean Johnson and Ethan Horvath also are in the U.S. goalkeeper pool.

"Especially as a goalkeeper, it's lonely out there," Steffen said. "You need those saves to give you confidence and reassurance that you're out there for a reason."

Turner, 27, played high school baseball, became intrigued by soccer while watching the 2010 World Cup and became the goalkeeper as an 11th grader that fall at Saint Joseph Regional High School in Montvale, N.J. He went to Fairfield, was overlooked in the Major League Soccer draft and signed with the Revolution in March 2016. Two years later, he became New England's starter.

"We first played against each other back in 2018 in MLS and we sort of created a bond then because we were both up-and-coming young goalkeepers in the United States in MLS. And obviously his career went a certain way and mine stayed in MLS," Turner said. "And we've been in contact over the over the last few years, just sort of being there for each other in good times and bad times."

The U.S. leads North and Central America and the Caribbean with 14 points, ahead of Mexico on goal difference, followed by Canada (13), Panama (11), Costa Rica, Jamaica and El Salvador (six each) and Honduras (three). The top three nations qualify, and fourth place advances to a playoff.

Berhalter said whether Pulisic will start is a "judgment call." Mark McKenzie or Chris Richards will start in central defense, presumably paired with Zimmerman, and Kellyn Acosta, Gianluca Busio or Sebastian Lletget will replace McKennie.

For now, Steffen's starting role is his to lose.

"It's also up to Zach keeping his form. We're not hesitant to change goalkeepers," Berhalter said. "We know that the competition is really tight and they're pushing each other."