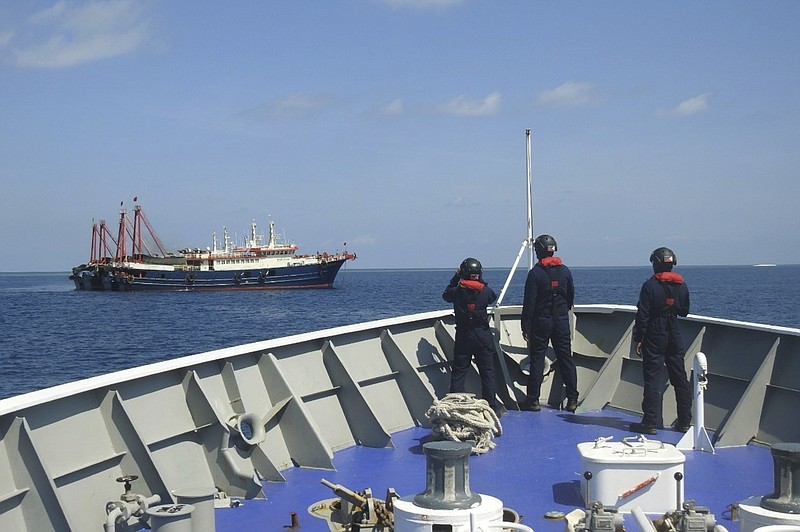 MANILA, Philippines (AP) - The Philippines has demanded China withdraw its ships and fishing vessels from the vicinity of a Philippine-occupied island in the South China Sea, where the Chinese military has asserted its sovereignty and vowed to "unswervingly safeguard" the disputed territory.

The exchange of protests by the Asian neighbors over the island, internationally called Thitu, is the latest flareup in a long simmering territorial feud in the strategic waterway that has escalated in the last two months.

The Department of Foreign Affairs in Manila said Saturday it has filed a diplomatic protest against "the incessant deployment, prolonged presence and illegal activities of Chinese maritime assets and fishing vessels in the vicinity of the Pag-asa islands." It used the Philippine name for Thitu, which China calls Zhongye Dao.

The department demanded that China withdraw its vessels from near the island, which it said "is an integral part of the Philippines over which it has sovereignty and jurisdiction."

The 92-acres island is the largest of nine mostly islets, reefs and shoals occupied by Philippine forces in the disputed waters. The Manila government lists Thitu and outlying outcrops as part of a town in western Palawan province.

Aside from Filipino troops and police, a small fishing community can be found on Thitu. The government has constructed a beach ramp to allow the docking of navy and cargo ships and unloading of construction materials and heavy equipment for new projects, including the repair and lengthening of a seawater-eroded airstrip, an ice plant for fishermen and more military barracks.

Chinese officials have not protested as loudly as before the Philippine constructions amid cozier ties between Beijing and Manila under Philippine President Rodrigo Duterte. But on Thursday, Chinese Defense Ministry spokesman Tang Kefei said China was "resolutely opposed" to any Philippine development on Thitu.

"China's military will unswervingly safeguard national territory, sovereignty and maritime rights, while resolutely maintaining peace and stability in the South China Sea," Tang said, without elaborating at a monthly briefing.

The escalating feud between Manila and Beijing started after more than 200 Chinese vessels suspected by Philippine authorities to be operated by government militias were spotted in early March at Whitsun Reef. The Philippine defense chief and foreign secretary demanded the vessels leave, and Filipino officials later deployed navy and coast guard vessels to the area. China said it owns the reef and the Chinese vessels were sheltering there from rough seas.

The Philippines has issued dozens of diplomatic protests to China since then over the disputes.