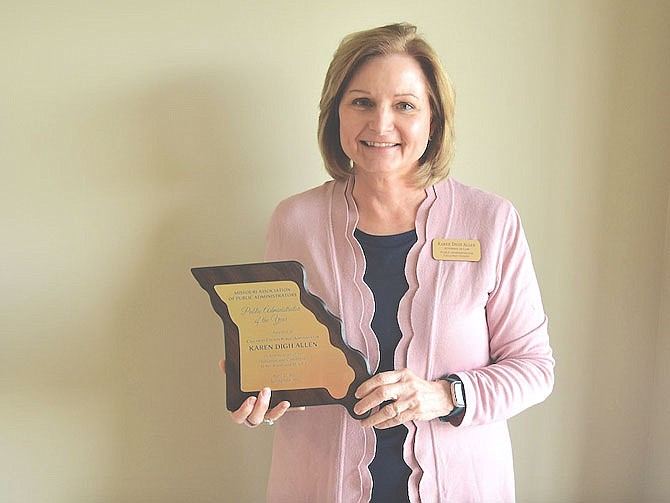 "I was very, very shocked," Digh Allen said. "I had tears in my eyes; I was really shocked. It means a lot because of the public administrator as a whole, we bond together because we have tough jobs, and sometimes you feel like no one else understands what we do except each other, so that meant a lot to be recognized by those people."

Digh Allen moved to Fulton in 1975, where she attended high school for one year and then went to William Woods. After graduating, Digh Allen attended law school in Kansas but couldn't stay away from Fulton.

After she remarried 12 years ago to Eugene Allen, the couple decided to come back to Fulton where they raised their family, and Digh Allen started a job as an attorney in Jefferson City. She worked there for nine years in different legal departments, but the long days and commute were tiring.

With the Callaway County public administrator at the time retiring and her dad giving her a little nudge, Digh Allen ran for the office, was elected and started her first term in January 1997. And 25 years later, she's still going strong.

"I really enjoy it," Digh Allen said. "It combines a lot of the experiences I had at the state with the different departments that I worked in. But when you look at public administrators statewide, it's typical people with a heart.

Not only is she involved in her community, but Digh Allen is also very active with county activities and associations that deal with county government and guardianship. She is a member of the National Guardianship Association, a certified guardian, is working on getting her National Master Guardianship Certification, and she has served on the committee that developed the testing protocol for the Center of Guardianship's new finance certification.

Digh Allen volunteers for several committees and work groups while also being the liaison between NGA and MAPA, is involved with the National Association of Counties, participates on multiple NACo committees, is a graduate from the NACo High Performance Leadership Academy, and participates in annual NACo legislative conferences in Washington, D.C.

She was active with MO-Wings, works with the court system and caseworkers to advocate the use of the least restrictive legal status necessary to meet clients' needs for guardianship or conservator, is a member of Kiwanis Club, and participates in the MO Federation of Republican Women, Fulton Republican Women's Club, Callaway County Republican Women and the Fulton Rotary Club.

"I really enjoy that (being active) because that's where you can bring about positive change," she said.

As far as her community, clients and staff go, Digh Allen always takes the extra time for them. For her clients, she gives them a Christmas and birthday card every year. Every Thursday, Digh Allen and her staff put aside time for weekly phone calls with their clients, which is one of her favorite parts of the job.

And to show thanks in her community, she delivered pizzas to the road and bridge workers who were working to keep the roads clear during the bad weather in February.

Though she loves her job, it does come with its challenges. Callaway County has the only maximum-security unit in the state, so that was making case loads in the county rise.

Digh Allen found a sponsor for a venue bill that passed last year, which states when someone is placed in a county for treatment, that is not their venue. This was important to her because it would help level the playing field across the state and hopefully even out caseloads among public administrators because people are best served when their guardian is from their community, so it not only benefitted public administrators but also the individuals needing guardianship.

Right now, Digh Allen has 130 clients and only 40 of them are from Callaway County. She is hoping with this bill the issue will start to transition over the years and make it easier for her to serve those in Callaway County.

Another bill Digh Allen is behind is one that would provide oversight of those who are released from supervision who committed serious crimes. Once those individuals are released, there's no oversight other than the public administrator's office, and they're not technically designed to do that.

"I always have goals," Digh Allen said. "That's one of the things I enjoy - you look at a situation and go, 'Something can be changed, can be better,' and you do what you can to bring that about."