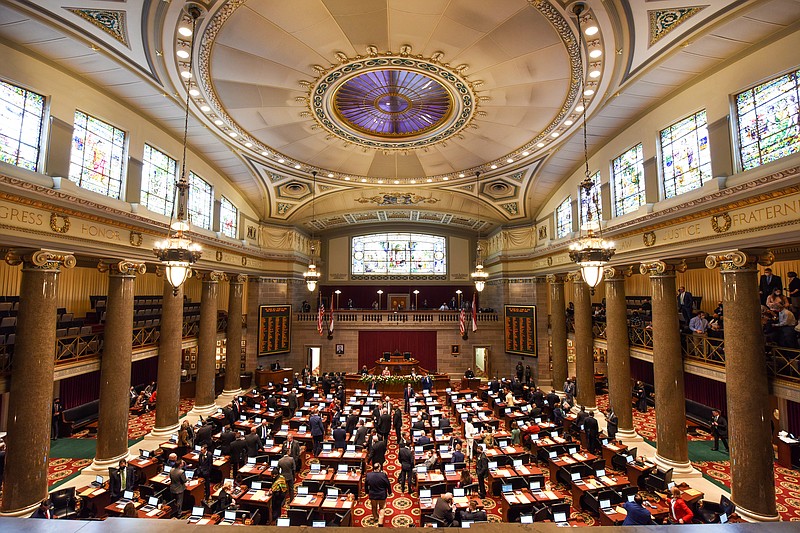 Legislators filter into the chamber of the Missouri House of Representatives on Jan. 6 in the Capitol.

It wasn't long ago when a "public meeting" of the city council or state legislature meant the general public could show up to watch and, quite often, speak about proposals and perceived problems.

The coronavirus pandemic has put an end to that in many places, perhaps permanently altering the way the American public interacts with government.

A year after COVID-19 triggered government shutdowns and crowd limitations, more public bodies than ever are livestreaming their meetings for anyone to watch from a computer, television or smartphone. But in some cases, it's become harder for people to actually talk with their elected officials.

An Associated Press survey of state legislatures found most no longer allow people inside their chambers to observe, and some still do not allow people to testify remotely at committee hearings where legislation is shaped. At some city council meetings convened remotely, the only avenue for public input is a written comment.

"In a way, this is kind of helping move us toward a country where citizens can be more involved in their government through Zoom, and that's a good thing," said David Cuillier, an associate journalism professor at the University of Arizona who is president of the National Freedom of Information Coalition.

But overall, he said, the pandemic "has created more problems" for public oversight of government.

All 50 state legislatures already provided video or audio of their floor sessions before the pandemic. The Missouri and North Carolina senates currently are the only chambers offering just audio, which can make it difficult for listeners to recognize the speakers.

As a result of the pandemic, all legislative chambers now also provide live audio or video feeds of at least some committee hearings. A growing number are archiving those files for people to access on demand, according to the National Conference of State Legislatures.

But the AP survey found that 13 legislative chambers in eight states - Alabama, Arkansas, Iowa, Indiana, Louisiana, Missouri, Nebraska and Ohio - still do not allow people outside the Capitol to testify remotely by phone or video during committee hearings. Most of those chambers let the public attend hearings in-person, but some people have been reluctant to do so because of COVID-19.

"I won't send any person into that Capitol right now, no matter how important the issue is. It's just not safe," said Jen Bersdale, executive director of the nonprofit advocacy group Missouri Health Care for All, which scrapped its in-person lobbying day at the Capitol.

Bersdale helped organize a letter from about three dozen organizations urging Missouri lawmakers to allow remote testimony at hearings and make themselves available for video or phone calls with people who do not want to enter the building.

The Republican-led Missouri Senate does not allow remote testimony. The GOP-led House adopted a rule this year leaving the decision to each committee. But approval must be granted at least one committee hearing in advance, which could be a full week based on typical schedules. So far, only a few of the four dozen House committees have used the option.

"It feels like it's just legislators and lobbyists, and I really miss just talking to Missourians that aren't getting paid to be in that building," she said.

The Arizona House also leaves it up to committee chairs to decide whether to allow remote testimony. But anyone wanting remote access to hearings first must go to the Capitol to register.

Republican Rep. John Kavanagh, chairman of the House Government and Elections Committee, initially refused to let the public testify remotely at his hearings because he feared getting overloaded with witnesses from other states. He later allowed it after he saw virtual testimony worked fine in other committees.

But Kavanagh remains concerned that interest groups could game the system by lining up scores of people to provide video testimony.

"The problem, of course, is not hearing what people have to say. It's getting a grossly distorted representation of people's views because certain organized groups totally dominate the input," Kavanagh said.

When the coronavirus emerged last year, some local governments and court systems struggled with how to allow public access while still complying with orders that prohibited or significantly limited in-person gatherings. The result was that some initial actions were taken in secret.

Many courts have since expanded their use of virtual hearings, especially for pretrial motions and bail determinations. Inmates have appeared by video from jails and attorneys from their offices or homes. The remote hearings have saved travel time for lawyers and jail staff.

"If tomorrow COVID were cured, would we still continue with virtual hearings? Well, probably, yeah," said Bill Raftery, a senior analyst at the National Center for State Courts.

Though some states already allowed officials to participate remotely in meetings, most states had to change or suspend their open-meeting requirements to accommodate coronavirus precautions.

Legislation by Rep. Gerry Pollet, a Democrat, would put the remote public-access provisions into state law, require more entities to post their meeting agendas online and require that the public be given a chance to comment at any regular meetings - remote or live - where final actions are taken.

"It's been very much of a surprise to people to learn (during the pandemic) that there is no right under the state open-meetings act for the public to comment at public meetings," Pollet said.

The California city of Redlands, east of Los Angeles, used to allow people attending its meetings to publicly speak about issues. Since the pandemic, the council has held virtual meetings that are livestreamed on its website. The public can watch but can no longer speak. Instead, the city clerk reads aloud any written public comments received at least 24 hours in advance of a meeting. Late comments are added to a packet of materials for council members but not audibly shared.

But Ross French's comment, which criticized the "temper tantrum" of a councilman, wasn't read aloud because he sent it several hours after the deadline. That left him disappointed. Tone, inflection and emotion often get lost when thoughts are not personally spoken, he said.

"When someone else is reading your copy," said French, a digital communications manager at a local university, "it's never going to be exactly how you intended it."