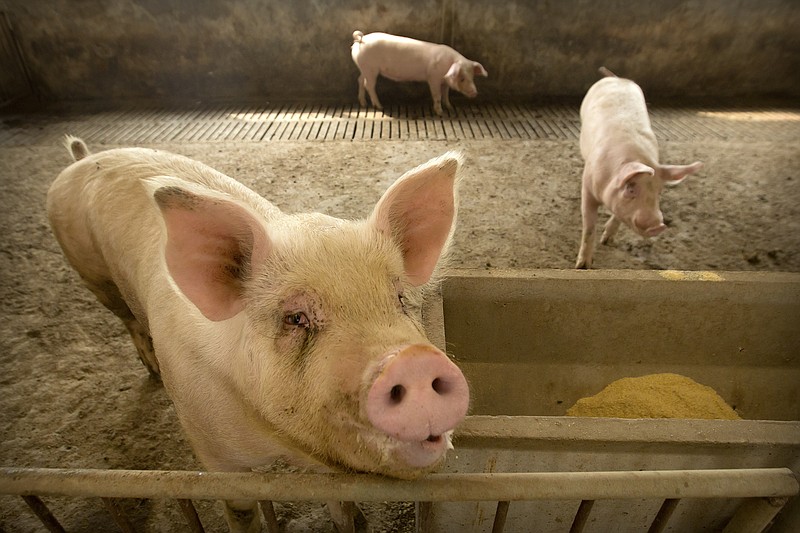 In this May 8, 2019, photo, pigs stand in a barn at a pig farm in Jiangjiaqiao village in northern China's Hebei province. Pork lovers worldwide are wincing at prices that have jumped by up to 40 percent as China's struggle to stamp out African swine fever in its vast pig herds sends shockwaves through global meat markets. (AP Photo/Mark Schiefelbein)

Debate over a state law regarding large farming operation regulations continued Tuesday with arguments in a civil lawsuit filed in August 2019 in Cole County Court.

Judge Dan Green set aside a temporary restraining order to block the law from going into effect in September 2019.

Since then, those who believe the law shields large farms from stringent local health rules have continued their court battle with the state.

Under SB 391, a new or expansion of an existing facility would not occur until the Missouri Department of Natural Resources had issued an operating permit. CAFO applicants would have to demonstrate they can meet several rules and design criteria. They must also prove they are a legal company; provide neighbor notices; meet buffer distances; and provide plans for animal management, manure generation and nutrient management.

During Tuesday's hearing, Chesterfield attorney Stephen Jeffery, representing the counties and private citizens, said his clients contend when Green set aside the temporary restraining order he added the petitioners could return to the court and seek relief if circumstances changed.

"The state and the other defendants in this case have said that there is no immediate harm because no one is trying to enforce Senate Bill 391, anywhere, against anybody," Jeffery said. "That existed in August 2019, but now we have evidence that has changed."

Jeffery referred to a court case in Cooper County, where a judge earlier this year ruled in favor of regulations in SB 391 and against county health ordinances.

"The agribusiness trade association said this would never happen, and now we see that it did happen," Jeffery said.

Jeffery called Cedar County Presiding Commissioner Marion Collins to the stand, who talked about receiving a letter from a lawyer representing Show Me Ag, a company looking to put in a CAFO in that county. Collins said the letter threatened litigation against the county over its health ordinance under SB 391 and House Bill 271.

HB 271 was signed into law by Parson earlier this month. It's a local government omnibus bill, parts of which limit local public health orders. Parson said one of the reasons he signed the bill was when the pandemic occurred, there was overreach on local levels, including on health ordinances.

The bill states local political subdivisions can only issue public health orders that restrict access to specified locations, like churches, businesses or schools, for 30 days in a 180-day period when the governor has declared a state of emergency. These orders can then be extended more than once by a simple majority vote by the local governing body. If a state of emergency hasn't been declared by the governor, public health order restrictions can last only 21 days and require a two-thirds majority vote by the local governing body to be extended.

"This is exactly the type of facts which didn't exist a year and a half ago," Jeffery said.

Assistant Attorney General Justin Smith, representing Parson as well as the Air Conservation and Clean Water commissions, told Green this is the third time the plaintiffs have asked for this case to start over before a summary judgment is given in the case.

Both parties are asking Green to issue a summary judgment, which is entered by a court for one party against another without a full trial. Summary judgments may be issued on the merits of an entire case or on discrete issues in the case.

In March, Jeffery said his clients contend under the federal and state constitutions they had fundamental rights to maintain protections of their personal health and safety and they had the fundamental right to expect their elected officials will "take reasonable and appropriate actions to protect the public health." It was believed at that time this would be the final argument in the case.

Green indicated they would return for a final judgment in August.