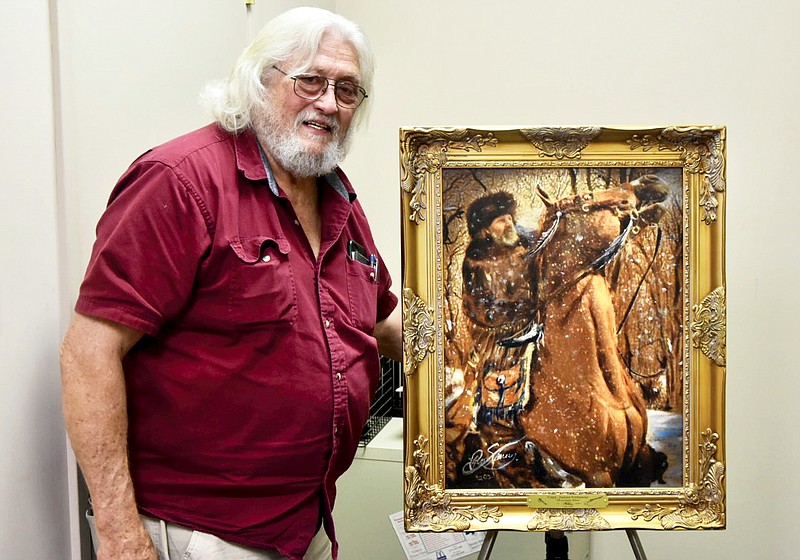 After months of genealogy and research, Ron Hauser discovers that Captain James Callaway is his fourth-great-grand-nephew. With no actual paintings or photographs of Callaway, Hauser depicts what he believes Callaway would have looked like.

Artist Ron Hauser is also a history and genealogy enthusiast. During the coronavirus pandemic, Hauser decided to do some digging into his family tree with the help of Ancestry.com.

Hauser - being adopted - looked into the history of his birth name, Ron Pennington. He started with his father, Adrian Pennington, and worked his way back.

After some extensive research, the 78-year-old Hauser claims that Capt. James Callaway - the namesake of Callaway County - is his fourth-great-grand-nephew. James Callaway was also the grandson of Daniel Boone. He was killed in battle in 1815 in what is now Montgomery County and was buried there.

"I'm his great-grand-uncle," Hauser said of Callaway. "I mean it sounds silly. And my kids fought me day and night, tooth and nail on it. They said, 'Dad, there's no way you can be his uncle,' and I said 'Yeah, it just works out that way.'"

The more Hauser found out about his connection to James Callaway, the more he wanted to know about his distant relative. During his research, he discovered there were no actual pictures of Callaway. That's when he created his depiction of what Callaway might have looked like.

"This man, he would have had features similar to this, I think," Hauser said. "It would have been in the winter - he would had had a beard."

In the early spring of last year, Hauser snapped a photo of a mechanic named Dale Chaney. At the time, he wasn't sure what he was going to do with Chaney's photo, but he knew he wanted to paint him. But it wasn't until he was in the midst of his genealogy research that Hauser decided that Chaney's face would be used in his painting of Callaway.

"Dale usually has this nice, little beard," Hauser said. "And he just has one of those faces, his face was just perfect. And that was all Dale did, was the face. I make up the body, and I found a horse that looked similar to this one.

"I made the background up, and I paint in all kinds of things," he said. "I think it's a great representation of him."

Hauser started the process of the painting last November. First, he created a mini version of what he wanted to illustrate, using Photoshop, then moved on to the actual painting and finally adding in details, like the snow. It took Hauser about four months to fully finish "Captain James Callaway: 'Mountain Man.'"

Though Hauser is from St. Charles, he and his family have property in Callaway County - it's their escape from the city.

Hauser would like to donate his painting of James Callaway to Callaway County for all to enjoy.

For more information about his paintings or to contact Hauser, visit ronhauserartist.com.