VFW hosts raffle for motorcycle in honor of local veteran 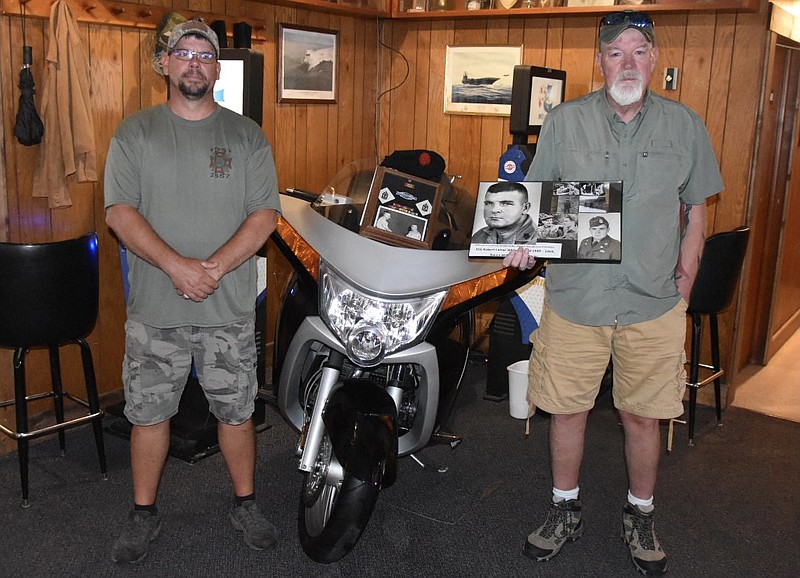 <p>Paula Tredway/FULTON SUN</p><p>Robert Bennett (left) and Bob White pose with the 2008 Victory Vision Tour motorcycle that White donated for a raffle at the VFW Post 2657 in honor of his late father, Robert L. White.</p>

Fulton's VFW Post 2657 is holding a raffle for a 2008 Victory Vision Tour Premium motorcycle donated by Bob White in honor of his father, Robert L. White, who passed away in 1982.

Robert White was a first sergeant and a three-time Bronze Star recipient. He served in both the Korean and Vietnam wars, and was a 20-year active veteran.

"He was a soldier," Bob White said. "And he was a loving dad, but he was a soldier. And I want to be a part of supporting them (veterans). That's why the bike is here."

Bob White explained that the motorcycle only has 6,240 miles on it and comes with an adjustable windshield, heated seats, cruise control, a stereo system with backseat speakers and a custom luggage rack.

"This is about these people (veterans), the warriors that fought for our freedom," Bob White said. "My father was one of them, no means the best of them or the least of them, but he was one of them. It's for him and it's for them."

They will be taking the bike to the 14th annual Sons of AMVETS Frogs and Hogs in Mokane on Friday and Saturday. Raffle tickets can be bought at the VFW or online for $5 a ticket or five for $25. The winner will be drawn in early September.

"We can't thank Bob enough for what he has done," Post 2657 member Robert Bennett said. "This is probably the biggest donation that has ever been given to the VFW, definitely the most expensive.

All proceeds will be going back into the VFW to help set their new "Fallen Soldier" statue in front of the building in Fulton for all to see, as well as any updates needed around the property.