Set and achieve your 2021 goals 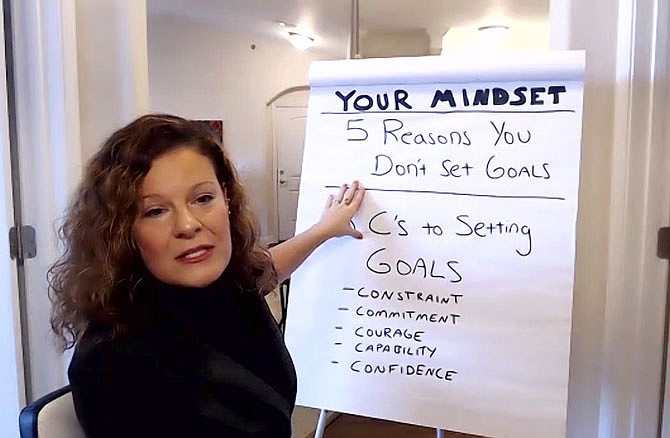 While it might be tempting to skip out on setting goals during stressful seasons such as these, now's actually the perfect time, said Sarah Cyr, business coach and Eat Drink Think Club owner.

"If you aren't setting goals and achieving them, you're missing a key component in expanding your business and improving your life," she said. "Goals create motivation."

On Tuesday morning, Cyr taught a virtual class on goal-setting hosted by the Missouri Women's Business Center. Setting a goal is part of achieving the mindset needed to pursue the results we want, she said. A clear goal can drive decision-making and cut down on procrastination.

"(Sometimes) setting a goal feels like just another burden or addition to your to-do list," she said.

Other people find have a sense of shame or embarrassment about a particular goal, such as losing weight; don't want to commit to a goal until the circumstances are exactly right; or fear that failure to meet the goal would be worse than not pursuing it in the first place.

Cyr believes it's worth working to overcome those hangups.

"If you're in habit of beating yourself up, nothing will change when you meet your goal, because your brain comes with you," she said.

She listed five "Cs" of setting goals that address common worries and mistakes.

It's better to pick and pursue one meaningful goal than multiple smaller goals, Cyr said.

"Constraint prevents what we call decision fatigue," she said. "Constraint to one goal gives your brain more energy and focus in one area."

She suggested listing out 10 aspects of your life or job you want to change, and focusing in on the one you'd be most thrilled to accomplish.

"Make sure your list has at least one really big goal you have some doubt about," she said.

The goal should also be specific: Rather than "make more money," specify "find a new revenue stream for my business by the end of this year" or "land five new clients."

After choosing a goal, commit to it.

"Indecision can cost you time, money and progress," Cyr said. "Commitment works when you love your reasons why you want this goal more than how hard it will be to get there."

She instructed listeners to write down the reasons why they want to achieve their goal.

"Making a decision is an action," she said. "It's one of the most powerful things you can do in your business or in your life."

Wholeheartedly pursuing a goal might mean incurring financial or personal risk. Acknowledging that and going for your goal anyway takes courage - which is a healthy thing to cultivate, Cyr said.

"It's rare we actually create opportunities for ourselves where we practice having courage in life," she said. "We're not running from tigers every day."

Achieving a goal might require trying 10 new Facebook ads and watching them all fall flat or attending a dozen networking events and dealing with the discomfort of chatting with strangers.

Cyr asked her audience to balance confidence in achieving goals with a willingness to fail and move on.

Whether someone fails or succeeds in achieving a goal, they're bound to learn lessons and new skills along the way.

She shared the story of a friend of hers who set the goal of finding a lifelong partner within a year. The friend committed to the goal by going on as many dates as possible - with people on dating apps, with friends of friends and even with a man she met in a coffee shop.

The friend was willing to go on 100 first dates to find a spouse. It only took her 17.

"After the first 10 dates, she had so much experience meeting new people, she was a different person," Cyr said.

Recognizing the capabilities one builds along the path to a goal helps build confidence.

"Instead of beating yourself up for what you haven't accomplished, you have to be skilled at recognizing your capability," Cyr said. "I want you guys to get good at failing and complimenting yourself along the way."