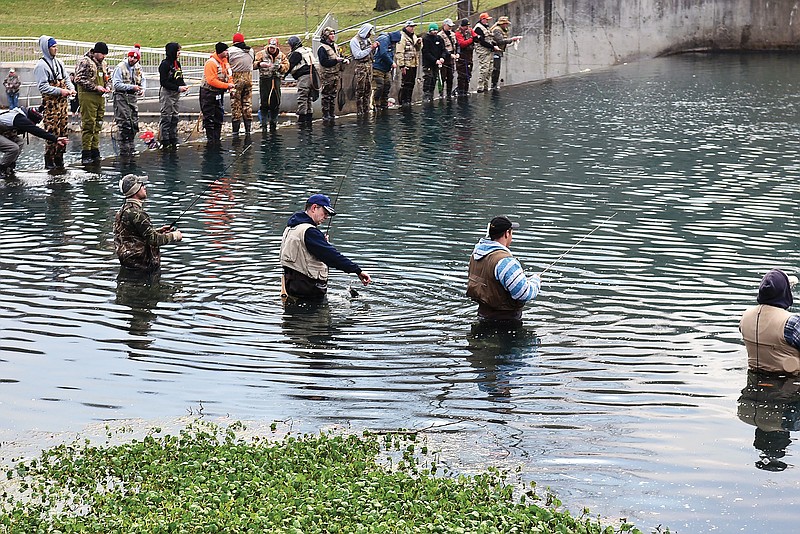 The Missouri Trout Opener is a fishing celebration that occurs annually March 1.

Through the years, I've had to defend the Missouri Trout Opener time and time again.

With each passing year, doing so becomes easier and easier. Because the older I become, the less I care about personal gratification. It's a beautiful thing about becoming long in the tooth. We stop caring about our own accolades, and instead focus on the joy and gratification of others.

The Missouri Trout Opener, which occurs annually March 1, is a celebration of fishing like few other events I have ever experienced. This is in large part due to Missouri being home to four exceptional trout parks. The rest of the country should take note and replicate these parks.

Three of them are state parks: Montauk, Roaring River and Bennett Spring. The fourth, Maramec, is owned by a private foundation but managed by the Missouri Department of Conservation.

Each of the four Missouri trout parks are unique, but all offer exceptional trout fishing along with many other outdoor recreational opportunities.

Jim Washabaugh is the guru of the Missouri trout parks, and served as my personal guide to the greatness of these fishing destinations back in 2014. Jim is also the author of "Fishing the Missouri Trout Parks," the definitive guide to these super cool fishing hot spots.

Jim is the most knowledgeable Missouri trout fisherman I know, and he gets giddy when he speaks to people about the parks. He is a true ambassador for the Missouri trout parks.

"There is nothing else like the trout parks we have here in Missouri," Washabaugh said. "Generations of families are attached to these parks, building lasting memories through trout fishing. And opening day is like their Christmas."

The trout parks are an anomaly of sorts. Most trout fishermen seek solitude and release the fish they catch. The four Missouri trout parks can be quite crowded and most of the fish are kept. But this is the culture and what makes the parks special.

When I explain it to my out-of-state trout fishing friends, those who feel if you can see another fisherman they're too close, I tell them you have to experience the vibe of these parks to really understand what's happening here. It's a fishing party. It's a celebration of trout.

Standing shoulder to shoulder with other fishermen anywhere else would be torture for most, but at a trout park you just sense this overarching appreciation for the other fishermen because everyone is in the same boat.

Everyone there loves fishing and you feel this positive energy from the crowd. It's children with Snoopy poles standing next old timers with bamboo fly rods sharing the same thrill of just trying to catch trout. They're embracing fishing on a grander scale than individualized interests. It's awesome.

Bennett Spring is the most popular Missouri Trout Park. The spring from which the park derives its name is the third largest in the state, producing an average of 100 million gallons of water each day. Located near Lebanon, Bennett Spring dumps into the Niangua River.

Roaring River is way down in the southwest corner of the state near Cassville. The trout fishing section is two and a half miles long, but it's narrow. There is no wading allowed at Roaring River, so you can leave your waders at home. This is an excellent location for children since they can cruise the bank fishing pool after pool.

Montauk, near Salem, is the most natural of the trout parks, and truthfully my personal favorite. The park is the headwaters of the Current River and just has more of a wilderness feel to it. I had one of those special moments when I fished the park a few years back and became a huge advocate after.

Using a 3-weight fly rod with 7x tippet, which is a very lightweight outfit, I was able to land a half-dozen trout in under an hour. They all fell victim to the time-tested Elk Hair Caddis dry fly.

I found a stretch of river that was shaded in the middle of the day, and the trout stacked up in there. They just liked what I had to offer and I liked the way they responded. It was magical.

Maramec Spring, near St. James, is the only Trout Park that isn't a state park. It's built on the site of the historic Maramec Iron Works. Many of the old structures still stand. You literally fish your way through history.

Each of the Missouri trout parks offer a slant on excellence. If you haven't experienced these magnificent destinations, I encourage you to do so. Be part of Missouri's trout celebration. It's worth the drive from anywhere in the Midwest.

Haul a camper, pitch a tent or rent a cabin. No matter where you stay, if you love trout and fishing for them, you should give the Missouri Trout Opener a try.

See you down the trail.

Brandon Butler is an outdoors columnist for the News Tribune. Contact him at [email protected]