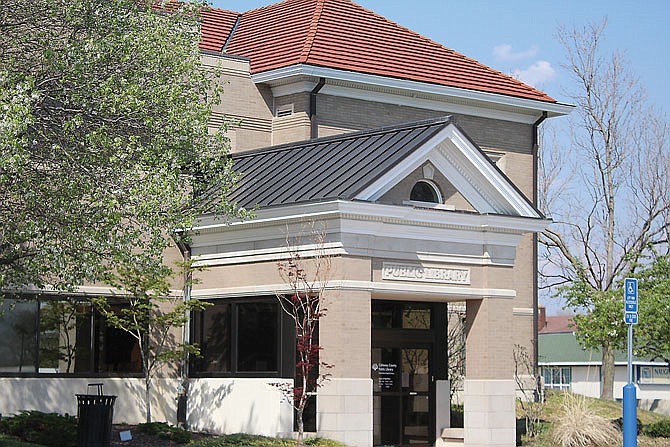 FILE: Lauren Williams, a 1991 Fulton High School graduate, presented on a topic called "Truth or Misinformation" to the Fulton Rotary Club via Zoom. She provided tips on how to navigate digital media. Williams is the adult and community services manager at the Columbia Public Library, part of the Daniel Boone Regional Library System and said a digital media seminar, "Fact, Opinion or Misinformation," is posted on the system's YouTube channel.

It isn't too difficult to find references to the Show-Me state in literature, from the famous to the obscure.

Most know of the literary successes of Mark Twain, while those in Callaway County might recall Henry Bellamann's
Fulton-inspired "King's Row."

On Tuesday evening, University of Missouri associate English professor Samuel Cohen shared other works that highlight the state. Cohen's talk was hosted by the Daniel Boone Regional Library and the Missouri Humanities Council.

"The particular history of Missouri has made it a place that has had to define and redefine itself," Cohen said.

Missouri was the starting point of many Western expeditions, the hub of the fur trade and a slave state bordering free states. Interwoven are the histories of forcibly removed native inhabitants, free settlers and explorers and enslaved individuals forced to labor in bondage.

William Wells Brown spent his youth in St. Louis before escaping slavery. A fierce abolitionist, his 1853 novel "Clotel" is considered the first novel written by an African-American. It was published in London and later the United States.

"Clotel; or, The President's Daughter: A Narrative of Slave Life in the United States" focuses on two fictional mixed-race daughters of Thomas Jefferson.

"Brown's novel is an attempt to convince his British readers to put pressure on the country to end slavery, seizing on the widely rumored existence of Jefferson's enslaved children," Cohen said.

Though the characters Clotel, her sister, Althesa, and mother, Currer, are fictional, Jefferson did have at least one known intimate relationship with Sally Hemings, an enslaved woman who was his wife's half-sister and owned by the family. DNA studies indicate Jefferson fathered Hemings' children.

"Brown's purpose was not to show that the United States was rotten to the core from the beginning," Cohen said. "Instead, he wanted to portray it as a land of contradiction - a nation that's history is marked by parallel lines, one tracing the history of efforts toward equality and liberty, the other tracing the establishment and protection of an institution that's squarely against those efforts."

Cohen characterizes "Clotel" as a Missouri novel because of this purpose. As Cohen told viewers, Columbia is home to a statue of Jefferson, as well as his original tombstone.

Another Missouri author whose work pokes at American ideas about race is Mark Twain. In his lesser-known work "Pudd'nhead Wilson," Twain tells the story of two swapped children.

"Like 'Clotel,' it tells a story about multiracial characters under slavery," Cohen said. "Unlike 'Clotel' though, it was written not at mid -century but at century's end and by the son of a slave owner."

In "Pudd'nhead," a slave woman notices her "black" son and her master's "white" son have a similar appearance. She switches the two infants, hoping to give her son a better life and free him from slavery. The novel plays with the idea of nature versus nurture.

The conclusions of "Pudd'nhead" are murky. Cohen said that Twain was less optimistic than Brown.

"If you read late Twain, especially the things that weren't published until after his death, you know how deep the pessimism ran at the end of his career and how low his opinion of humanity in general had sunk," Cohen said.

Moving forward in time, Cohen also mentioned Jack Conroy, a writer who grew up in a
coal-mining camp near Moberly.

Jack Conroy grew up in a coal-mining camp near Moberly. His "proletarian literature" inspired by the labor movement fell out of favor during the Cold War.

"To read Conroy today is still to engage in an act of unearthing, not just of the work itself and of the man who wrote it, but of the whole half-buried history of labor, radicalism and writing in Missouri and in the Midwest," Cohen said.

"It serves as a helpful reminder in the current labor-hostile climate of our state of perennial efforts to pass right-to-work legislation that it has not always been thus - that there's a proud native counter-tradition available, one who's eye remained on the parallel line of equality, running alongside that of economic exploitation," Cohen said.

Shange wrote "Betsey Brown" about a young girl integrating the public school system in St. Louis. Shange herself moved to St. Louis as a child where she was bused to a white school.

"She saw a city that wasn't ready to grant her family full citizenship - a city she couldn't call her own and might never," Cohen said.

Nye grew up in Ferguson. In the poem "To Jamyla Bolden of Ferguson, Missouri" addresses a 9-year-old girl who was accidentally shot and killed in Ferguson in 2015.

Though not mentioned in the poem, Cohen tied the work into the history of race in Missouri - from discrimination and segregation to the shooting of Michael Brown in Ferguson in 2014.

"I'd like to take a quick look at Woodrell's 2006 novel 'Winter's Bone' because it belongs to what appears to be a different Missouri than that of most of the works and writers we've looked at tonight," Cohen said. "And because, thought it's set the closest to our own time, has been seen by some as timeless."

The novel gives a glimpse at a culture plagued by methamphetamine and poverty and has been likened to other "timeless" works such as Greek tragedies.

"'Winter's Bone' isn't really a timeless Greek tragedy about universal human frailties," Cohen said. "It's a document of a particular place in a particular time that readers might be more comfortable seeing as neither. It's a place in time marked by rising mortality rates due to the meth and opioid crises and other things that are themselves the effect of historical conditions."

He pointed to each work he presented as a reflection of Missouri and its history. Many of the authors and works discussed are available from the library.

Cohen began his talk with John Williams, author of "Stoner," "Butcher's Crossing" and "Augustus." Williams only spent a few years in Missouri, where he obtained his Ph.D. from the University of Missouri.

"I think of Williams as a Missouri writer because of his connection to my department, but also because his books helped me see something - something that I believe is central to Missouri in itself and in its place in the nation," Cohen said.

"Butcher's Crossing" tells of a brutal buffalo hunt out west and "Augustus" recalls the Roman Emperor. "Stoner" follows a protagonist from Booneville who spends his life as an academic at the University of Missouri. In each book, the protagonists try to understand and find themselves.

"It might be worthwhile to think of the state of Missouri not as something that could be described as a place with a fixed state, but rather as a state in a state of flux, of becoming," Cohen said.