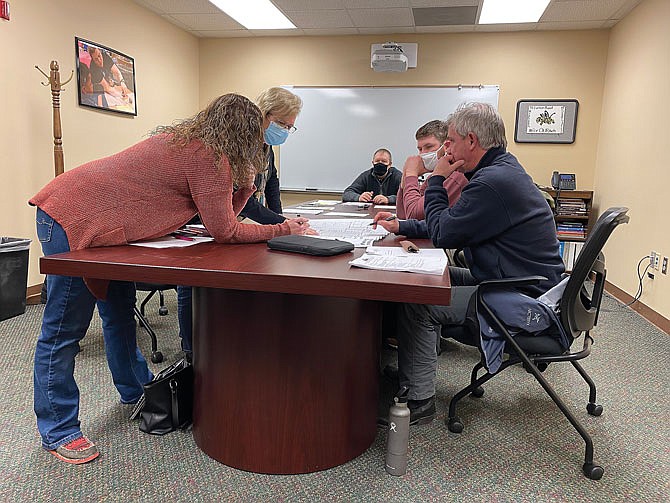 Once completed, the Fulton High School's planned competition gym project will change the look of the school.

As one of the larger projects, it will also be one of the things that comes to mind when people think of the $27.5 million Proposition S bond issue passed by voters last year. The vote allowed the district to move forward with a number of substantial technological, security and space upgrades across the district.

Now, the Fulton Public Schools Board of Education Facilities Committee is working with architects and construction managers to determine what exactly the new gym, lobby and entrance will look like and how much it will cost.

The committee met Wednesday afternoon to look at the latest architectural plans and discuss the scope of the FHS improvements. Board President Andy Bonderer, who has been deeply involved with the facilities projects, shared his construction expertise and helped answer fellow board member questions.

In addition to electrical and plumbing upgrades and a theater renovation, the largest item on the table for FHS is the addition of the gymnasium.

The committee is currently considering how large this new gym should be. It could seat anywhere from 1,200-1,500 people. Superintendent Ty Crain said the difference between the two sizes amounted to about $250,000.

Any funds left over after the priority projects could go toward other needs.

"This is going to be a symbol of the success of the bond issue - this part of the project," board member Joe Davis said. "This is what everyone's going to associate with the bond issue. Whether or not there are 1,200 or 1,500 seats, I'm not sure people necessarily will care, but maybe, we could do something really valuable with that money on the classroom side."

Board member Jackie Pritchett noted the kitchens at Bartley Elementary School as a need she would like to see addressed.

Board member Leah Baker suggested the district research the size of gyms at comparable schools before making a decision.

"I want to be able to walk in and feel pride in our facilities," Baker said.

Baker and Pritchett also advocated for larger restrooms - feedback the district will give to consultants The Architects Alliance.

The district's intention to balance cost with quality was frequently mentioned during the conversation.

A big unknown that will determine what happens at other district schools relates to Rice Hall, a property once used by the Missouri School for the Deaf as a middle school. The building has been empty for several years now - purchasing the building would be an attractive solution to the district's space problem.

But Rice Hall is state property, and the state hasn't given FPS a firm answer on whether the building might be up for grabs.

"They know we're interested. They know what we want to do with it, but we don't know what's going on," Crain said.

Crain has been regularly reaching out to the state to express the district's interest.

"I want to let them know we are ready, we have the money," Crain said. "The funding's here, and it will be great for the community."

If Rice Hall is on the table, the district believes the building could be renovated to house fifth and sixth grades as a new school. By moving fifth grade from the elementary schools and sixth grade from Fulton Middle School, classroom space would open up for other grades.

If the district has to go forward without Rice Hall, the plan is to add eight classrooms to FMS and to construct a new kindergarten center near Fulton Early Childhood Center.

As architectural plans and timelines are finalized, the district will post updates at bit.ly/36FqJLh.

Facilities will also be on the agenda Feb. 10 during the full board's next meeting.