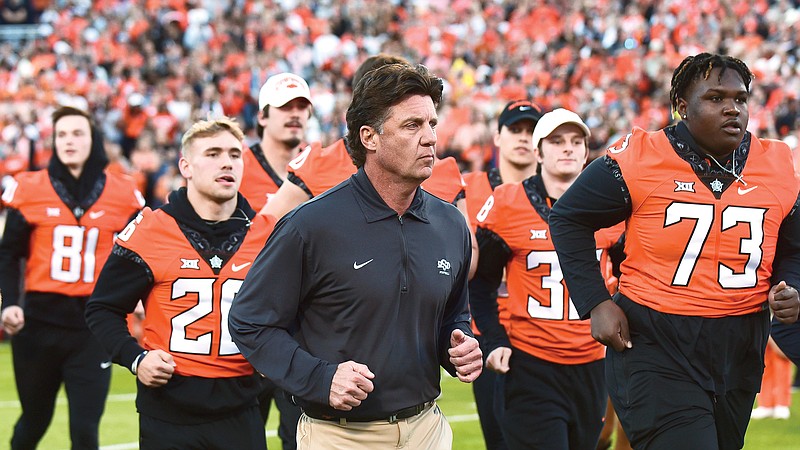 STILLWATER, Okla. (AP) - If Oklahoma State coach Mike Gundy seems more calm, cool and relaxed in this high-stakes season, it is only because he withstood the heat in the summer of 2020.

Running back Chuba Hubbard, a Black player who was coming off a first-team All-America season, suggested he would boycott the program after Gundy was photographed wearing a T-shirt promoting the One America News Network - a far-right news channel that had criticized the Black Lives Matter movement. Hubbard felt wearing the shirt was insensitive just weeks after George Floyd was killed by police and as protests against racial injustice were taking place across the country. Hubbard had support from other players, prompting concerns from the administration.

Gundy, who is white, took a step back. He appeared with Hubbard in a video and apologized for the pain his wearing the shirt caused. He said he was "disgusted" once he understood how OAN felt about the Black Lives Matter movement.

Eighteen months later, the Cowboys and their quirky, outspoken coach are putting the finishing touches one of the best seasons in program history. They have done it together, without any public signs of divisiveness or outbursts from their 54-year-old coach whose most viral moment until last year came when he was sticking up for a player.

Tylan Wallace, a former Oklahoma State receiver who now plays for the Baltimore Ravens, said Gundy made tweaks that bridged the disconnect with his Black players.

"After the whole incident, he had us sit down - the whole team in front of him - and asked us any questions that we had, any concerns, anything we wanted to get off our chest - tell it straight to him, upfront and personal," Wallace said. "So, I think that was a huge step for someone to sit there and take everything that we had to ask him."

"After that, he really made a big emphasis on trying to get to know each other," Wallace said. "Not just the players, but the staff and everybody in the program - just to make sure that we're all close and nobody was misunderstood. I think the biggest thing that we got from that situation is we became closer - not only as a team, but as a whole organization."

The players have continued to bond, and the wins have followed. If Oklahoma State beats Baylor today in the Big 12 Conference championship game, the Cowboys might qualify for the College Football Playoff.

It all goes back to how he handled those tough days last year.

"To his credit, he took that situation and all the negativity and listened and made a few changes," said Mike Holder, Oklahoma State's athletic director back when Hubbard raised his concerns. "And I think it made it better in the process. And because of that, I think it's showed itself in the results on the playing field."

Gundy didn't specifically address last summer when asked about it earlier this week, but he said he's confident things are as they should be.

"We've got a great culture here," he said. "You know, one thing people have to realize is we had six super seniors return this year to play. And if our culture and player-coach relationship wasn't good, those super seniors wouldn't have returned."

The players have reiterated throughout the season that team chemistry is one of the reasons they have been successful.

"It's just really simple," receiver Brennan Presley said. "The guy playing next to me - I'm playing for him. You can see that with our team - no one's being selfish. If another guy scores, everybody on the bench is cheering. It's really the culture that we've always had, and it's being brought to light more because we're winning this year."

Gundy took a $1 million pay cut last year after Hubbard's criticism. An internal review later found "no sign or indication of racism" in the program, though Holder said Gundy needed to improve his relationships with players.

On the field, Oklahoma State didn't miss a beat. Last year, the Cowboys went 8-3 and beat Miami in the Cheez-It Bowl. This season, the Cowboys ran out to a 6-0 start, and Gundy was rewarded with a contract extension that will keep him on a perpetual five-year deal.

Gundy appears to be having the time of his life.

"It's just fun for me to be along for the ride and be the coach and watch these guys practice during the week," Gundy said after the 63-17 win against TCU. "Their focus, their discipline, their toughness, their willingness to exert themselves during the week and just play hard - they have a smile on their faces, they compete, they like each other. It's a lot of fun for us as a coaching staff."

Gundy's example has been helpful in tough moments such as when Oklahoma State trailed rival Oklahoma in the second half before rallying for a 37-33 win.

"The whole team knows we have to stay composed," said linebacker Devin Harper, one of the super seniors. "We had our ups and downs, and when we're down, everyone is there to pick each other up. Coach Gundy tells us all the time that leaders have to lead, and we do, no matter the circumstances. We're going to lead and fight no matter what."

Getting to this point seemed unlikely after Hubbard's stand. But the foundation that Gundy had set years earlier provided avenues to work through the crisis.

"The players feel that the coaches care about them," Gundy said. "They know that we listen to them and we're not against making changes to modernize the organization and the culture we have here."

"I think all of this just shows Mike Gundy's growth, not only as a coach, but as a person," Holder said. "I think it really bodes well for now, but more importantly, in the future, because I take this as a sign that his best coaching days are in front of him."