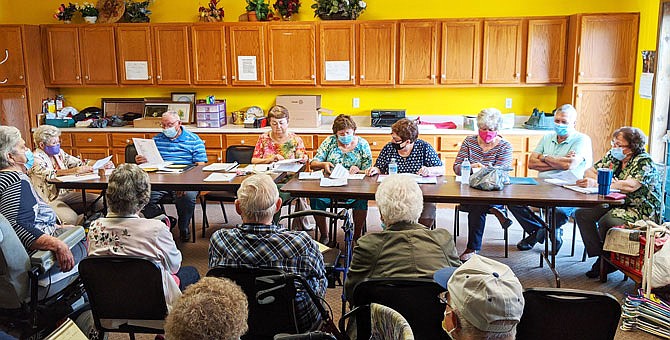 During a meeting of the Callaway Senior Center board Tuesday, secretary Bonnie Mann resigned and Diane Watson was removed as board president. Three new board members were appointed.

The Callaway Senior Center shake-up continued Thursday with the resignation of board secretary Bonnie Mann, the removal of Diane Watson as board president and the appointment of several new board members during a meeting.

Charles Ausfahl, Ed Barrioz and John Harris - each men with a long history with the center - rejoined the board during Thursday's meeting as the center grapples with the loss of its administrator and partnership with Aging Best.

"My health and energy aren't what they used to be, but I'm willing to fill in," said Harris, who helped craft the senior center's bylaws upon its founding some 20 years ago.

The Callaway Senior Center, located in Fulton, is owned by the CSC's elected board. Years ago, the board partnered with Aging Best to coordinate a nutrition program. Each of Missouri's 10 area agencies on aging, including Aging Best, receives federal funds by way of the Missouri Department of Health and Senior Services. With these funds, they're required to provide services including home-delivered and "congregate" meals within their service areas, among others. Aging Best rented space in the center; paid for the center's phone and internet service; and employed a cook, a dishwasher and center administrator April Redman.

The break between Aging Best and the senior center happened during Redman's firing on Sept. 14, following weeks of conflict between Redman and Aging Best about the nutrition program and its funding. Redman said Aging Best never provided a budget for the current fiscal year. She also questioned how Aging Best was spending the $4 apiece seniors donate for meals at the center - money that goes into an account accessible only by Aging Best.

Redman claims Aging Best had plans to cater all congregate meals served at the senior center from Jefferson City - which would cost seniors more and eat into the center's federal funding while providing no additional benefits. That plan would also eliminate the cook and dishwasher positions at the senior center, she said.

"There was a suggestion made that bringing in food from another center temporarily could ensure that there was no disruption in services when the Callaway center was suddenly without a cook not too long ago," Nowlin wrote in response to a question about that plan. "That would have been an option until the center had necessary staff hired and trained."

Nowlin noted the $4 seniors can voluntarily pay for their lunches at Callaway doesn't even cover the full cost of the meal, once you factor in expenses such as cooking equipment, phone and internet bills, and employee wages.

Ann Barker, employed by Aging Best to administrate the Conway Senior Center in tiny Conway, said her center's board has been having issues with Aging Best for the last six years.

"Our senior center is working on the process of going on our own," Barker told the Fulton Sun this week. "We pay for literally everything and yet (Aging Best) has control over everything."

Like the Callaway Senior Center, the Conway center hasn't received a budget for the 2020-21 fiscal year, she said.

"Going on our own is kind of scary, but now we pay for everything but Annie," said Tom Carr, president of the Conway Senior Center's board. "We pay for our raw foods and homebound meals. The only thing don't pay for is (Annie's salary), unless she takes insurance, and then we owe them $3,000."

He claims Aging Best stopped paying for a cook to prepare meals at the Conway Senior Center and instead catered meals from nearby Lebanon. Unhappy with Aging Best, his board is now strategizing about how to raise enough funds to keep the center running on their own - and they'd like to hire Barker if Aging Best fires her, he added.

In addition to the conflict between Aging Best and Redman, Callaway Senior Center board members were also in conflict among themselves.

Namely, some board members questioned whether Katherine Bader and Randy Stevens - both of whom joined the board this year - were actually duly elected by a majority of board members. The board's minutes don't provide clear evidence one way or another; minutes from a July 23 meeting simply note "Katherine Bader was voted onto the board" without listing which board members voted for or against her appointment.

These members, including treasurer Robert Schneider, also questioned Bader's suitability to serve: Bader has misdemeanor convictions for passing bad checks dating to 2011-12, and a felony conviction for the same dating to 1997.

Current bylaws do not actually forbid people with past criminal convictions from serving on the board.

Mann also alleged during Thursday's meeting that Stevens and Bader were related, presenting a conflict of interest, though that doesn't appear to be true. Mann rescinded the allegation and said it was just a rumor after being contradicted by Watson.

Simultaneously, Bader and Redman claimed Schneider's presence on the board was a violation of the board's own bylaws, which state that members may only serve two two-year terms on the board. They also said his wife Mary Schneider's participation on Aging Best's advisory council constituted a conflict of interest.

The bylaws do forbid Aging Best employees and their immediate families from serving on the board but do not mention Aging Best advisory council members.

Robert Schneider said he's served on the board on and off for about 18 years and was actually voted treasurer for life.

"That should've been put in the bylaws, but I don't think it was," he acknowledged Thursday, adding he and the board plan to amend the bylaws soon.

Harris' appointment to the board also may run afoul of those bylaws - he served on the board from at least 2008-14. (The Fulton Sun was unable to acquire board member lists from before 2008.)

Bader resigned during a meeting Sept. 16, along with Frank Raschert. Then, during a closed meeting Sept. 18 at the office of attorney Tom Riley, remaining members (aside from Stevens) drew up a resolution declaring Stevens and Bader were not board members. The same resolution also barred Bader, Redman and Stevens from entering Callaway Senior Center grounds and also forbid them from accessing the center's Callaway Bank account (which Schneider said they never had access to in the first place).

At the beginning of Thursday's meeting, the board included Watson, Mann, Schneider, Patsy Dillon, Bonnie Mann, Betty O'Neal, Betty Woodson and Holly Dudley. Mann announced she planned to resign at the end of the meeting, and Woodson moved to remove Watson as board president (thought not from the board).

The morning of Sept. 14, Watson asked Redman to stay in the building and not hand her keys over to Aging Best until the board could hold an emergency meeting. Watson also ordered the building's locks to be changed - apparently without consulting some members of the board. Nowlin said her organization's inability to access the building triggered the decision to end Aging Best's relationship with the center.

"There were extenuating circumstances but I didn't follow the rules," Watson acknowledged during Thursday's meeting.

Later in the meeting, a new slate of officers was appointed: Schneider returned as treasurer, Barrioz was appointed assistant treasurer, Woodson as vice chairperson, Ausfahl as president and Harris as interim secretary.

Board members agreed to continue pursuing a renewal of the relationship with Aging Best, though last week, Nowlin indicated Aging Best was uninterested in continuing to administer the center.

"Aging Best does a tremendous job - they do their best for the senior center," Schneider said.

The board has retained Riley to aid in that process.

"I can relay that I spoke with Rebecca Nowlin earlier this week," Riley stated in an email Thursday. "I haven't met with her yet as I'm out of state, but we discussed setting up a meeting to explore how Aging Best and Callaway Senior Center could work together now that the management issues are being resolved. We had a frank and productive discussion on what she saw as some of the issues we should address, but that meeting will likely be late next week or shortly after that."

If the board can't convince Aging Best to come back, they'll have to handle the center's fundraising, food donation soliciting, cooking, and phone and internet bills - all things Aging Best employees handled previously.

Callaway County United Way Director Megan Prenger promised to do what she can to help, with or without Aging Best. (CCUW provides thousands of dollars in funding annually for the senior center.)

"The last thing we want to see is the doors to the senior center closed," she said. "You've got to go forward. We've got big ideas for you guys."