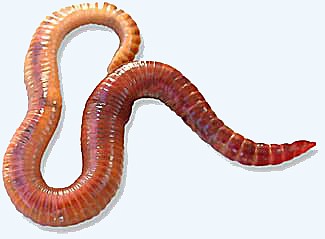 Red wigglers (Eisenia fetida), a species of earthworm often used as live bait by anglers, is also an invasive species in the United States.

Missouri is under siege by a creeping invasion - and many people see the invaders as allies.

"In general, people have good opinions about worms," said Missouri Department of Conservation naturalist Rena Schmidt, who hosted a virtual program on the topic Friday. "We've been taught over the years, if you have worms in your garden, it'll help. That's not true for natural ecosystems here in Missouri."

Commonly heralded as a friend to gardeners and anglers, earthworms are actually invasive in Missouri, according to the MDC. And they can seriously damage native forest ecosystems by compacting soil, damaging roots and out-competing native creatures.

"The earthworms that you find in your garden outside, they are exotic," Schmidt said. "Exotic means they come from another country - they are not native to the United States."

In fact, if you live in Missouri, you've probably never seen a native earthworm. Missouri's worms were wiped out thousands of years ago when the Ice Age's glaciers scoured the northern United States. In their place, other species ranging in size from bacteria and fungi to many-legged millipedes multiplied in the soil. (A few native earthworm species survive elsewhere in the United States, though they now have to compete with the introduced species.)

Working together, those native species gradually decompose the leaf litter and dead plant detritus in forests and other natural environments. That gradual decomposition process produces a thick blanket of rich, fluffy soil.

But when earthworms arrive, they speed up the decomposition process significantly, devouring the leaf litter's nutrients before native species and plants can take their share. In fact, they decompose the leaf litter faster than it can be replenished, meaning the layer of leaf litter becomes increasingly thin.

"This affects plants, because with less leaf litter, there's not as much insulation of forest floor," Schimdt said. "This makes plants more susceptible damage from to hot summers and cold winters."

And instead of aerating the soil - which is beneficial to plants' roots - earthworms can actually make it more compact. The (comparatively) large tunnels they leave in the soil are prone to collapsing. Sometimes, they'll even eat plants' roots.

Schmidt said most exotic species of earthworm found in Missouri come from Europe, though a few are native to Asia.

"When settlers came over to colonize the United States, they brought over plants, soil, things like that which carried these earthworms," she said. "They were prolific, they spread all over the place."

By themselves, earthworms only spread about 30 feet per year. But in recent decades, they've had a lot of help: People spread them by moving around mulch and soil and by releasing their leftover bait on fishing trips.

"A lot of our fishing bait are red wigglers and nightcrawlers," she said. "A lot of the time, people will just dump these. ... When you have multiple points of introduction, they spread very quickly. If you're digging in your garden, you'll probably see a lot of worms."

She mentioned several of the more commonly seen species, including nightcrawlers (the largest in Missouri, often seen after a rain), the rosy-tipped worm (one end is translucent and pleasantly pink), and the red wiggler (it's red and wiggles).

The most recent arrival, and perhaps one of the most dangerous to the environment, is the "jumping worm." Unlike other earthworms, they can spread up to 100 feet per year. They're easily recognizable - they have a pale ring (the clitellum) near one end, and when disturbed, they wriggle frantically, more than a typical worm.

"These worms are crazy," Schmidt said.

So far, they've only been spotted in urban regions of Missouri. But because they spread so quickly and like cool, damp soil, they could quickly take hold in forests if introduced there, putting more strain on an already-weakened ecosystem. Schmidt asked viewers to kill any jumping worms they see.

Earthworms aren't all bad, Schmidt said. In the garden, they can help convert kitchen scraps and yard waste into useful compost. Some native birds, amphibians and reptiles happily eat worms. But the overall impact of earthworms on Missouri's forests and other wild areas is negative.

In a strange turn of events, earthworms may even be responsible for the spread of giant ragweed - a weed that damages crops and triggers allergies in many humans.

Luckily, there are things Missouri residents can do to help slow the spread of earthworms from gardens to the wild.

Instead, put the container of worms in the trash.

"Also, when you buy soil and mulch, make sure you're using those in your garden instead of dumping somewhere," she added.