'Most culpable person' in Carl DeBrodie death, cover-up gets 17.5 years in prison 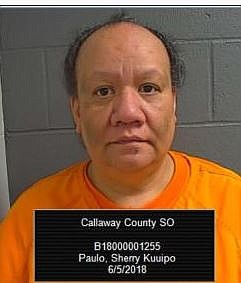 Sherry Paulo was sentenced in federal court Tuesday to 17.5 years in prison for causing the death of Carl DeBrodie then trying to cover up his death.

DeBrodie's loved ones, however, do not want him to be remembered only by the court proceedings regarding his cruel treatment and death, as detailed in court documents.

DeBrodie, 31, was a developmentally disabled resident of Second Chance Homes of Fulton, a care facility on Claymine Drive. He was reported missing April 17, 2017, and his remains were found six days later encased in concrete in a Fulton storage unit, though an investigation determined he had actually died in 2016.

Paulo and three other members of her family who also worked at Second Chance Homes have pleaded guilty to involvement in DeBrodie's death. Paulo pleaded guilty in November to one count of depriving DeBrodie of his civil rights - by willfully failing to provide necessary medical care to DeBrodie resulting in injuries that eventually led to his death - and one count of health care fraud arising from her efforts to hide DeBrodie's death.

Paulo was sentenced Tuesday in the U.S. District Court's Western District of Missouri in Jefferson City, receiving the maximum sentence provided in her plea agreement.

District Judge Brian C. Wimes said DeBrodie's death was "one of the most deplorable, depraved and disturbing cases" he'd heard.

Mary Martin, DeBrodie's former guardian, said after the sentencing of Paulo that "all Carl ever wanted was approval, and coleslaw."

Martin said if Paulo and her family would have given DeBrodie a hug or "an ounce of love," it would have made his day.

Carol Samson, DeBrodie's aunt, read in a victim impact statement to the court Tuesday that DeBrodie "was a lovely boy and the kid you just wanted to hug."

"Carl literally was a happy camper," Martin said of how she would like the world to remember DeBrodie.

Nicolas Clark, DeBrodie's brother, read in his impact statement to the court that DeBrodie was his late mother's first-born "and was her special boy. He was born with severe disabilities that did not allow him to talk, and my mom always loved him dearly and looked at him as a very special child."

DeBrodie had lived at Second Chance Homes since 2008, and he required constant care.

As the professional manager of Second Chance Homes, Paulo's responsibilities included providing care to residents and overseeing day-to-day operations. She was also responsible for taking DeBrodie to medical appointments and administering meal supplements and medication prescribed to him.

DeBrodie started to struggle to maintain a healthy weight in 2014. Paulo took him to a doctor who prescribed meal supplements, but Paulo stopped administering the supplements in 2015, and until DeBrodie's death she chose not to provide the supplements and other medications to him.

She falsified medical and Second Chance Homes records to cover for DeBrodie not receiving treatment and confined DeBrodie and a housemate in the unfinished basement of her personal home.

Confined in the basement - without his medication, running water, sunlight or fresh air - DeBrodie's health continued to decline, and his life ended in approximately September 2016 after a medical emergency that led him to stop breathing.

Paulo watched DeBrodie stop breathing, but despite knowing CPR and first aid, she did not attempt to revive him, nor did she seek medical help - out of fear she would be blamed for DeBrodie's malnourishment and death.

DeBrodie's body was left in the bathtub where he died for several days, but as the smell grew stronger, Paulo helped wrap the body in plastic and put it in the trash can that was then encased in concrete and stored.

Paulo continued to falsify medical documents - including with descriptions of DeBrodie enjoying snacks and dancing to music - but ultimately admitted DeBrodie was not present at Second Chance Homes once another company was scheduled to inspect and take over the home; that's when he was falsely reported as missing.

Federal attorney Julia Gegenheimer told the court Tuesday that Paulo was "the most culpable person" in the events leading to DeBrodie's death, being the key decision-maker in the family.

Gegenheimer said DeBrodie's death was not the result of some unexpected or unfortunate decisions, but Paulo "knew what she was doing was wrong."

Wimes told Paulo that DeBrodie "had the misfortune of being placed with you" and said her sentence was "specific deterrence" to make sure she can never do something like it again.

Paulo declined to make any statement to the court Tuesday.

Paulo would be 72 years old at the time of her release and would be under supervision until she's 77.

She also owes the government $106,795 for Medicaid charges made for services that were never actually provided to DeBrodie between September 2016 and April 2017.

Anthony R. Flores - Paulo's husband - and their son Anthony R.K. Flores are scheduled to be separately sentenced Wednesday before Wimes in the same courtroom for their roles in covering up DeBrodie's death.

Daughter Mary K. Paulo has not yet had a sentencing scheduled.