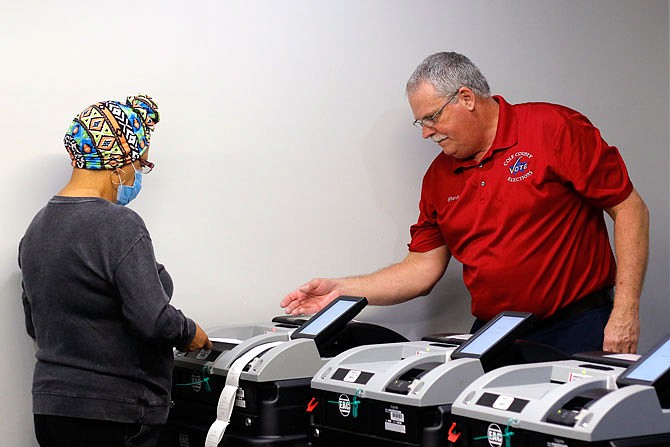 Despite worries there will be delays on Election Day due to the increase in absentee ballots, Mid-Missouri county clerks said they have taken steps to ensure there won't be delays Nov. 3.

The Callaway County Clerk's Office has had extra staff since absentee voting opened in September, County Clerk Ronda Miller said. The office will also increase staff at its polling locations to handle crowds, she added.

Since the number of mail-in and absentee voting requests by mail is up, Miller said, the office's certifying team will come in as early as the Friday before Election Day to begin processing ballots.

"I have all the confidence in my office and staff that we will be timely in processing the votes come Election Night," Miller said.

The Cole County Clerk's Office had issued 6,493 absentee ballots as of Friday morning and has had 3,336 voters vote absentee in the office, Korsmeyer said.

Due to the coronavirus pandemic and absentee ballot increase, Miller County Clerk Clinton Jenkins said, his office started offering a curbside absentee voting option, where voters can vote inside their vehicles. Voters must schedule an appointment with the county clerk's office by calling 573-369-1910, and they will be given instructions on where to park and the identification they need.

Once there, Miller County voters can vote inside their vehicles and place their ballots in a privacy folder, according to the county clerk's office. The ballots then go into the voting machine and are counted at that time.

Since ballots will be processed during the day, Jenkins said, he does not expect any delays on Election Day.

Moniteau County had received 552 absentee ballots as of Friday, "at least double than we normally do," Elliot said.

Despite being busier than normal, Osage County Clerk Nicci Kammerich said, her office has not made any operational changes for the upcoming election. She does not expect any delays due to the increase in absentee ballots.

As of Oct. 20, nearly 540,000 absentee ballots and nearly 57,000 mail-in ballots have been requested statewide, according to information on the Missouri Secretary of State's website. Nearly 424,000 ballots had been returned to local election authorities at that time.

Delays on Election Day aren't the only nationwide worries this election season.

This summer, there were concerns counties wouldn't have enough poll workers considering many are older and, therefore, at higher risk for contracting the coronavirus.

In Osage County, 63 volunteers have signed up to work as poll workers, even though the county needs only 50, Kammerich said.

"We have not had any issues getting enough workers for the election," she added.

Miller County also has seen an increase in volunteer poll workers for this election, despite losing about 10 volunteers, Jenkins said. His office has had more than 60 volunteers apply so far.

Cole County had 175 volunteer poll workers as of Thursday, Korsmeyer said, enough to fill all the necessary spots for the upcoming election.

Despite needing more volunteers, Miller said, the Callaway County Clerk's Office has had a "wonderful turnout of poll workers."

"Of course we require many more for this election, but still are receiving requests from people wanting to be election workers," Miller said.

Unfortunately, there are areas that have struggled to recruit the necessary number of poll workers, let alone any extras for unforeseen circumstances.

It was difficult for Moniteau County to get enough poll workers to work the November election, Elliott said.

"Thankfully, we have them, but do not have very many substitutes should something happen right before Election Day or on Election Day," Elliott said.

Moniteau County has the exact number of poll workers its needs to run its polling locations - 46 volunteers, Elliott said.