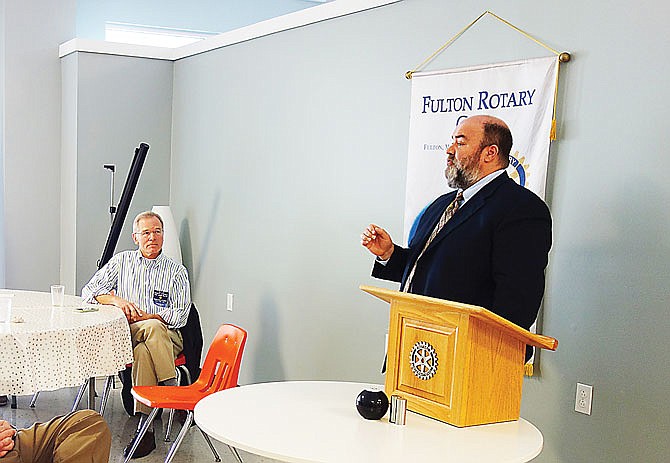 FILE: Callaway County Prosecuting Attorney Chris Wilson last spoke to the Fulton Rotary Club about a high-profile local criminal case in 2019. This week he returned, virtually, to talk about the case of Carl DeBrodie, a local disabled man whose death was concealed by people tasked with caring for him.

"I knew it would be a while before I could talk about the case," Wilson said. "I've since learned - well, I already knew - that the wheels of justice move very, very slowly in Washington, D.C. It took far longer than I ever hoped but that day is come."

With sentences secured for several key players in DeBrodie's death and the subsequent cover-up, Wilson spoke Wednesday at the Fulton Rotary Club to offer behind-the-scenes insights about the case. His talk revealed new information about the case and put to rest a persistent rumor about a "fight club" being a contributing factor to DeBrodie's death.

DeBrodie, 31, was a developmentally disabled resident of Second Chance Homes of Fulton, a care facility on Claymine Drive. He was reported missing April 17, 2017 - the day a new company was to take over operations at the individualized supported living facility - and his remains were found six days later in a trash bin encased in concrete in a Fulton storage unit, though an investigation determined he had actually died in 2016.

Multiple members of the same family, all of whom worked at the two Second Chance Homes facilities in Fulton, have been prosecuted for their involvement in the case.

Sherry Paulo, the family's matriarch who  the court documents as the "most culpable" family member, was sentenced last month to 17.5 years in prison after pleading guilty to one count of depriving DeBrodie of his civil rights - by willfully failing to provide necessary medical care to DeBrodie resulting in injuries that eventually led to his death - and one count of health care fraud arising from her efforts to hide DeBrodie's death.

"My impression of Ms. Paulo (through) her interviews she ran the show," Wilson said. "If she told (her family) to do something, they did it."

The couple's son, Anthony R.K. Flores, pleaded guilty to falsification of records in a federal investigation and was sentenced to three years of probation after a judge concluded he was unaware of his parents' actions. Flores also pleaded guilty to a state charge of making a false report or false statement of a missing person, a misdemeanor, and in February 2019 was sentenced to eight months in the county jail, minus time served.

His girlfriend, Shaina Osborne, also pleaded guilty to the same charge and was sentenced to 30 days in jail, but her sentence was suspended. She was ordered to complete two years of unsupervised probation and to stay off social media during her probation.

His sister, Mary K. Paulo, pleaded guilty to a federal charge of knowingly falsifying a document with the intent to impede, obstruct and influence an investigation. She has not yet been sentenced.

Two non-family members have also been charged in the case. Melissa DeLap, of Columbia, pleaded guilty in late 2018 to health care fraud, a federal charge. As a nurse, she was contracted to provide services to four Medicaid beneficiaries at Second Chance Homes, including DeBrodie, and signed monthly summaries claiming to have met face-to-face with the four patients when she had not. She has not yet been sentenced.

Finally, Tiffany Keipp, DeBrodie's support coordinator through Callaway County Special Services, was charged in March of this year with forgery, a state charge. She pleaded not guilty; the case has not yet gone to trial.

Wilson said he first heard about the case a couple days after DeBrodie was reported missing, when law enforcement began seeing "red flags" indicating they hadn't been told the full truth about the situation.

The first was when a Second Chance employee - not part of the Paulo/Flores family - pulled aside one of the incoming employees and said, "I'm not sure who you guys were looking for. I've been here since December, and I've never seen that man," Wilsons said.

This indicated to law enforcement that DeBrodie had been absent from the home since well before April 17.

"He seemed to know things that at first seemed fantastic, like it couldn't be true," Wilson said.

Following the lead, the Fulton Police Department executed a search warrant at a storage facility in Fulton.

"I remember vividly, I was sitting in this chair when Lt. Dall Hedges called me to say, 'I hope you're sitting down. I'm looking at a crate and we popped the top off and it's full of concrete,'" Wilson said.

First was the state of DeBrodie's body, which, according to Wilson and court documents, was so decomposed, the medical examiner couldn't determine a clear cause of death.

Another complication: A false confession. Another disabled individual residing at Second Chance told police he had murdered DeBrodie.

"That really was a complication - he'd given very graphic detail of how he'd done it, where it happened and who all was involved," Wilson said. "He was saying he'd murdered Carl with a hammer. He'd suggested (Sherry Paulo and Anthony Flores Sr.) were active participants in urging him to do this."

The man claimed this took place in Paulo and Flores' basement. A forensic team's thorough search of the area turned up no evidence suggesting a grisly murder had occurred there. Nor did DeBrodie's bones reveal signs of deadly blunt-force trauma, even to a team of experts including a forensic anthropologist. A few of his bones showed signs of previous breaks, but all had healed well and with proper medical care (aside from a more recent broken toe).

"It's not every day you have someone admit to murder and you decide they're not going to get arrested and charged," Wilson said. "But (Police Chief Steve Myers) and I were on the same page - we had some real concerns about what he was saying."

The same man told investigators he and other Second Chance residents had been forced to fight each other. That claim was repeated in a civil suit filed on behalf of DeBrodie's family in 2018, capturing the popular imagination.

"There's a lot of difference between civil case allegation and a criminal charge," Wilson said. "(Investigators) found no evidence to suspect gladiator-style pit fighting was going on."

Instead, investigators concluded DeBrodie's health began declining in 2014, with Sherry Paulo and Anthony Flores doing little to intervene (bit.ly/3jHBz8f). They ultimately moved him into the basement of their own home. Sometime around September 2016, DeBrodie suffered an acute medical emergency - a seizure or respiratory issue. Despite observing DeBrodie's physical distress and obvious medical need at that time, the couple admitted, they did not seek medical care for DeBrodie, and he died while in their home.

Then, led by Sherry Paulo, the family embarked on an elaborate ruse to cover up DeBrodie's absence from the home. At one point, allegedly under instruction from Sherry Paulo, Mary Paulo brought another Second Chance Homes resident to a doctor's appointment and passed him off as DeBrodie.

"They're a family whose entire income, for two generations, depended on this facility," Wilson noted. "When Carl died, it wasn't just a holy hell moment for one person, it was the whole family. Their silence was a product of, there's a lot to lose for all of us."

Wilson said the couple's children likely didn't know all the details of what happened to DeBrodie; family members weren't all at the same facility at the same time.

"You've got a family and no one's breaking that silence, and the ruse continues," he said. "Had that facility not been (taken over by new management), I don't know how much longer it could've gone on."

Wilson said he never directly interacted with Sherry Paulo, but he was able to observe her during interviews. He shared an anecdote from early in the investigation. Paulo was first interviewed by police before they found DeBrodie's body, and she was brought in for a second interview shortly afterward.

"Law enforcement, they've got their techniques," Wilson said. "The crate (containing DeBrodie) was in the garage/sally port area of the Fulton Police Department. Boone County Task Force 1 had jackhammers and saws working on that box and ultimately working on the concrete cube. Ms. Paulo was brought up to the department for another interview with that box sitting there. They 'accidentally' brought her through the garage area so she could see. The point being: We know, the lie needs to end. She was a lot more forthcoming during that interview."

By around September or October 2017, the Fulton Police Department had wrapped up its investigation and was prepared to hand it over to Wilson's office. Federal prosecutors asked to evaluate the case first.

"As the case progressed, they started looking at civil rights violations," Wilson said. "Basically that is a government actor doing something to a person to violate their civil rights, up to and including causing their death."

Wilson, DeBrodie's family and the Department of Justice conferred and decided that pursuing the federal charge for Sherry Paulo and Anthony R. Flores would be more likely to result in a longer prison sentence than pursuing state charges such as manslaughter. Due to a federal policy preventing pursuing charges against an individual for the same circumstances as a state-level criminal case - namely, DeBrodie's death - they couldn't do both.

"That was a bitter pill to swallow because we'd done an enormous amount of work and we were ready to move," Wilson admitted.

But, he added, "The choice made sense."

Also joining the meeting Tuesday was Callaway County Public Administrator Karen Digh Allen. Allen was appointed DeBrodie's legal guardian in 2008, but, she explained, at the time of his death in 2016, DeBrodie was under supervision of the state through CCSS and the Missouri Department of Mental Health. The public administrator's office is a county office with no authority over CCSS, she explained.

Individualized supported living facilities such as Second Chance Homes aren't actually licensed by the state, Allen added, rather they're handled as contractors by DMH. Allen said ISLs are paid $100,000-$300,000 per resident per year for those residents' care.

"There's a lot of money that goes through these contracts to the owners," Allen said. "The county has no involvement in that. The amount of money paid almost creates a scenario that invites deception if you don't have good people in there. We're assuming all those things are working, and all those people are doing their jobs."

Allen said DeBrodie's death intensified her belief ISLs should be licensed through the state, even though the idea may be off-putting to people who don't want disabled loved ones living in "facilities."

"And the state should be doing background checks - they should know who's working there," she said.