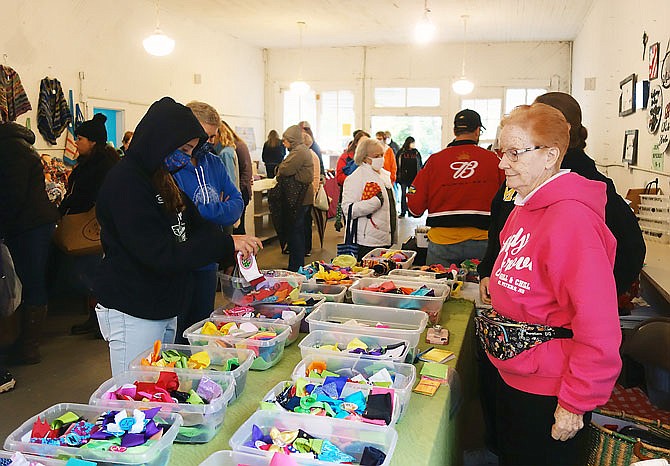 Kathleen Keane, right, set up her hair-bow booth in her usual spot Saturday. "Keane's Krafts" returns to the Hatton Arts & Crafts Festival each year, she said.

HATTON - Even on a chilly day in an unusual year, the siren song of crafts and home-baked goodies drew hundreds to the Hatton Arts & Crafts Festival on Saturday.

Among those vendors were both Craft Festival veterans and neophytes. Many expressed relief the festival hadn't been canceled this year, especially when so many other craft festivals have been.

Her booth, "That Darn Yarn," offered cuddly crocheted critters such as jellyfish, narwhals and starfish, more of which can be viewed on Facebook at facebook.com/thatdarnyarnstl.

Nahn said this was her first year attending the Hatton show, which she heard about from other craft vendors.

"I do a lot of these pop-up shops, as I call them, and you see a lot of the same faces," Pohl said. "We talk about which shows are good, and Hatton kept coming up. Typically, this is my oldest daughter's homecoming weekend, but this year, everything's canceled."

By 11 a.m. Saturday, she'd already sold out of pumpkin spice tea, and her "Hot Sassy Cinnamon" was going fast, too.

Many vendors at Hatton come back year after year, often reserving the same spot each time so loyal customers can find them easily. Kathleen Keane and her daughter, Katy Hague, are among those vendors. They offer charming hair bows under the name Keane's Krafts.

"This is our favorite craft show," Keane said. "Everyone's so accommodating, and the food is so good. We see the same people every year, and I love that."

Raymond Day, another returning vendor, filled his booth with hand-crafted baskets in sizes from small to enormous. He and his wife, Shirley Day, live in Glasgow and sell their crafts under the name "Country Craft Cottage" (bit.ly/36up4cs).

Day said he works all year to make the baskets; he brought an entire trailer-load of them to Hatton on Saturday. Normally, he'd visit multiple craft fairs in a year, but in 2020 most have been canceled, he said.

"This is the first large craft show we've gone to all year," he added. "We do have another one coming up in Warsaw."

Though masks weren't required during Saturday's event, organizers put other precautions in place. There were fewer indoor vendor booths. Additional outdoor seating areas encouraged visitors to spread out while enjoying snacks and meals. Signs reminded attendees of healthy practices and encouraged them to use the handwashing and hand sanitizer stations scattered across the grounds.