Department of Conservation: Beware of the zebra mussel 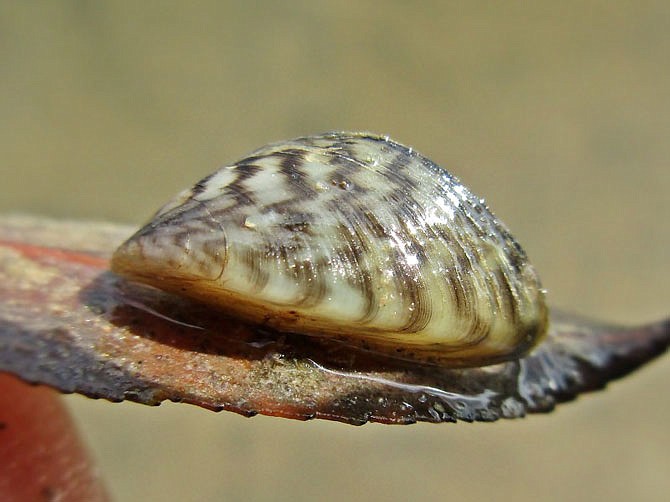 Zebra mussels — a type of tiny, striped and quick-spreading bivalve — have established a foothold in Missouri. It's up to local fishers and boaters to keep the problem from getting worse, according to the Missouri Department of Conservation.

The Missouri Department of Conservation encourages fishers and boaters to do their part in stopping a sneaky, stripy stowaway.

The zebra mussel, a tiny invasive bivalve, is spreading steadily across the state, MDC naturalist Alan Reed said. Reed gave an online presentation on the topic Tuesday. Not only can the zebra mussels damage boats, docks, water treatment plants and other structures, they can also cause the total collapse of entire food-chains, he explained.

"They're really very small, but they're very, very, very prolific," he said.

Zebra mussels (Dreissena polymorpha) are small, ranging from nearly too small to see to about the size of a nickel. They're pointy at one end, where their two shells hinge. They have alternating light and dark stripes, giving them their common name.

The mussels originated in the Caspian Sea. They hitched a ride on shipping vessels and showed up in the Great Lakes in 1988. They later rode barges down the Mississippi and Missouri Rivers and arrived in Missouri.

Recreational watercraft have since spread them to a number of large lakes, including Lake of the Ozarks, Bull Shoals Lake, Lake Taneycomo, Smithville Lake and Truman Lake. They're also present in many smaller rivers and streams feeding those bodies of water, such as the Meramec.

Though certain chemical treatments can destroy small populations of zebra mussels in small bodies of water, once they get established in a larger body of water, they're there for good, Reed explained.

"They really have potential to harm our native species," he said.

Like all mussels, zebra mussels are filter-feeders. They eat tiny plants (phytoplankton) and animals (zooplankton) they filter out of the water. Zebra mussels eat far more and reproduce far faster than native mussels.

"If you can remember your biology, those plankton make the very base of the food chain," Reed said. "So if they're gone, the things up the food chain have no way to survive."

One zebra mussel filters about a quart of water a day. That might not seem like much, but each female zebra mussel can produce up to 1 million eggs per year, each of which matures in just a few weeks.

With those plankton removed from the water column, the water becomes more clear. That allows sunlight to penetrate deeper into the water, heating it. With warmer water and more sun, algae and other plants can proliferate at greater depths and cause potential water quality issues.

Also unlike native mussels, zebra mussels have no serious native predators. Diving ducks and bottom-feeding fish like catfish eat a few, but they can't keep up - and zebra mussels are so sharp-shelled they cut the bottom-feeders' mouths. They can also slice people who swim or wade in infested waters, Reed said.

They also directly harm slow-moving native animals such as crawdads by clinging to them in great numbers, eventually rendering them unable to move.

Zebra mussels are primarily spread by boats and structures like docks that are moved from body of water to another without proper cleaning, Reed said.

Luckily, there are a few simple steps people who enjoy Missouri's waterways can take to slow zebra mussels' spread.

"It's an issue we can control if everybody's vigilant about them," he said.

Anglers and boaters should remember to:

"They can live for weeks inside the water of your outboard motor," Reed warned.

He also suggested running your hand along the boat's keel to feel for the tell-tale bumps of tiny mussels that have attached themselves to the boat's outer surface.

Reed emphasized the importance of keeping Missouri's water healthy and free of invasive species so future generations can enjoy them.

"I don't want to lose that resource, and I hope you don't either," he said.