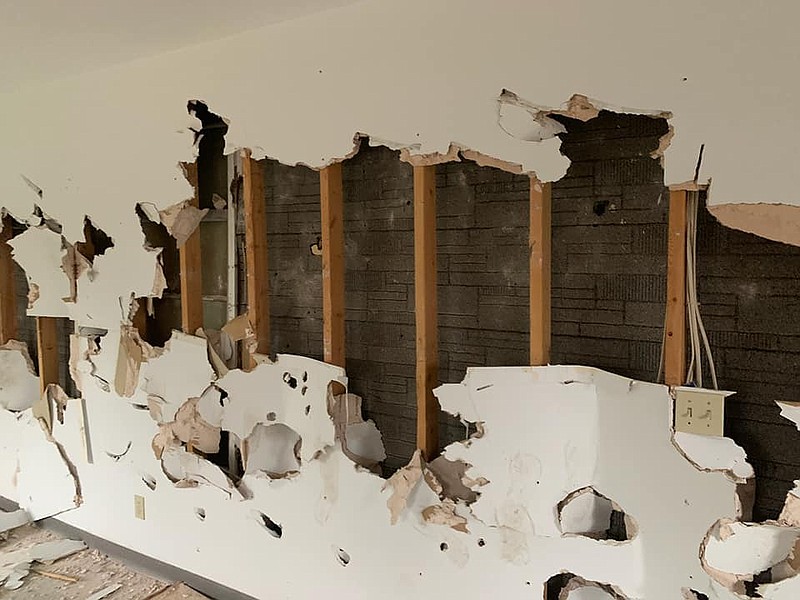 The Callaway County Sheriff's Office wants the public's help in finding the culprit or culprits.

"Frankly, the bad acts committed on this property during the early morning hours of (Thursday) are despicable and quite offensive," the CCSO wrote in an appeal on Facebook.

Deputies responded to the property at 11503 County Road 391 in Holts Summit at 1:32 a.m. Thursday following an alarm call. They discovered that both buildings on the property - both the historic church building and a newer one completed in the early 2000s - had been struck by vandals. Deputies are following leads now, but as of Friday no arrests had been made.

Tips may be provided anonymously by contacting CrimeStoppers online at callawaysheriff.org/crime-stoppers or by calling 573-592-2474. Any tips directly leading to the arrest of those responsible will be rewarded, according to the CCSO.

Photos shared by the Sheriff's OFfice and the church show what appear to be bullet holes and boot prints on the older building's front door. Windows are smashed and an air-conditioning unit tipped on its side. Interior photos depict massive damage: gaping holes in the walls, pews tipped over, toilets shattered, furniture smashed to kindling and strewn about. Scorch marks show where the vandals lit fireworks. Even the blades of the ceiling fans above the sanctuary are broken.

In the new church building, the vandal or vandals broke the building's security cameras and windows, tore out alarms and left butane fuel cartridges burning in the storage room, according to a post from a church member.

Pastor Gordon Coleman stated in a Facebook post that the damage at the new church building was "not as severe" as the damage in the older building.

Callaway County Sheriff Clay Chism said Friday that a final monetary estimate of the damages is still pending, but it "is significant."

Mt. Vernon was established by enslaved people in the early 1800s and later rebuilt in 1869, Coleman wrote. The church celebrated its 150th birthday in 2016.

"This small building has been the place of worship for a small, predominately African American congregation for nearly two centuries," he said. "The vandals destroyed the place where many souls were saved, people fed and spirits uplifted."

He asked for prayers for the end of "this type of evil" and that God would give the church resources to restore the historic building.

Chism said his agency is exploring all possible motives, but he acknowledged community concern that race could be a factor.

"At my direction, the FBI was given notice of our investigation," Chism said Friday. "If that motive is substantiated, the FBI stands ready to assist with federal resources."

Michelle Johnson, the church's director of technology and assistant treasurer, mourned the damage in a public Facebook post.

"Mt. Vernon is so much more than a church, it's a safe haven, it's our peace of mind, its rich history comforts us; my grandmother, grandfather, father, daughter, brother and loved ones are buried there," she wrote. "Mt. Vernon cemetery has unmarked graves of black civil war soldiers, slaves and black convicts dating back to the early 1800s. Our ancestors built this church and were proud of their accomplishments. The church still stands on its original foundation constructed from logs cut and carried by horse and buggy."

Church members catered hundreds of meals to Missouri legislators in Jefferson City to raise money for the new building. They broke ground in 2001.

Vandalism is nothing new for the church, according to Johnson.

"As long as I can remember, Mt. Vernon has experienced vandalism," she wrote. "Our mailboxes were burned down, windows broken and shot out, beer cans strewn over the cemetery, tombstones destroyed, trash thrown at the church, and the doors at the old and new churches were kicked in along with much more destruction. We have installed cameras and lights over the church, and they have been continuously knocked down and destroyed."

Chism confirmed the church property has been subject to repeated vandalism acts over the course of several years.

But, he noted, the community has been quick to step up and offer aid.

"We have an amazing community. I've already been contacted by multiple citizens (inquiring) as to helping the Mount Vernon congregation," he stated. "That stands to show such a despicable act as (the one) committed at Mount Vernon is not welcome in our local community."