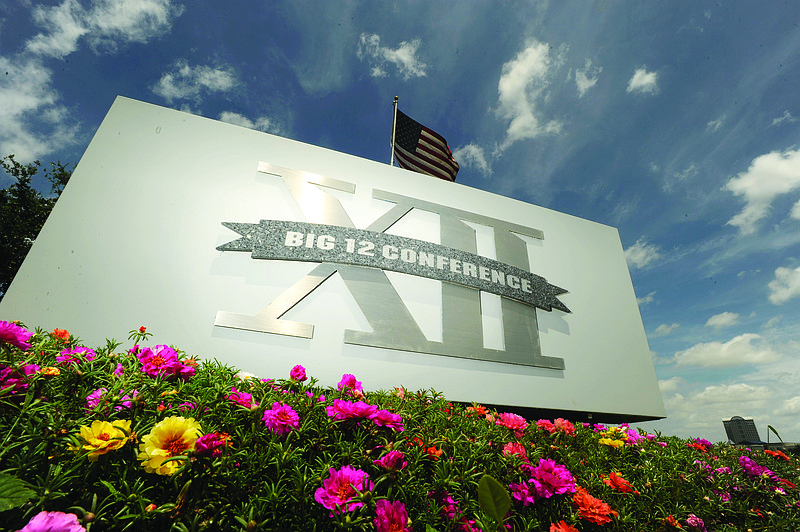 In this June 14, 2010, file photo, a Big 12 sign is seen outside the conference headquarters in Irving, Texas.

All 10 schools in the Big 12 Conference expect their campuses to be open in the fall, a key step toward launching fall sports.

The coronavirus pandemic has shuttered sports at all levels, and conference commissioners have stressed to Vice President Mike Pence college athletics cannot resume until campuses reopen. The Big 12's schools have all announced their intentions in recent weeks to have students on campus this fall.

If they follow through, the possibility exists that football can start as originally scheduled. The season is slated to begin Aug. 29, though Big 12 schools don't begin play until the following week.

Dr. Brian Hainline, the NCAA's chief medical officer, has said widespread testing will be crucial to having football in the fall. He has expressed cautious optimism that college sports could be played during the fall semester.

TCU coach Gary Patterson, president of the American Football Coaches Association, said his level of optimism is "very high" there will be a season.

"I think the closer we get to probably June 1 - a lot of people are starting to open things up a little bit more here in May - I think we're going to be able to make a lot better decisions on what all that looks like," he said.

Oklahoma plans to return to in-person education operations in the fall. Athletic director Joe Castiglione said last month several plans for starting football up are under consideration. Among them are starting the season on time, delaying it a few weeks, shortening the season or moving some of games or all of them to next spring.

"The good news is, I don't think individual universities are going to be making that decision," Castiglione said. "Whatever we decide will be done collectively though our conferences working together."

While Big 12 schools might agree on their hopes of opening on time, playing non-conference opponents brings extra challenges. TCU is set to open its season Sept. 5 at California.

Oklahoma State plans to have students on campus in the fall, and that can't happen soon enough for coach Mike Gundy. He been the most outspoken Big 12 coach, saying last month he had hoped for the football program to return to its facilities May 1. The school is moving carefully.

"As for a return to football, we will be ready to go when given clearance, but ultimately, those decisions are made above the athletic department level," Oklahoma State spokesman Gavin Lang said. "We need a lot more information before making any commitments to a timetable for football."

Texas said its goal is to re-open in the fall, likely with a mix of in-person and online courses. Outgoing school president Greg Fenves has said the school will offer a more definitive plan for re-opening by the end of June.

Kansas athletic director Jeff Long said he is preparing for football season to start on time, but emphasized everything is fluid. The school plans to have on-campus classes in the fall but is also working on contingency plans.

Kansas State recently furloughed 350 employees, but plans to bring them back for start of in-person classes in the fall. Second-year football coach Chris Klieman said his program would need two months of workouts and practices to be ready.

Iowa State president Wendy Wintersteen said the school is "planning on a full, normal operation for our universities for the fall 2020 semester," but an athletic department spokesman offered no details when asked how that would connect with football.

TCU chancellor Victor Boschini Jr. has announced the university intends for students to return to campus for the fall semester, with a planned start date of Aug. 24. West Virginia president Gordon Gee expects students in the fall and he hopes football can be played.

Texas Tech president Lawrence Schovanec last week said there would be a phased reopening for the fall semester, and he told the Texas Tribune the plan is to resume sports. Baylor has also announced plans to have students on campus this fall.