Social distancing without the distance 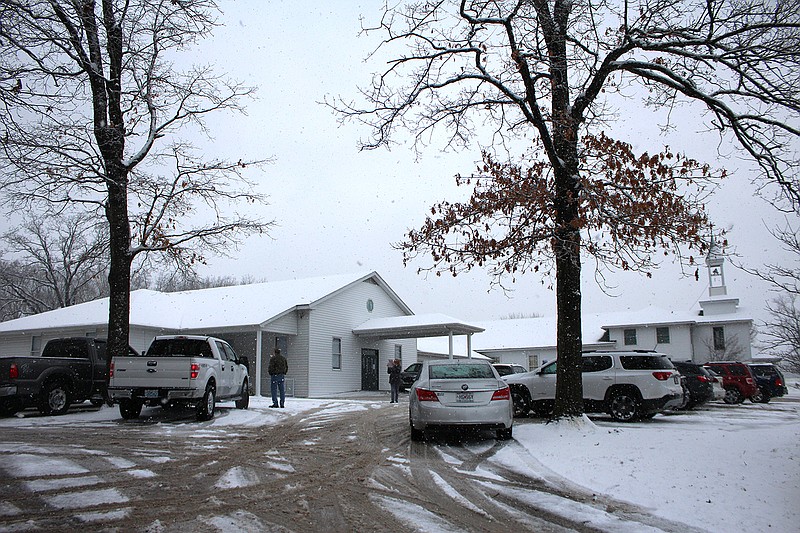 The congregants of Ebenezer Baptist Church have never been the type to miss a service, but not a single member walked through the sanctuary doors Sunday.

Instead, all the action took place in the church parking lot, where not a moment was quiet Sunday morning- lively music, earnest prayers and comfortable jokes, punctuated by the occasional honk of a car horn, filled the air as snow fell all around at Ebenezer's first drive-in church service.

"Just so you know, the snow is my fault," Rev. Mike Hibbard joked, commenting on the weather. "All day yesterday, I fervently prayed that God would prevent the rain. He answered my prayer - it's not raining."

The decision to move church outside, where attendees watched from inside their cars, was made not out of a desire to brave the elements or change up the scenery, but as a precaution to help slow the spread of COVID-19.

"You know with this coronavirus thing going on we had to change our music selection up a little bit - "We wanted to sing 'He Touched Me'," Norman Forman joked before launching into "Leaning on the Everlasting Arms" with wife Marty Forman.

Over the past week, nine cases of the global pandemic have popped up among students of William Woods University in Fulton. Ahead of the news that the illness had arrived in Callaway County, many local churches had already decided to move to virtual church services streamed over the internet. Something about that just didn't sit right with Hibbard or his congregation.

"There's something about God's people gathering together in corporate worship," Hibbard said. "It's important. I didn't want to give that up."

But Hibbard also understood the grave importance of acting responsible to protect his congregation. To come up with a solution, Hibbard called together the church leadership. During the discussion, someone brought up the example of Christmas light displays where viewers can drive by while tuning in on their radio. From there, the idea just took off.

"I left that meeting exhilarated - it was amazing," Hibbard said. "We have some of the best, innovative, creative people in our congregation."

This Sunday, Hibbard's sermon and music by the Formans drifted to congregants through open car windows, amplified with outside speakers. Next week, the church plans to have a new FM transmitter in place.

"These are unique circumstances, unique times, and it requires a unique response," he said.

Roughly 35 people gathered in the parking lot Sunday, with more watching at home through a Facebook livestream.

"I think it's important for people to see on another, to wave, to honk," Hibbard said, referencing how the congregation took up honking during the service in the place of the traditional 'amen.' "Church is a social event and taking the social aspect out of it leaves it wanting."

Before the service, Hibbard and a handful of other volunteers made their way car to car, stopping outside to offer donuts, coffee and bulletins.

"Pastors and politicians, we like shaking hands - there's something about the touch," Hibbard said. "But still, I knew that the spirit was there."

Unlike other business and organizations, like schools and restaurants, churches have not been ordered to cease in-person meetings. But Hibbard knew that if Ebenezer had a service and advised at-risk populations to watch remotely, there's a good chance many people would show up anyway.

"That's just the way that generation is - they were raised to be in church every time the doors were open," Hibbard said. "I see the safety aspect of it and as a shepherd it is my responsibility to keep the flock safe."

Standing outside, met only by the hum of engines and the sweep of windshield wipers, Hibbard spoke Sunday about trusting in God's plan.

"Who is that crazy preacher - the one who'll preach outside in the snow and in the cold?" Hibbard joked. "I've been called worse."