Kansas fight over abortion has debate turned 'on its head' 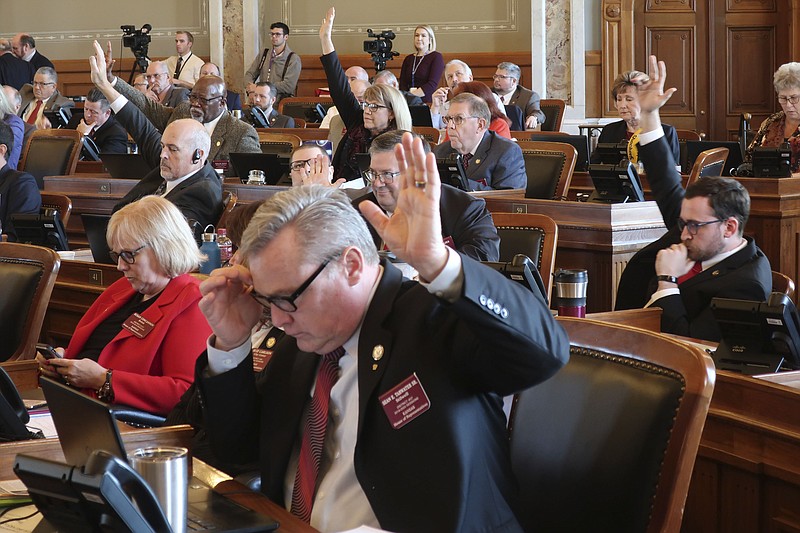 Republicans in the Kansas House indicate that they want a roll call vote on giving first-round approval to a proposed amendment to the state constitution on abortion, Thursday, Feb. 6, 2020, at the Statehouse in Topeka, Kan. The amendment would overturn a Kansas Supreme Court decision protecting abortion rights and has advanced to a final vote. (AP Photo/John Hanna)

TOPEKA, Kan. (AP) - Kansas legislators considering a proposed amendment to the state constitution on abortion are raising the spectre of women being forced back into going to unsafe and unclean "back alley" clinics if their measure does not pass.

But in a twist away from what's typical in such debates, anti-abortion lawmakers were making the argument Thursday as the House gave first-round approval to the proposed amendment. The measure would overturn a Kansas Supreme Court decision last year declaring access to abortion a "fundamental right" under the state's Bill of Rights.

In making their case for a measure aimed at ensuring the Republican-controlled Legislature keeps its long-standing power to limit abortion, supporters have appropriated language often used by abortion rights backers to fight proposed restrictions. Anti-abortion groups argue that without restrictions, clinics will return to being unsafe.

Abortion rights supporters find the argument ironic - and grating - after arguing for decades that women were forced to undergo abortions in unsafe conditions when terminating a pregnancy wasn't legal. They contend the amendment eventually will lead to an abortion ban - and return to the conditions that abortion opponents are claiming they want to prevent.

"Taking that pro-choice argument and flipping it on its head to suit the anti-choice argument - it really muddies the water," said Julie Burkhart, CEO of the Trust Women Foundation, which operates a Wichita clinic that performs abortion.

The proposed amendment cleared the Senate last week, so House approval would put the question on the ballot in the state's August primary, when approval by a simple majority of voters would change the state constitution. However, supporters didn't yet appear Thursday to have the two-thirds majority in the House they will need to pass it.

"Isn't the thought of unregulated abortion repugnant to everyone in this chamber?" said Rep. Susan Humphries, a Wichita Republican, who led anti-abortion House members in the debate.

The vote Thursday was 80-41, and set up another final vote Friday in the House. The amendment's backers will need 84 of 125 votes to pass it then, and they were working to bring reluctant lawmakers on board.

Republicans hold exactly 84 seats, but four of them broke with their GOP colleagues to vote no Thursday. Four Democrats did not vote, but House Minority Leader Tom Sawyer, a Wichita Democrat, said he believes none of them would have voted yes.

U.S. Rep. Sharice Davids, a Democrat representing the Kansas side of the Kansas City area in Congress, even jumped in, tweeting a 30-second ad showing her wearing pink boxing gloves with Planned Parenthood logos. Davids is former mixed-martial arts fighter.

"Make no mistake, this is a political attack on our fundamental political rights that will set Kansas back decades," she said in the ad.