Fulton, DNR team up to investigate mine runoff 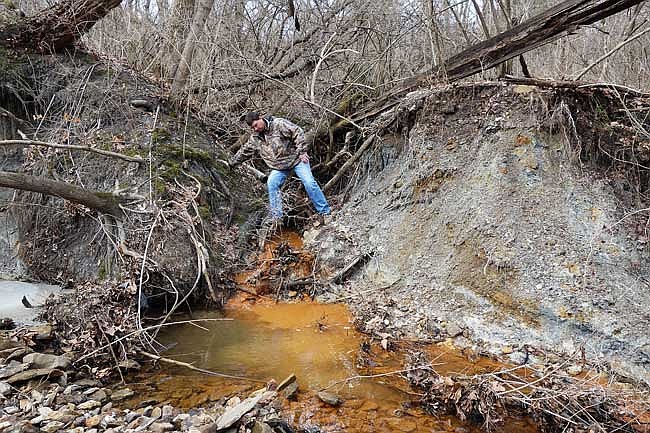 Mike Mueller, unit chief with the Missouri Department of Natural Resources' Land Reclamation division, investigates the source of a bright-red substance leaching into Stinson Creek. He suspects the source is an abandoned mine.

With the Missouri Department of Natural Resources' help, the city of Fulton is investigating whether abandoned mines around town could be impacting Stinson Creek.

"This is a place to start," said Courtney Coffelt, city engineering department member.

According to Fulton Director of Administration Bill Johnson, the city hopes to demonstrate to DNR that certain water quality issues along Stinson Creek stem from sources outside the city's control. Fulton regularly gets dinged on dissolved oxygen levels in the creek.

The city has already spent some $9 million-10 million on improving the municipal wastewater plant and is looking at spending another couple of million to enact further improvements. But, according to interim city engineer Kyle Bruemmer, water quality downstream of where the plant discharges is actually better than the water quality upstream.

"Residents of Fulton have been footing the bill for whatever's going on," said the MPUA's Lacey Hirschvogel.

"If we're successful (in demonstrating other sources are contributing), we may be able to get concessions and credit for the quality of the water," Johnson said. "We may be able to avoid spending several millions on additional improvements at the wastewater treatment plant. We're trying to save taxpayer money."

City engineers are eyeing several spots around town where water appears to seep from old mining operations. Officials hope if old mines are the issue, there may be some grant money available to help reduce tainted flow from the mines or otherwise mitigate the issue - without spending as much Fulton tax money.

The tour's first stop was at Red Creek, which passes under County Road 207 on the outskirts of town. The name is appropriate, according to Fulton water supervisor Dave Martin: if the water's low, the creek turns a bright red.

"It competes with the orange on the bridge top," he said.

On this particular day, however, snow runoff turned the creek a murky brown, though a small trickle of a tributary off to one side still looked ruddy.

Callaway County Commissioner Roger Fischer said the area was once heavily mined for coal and clay. Operations dated back to at least 1943, said Mike Mueller, unit chief with the DNR's Land Reclamation division. Land Reclamation did some work in the area after the mine closed, he said.

Next, the group drove to the dog park trailhead of the Stinson Creek Trail. A few yards below the old trestle bridge, a rivulet of water has cut a strikingly white ditch along the trail.

"People will be walking their dog, and they'll spot it, and they'll call us," Coffelt said. "They'll send us videos."

Following the water up through the trees leads to a barren OVERSET FOLLOWS:expanse of gray clay, carved into soft mounds by water. Nothing grows in the area, which is the size of a small pond and has a twin farther up the trail.

"It's total devastation - that's the only word I know for it," Coffelt said.

The land sits right behind Mo-Con, a local concrete manufacturer. At the city's request, Coffelt said, Mo-Con has placed several hay bales at the edge of the clay, where the water trickles down the hillside. However, she added, the water doesn't appear to be coming from Mo-Con: they capture and reuse most of the water they use.

"Mo-Con's been willing to talk and work it out," Coffelt said.

Instead, she and the city suspect the constant trickle of water suggests a spring burbling up through a clay mine operation in the area.

The final stop was at a small stream that flows into the Stinson near Old Jefferson City Road. The group parked at the Wallace Backer Nature Trail parking lot and followed the rust-red creek upstream to a small bluff. A mine shaft formerly opened at that spot, though it's now blocked off with concrete. Upstream of the mine, the water's clear; downstream, it's a murky red.

"That looks like typical acid mine drainage," Mueller said.

Coffelt mentioned a fourth potential abandoned mine located on land owned by Westminster College, which she hasn't had the chance to examine yet.

Mueller promised to send staff from his office back to test the water.

"We'll put this in the inventory as a water quality problem and work with the city to discover what the water quality's like," he said.

The difficulty, Mueller added, is that there's no easy fix for these types of situations - where a spring finds its way through an old mine and carries pollutants into a waterway.

Bruemmer said knowing what's going on will be a boon to the city when speaking to DNR and concerned locals.