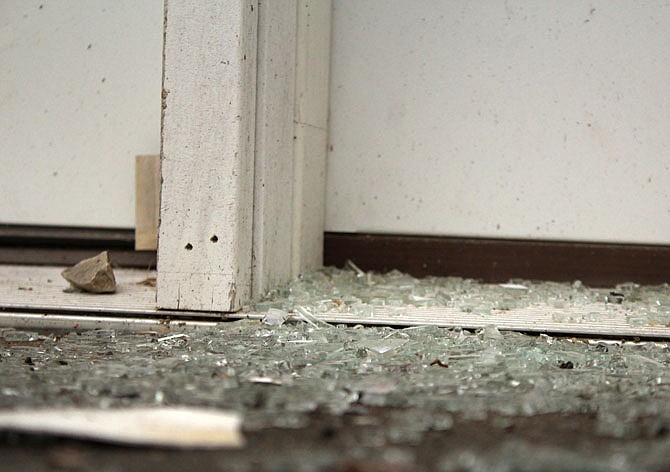 Instead of enjoying a peaceful Thanksgiving, the community was shocked by the destruction that occurred Nov. 25 - authorities found shattered windows, smashed-through walls, tipped over pews and furniture, scorch marks and bullet holes inside the historic Black church.

The vandals tripped an alarm at 1:32 a.m., and deputies soon arrived. The church property houses two buildings - an old church built in 1896 and a newer one built in the early 2000s. Both suffered damage, though the old building was hit more severely.

"The old church had suffered an extreme amount of damage - just a despicable act of vandalism," Sheriff Clay Chism said during a media update held Thursday in front of the new church.

Chism said investigators immediately got to work trying to discover who was responsible.

"Leads were being both followed and developed all throughout the weekend and into this week," Chism said. "On Dec. 1, we developed some leads that we thought were promising."

By yesterday, the investigators were ready to make the arrests. The four arrested will not be identified because they are minors. However, Chism said the teenagers are from the Holts Summit and Jefferson City area and that one is 14, two are 15 and one is 16.

All four were turned over to juvenile authorities and transferred to the custody of the Robert Perry Juvenile Justice Center in Columbia.

Early in the investigation, the sheriff's office notified the FBI of the incident in response to fears the destruction might have been racially motivated. Chism said that at this time, there is not evidence to support a hate crime investigation.

The Jefferson City Police Department and the Audrain County Sheriff's Office assisted the CCSO in locating suspects and processing evidence.

Chism said the FBI has stayed in contact, and if evidence is found the vandalism was motivated by hate, they will be able to step in.

"The FBI has assured me they stand ready at the drop of a phone call," Chism said.

Chism said many in the community provided leads in the investigation and reached out about supporting the church.

"What happened at this property, this church property, is not a good representation of what Callaway County really about," Chism said.

Callaway County is in the heart of Missouri's "Little Dixie" region. Thousands were held in captivity locally. In 1860, 28 percent of the county's population was black - almost all were enslaved.

The Mount Vernon congregation first came together before the Civil War when stories suggest enslaved individuals began meeting covertly in the woods.

According to a Fulton Sun article published in 2001 - back when the church was planning the construction of its new building - Charles and Margaret Mans gave the group permission to gather in a sheep barn. After the Civil War, the group bought the one-acre tract surrounding the barn for $1.

In 1885, member Ronald Childs purchased another acre for $25 from L.D. and Lillie Farmer. By 1896, the congregation had managed to construct a building - the same building the teenagers arrested this week trashed.

"This small building has been the place of worship for a small predominately African American congregation for nearly two centuries," pastor Gordon Coleman wrote in a Facebook post. "The vandals destroyed the place where many souls were saved, people fed and spirits uplifted."

This is not the first time the church has been the victim of vandalism.

"I've been with the county Sheriff's Office for just over 20 years," Chism said. "This church has been victimized before."

Chism expressed disgust at the act of vandalism.

Many members of the community have expressed an interest in donating to help the church cover the costs of repairs.

"We have received an overwhelming support and concerns from the community, and for this, we are extremely grateful and blessed," the church posted on Facebook. Representatives of the church could not be reached for comment Thursday.

Donations can be made online at tithe.ly/give?c=1904613 or by mailing donations to Mt. Vernon Missionary Baptist Church, PO Box 116, Holts Summit, MO, 65043. Include "Building Fund" in the memo line.