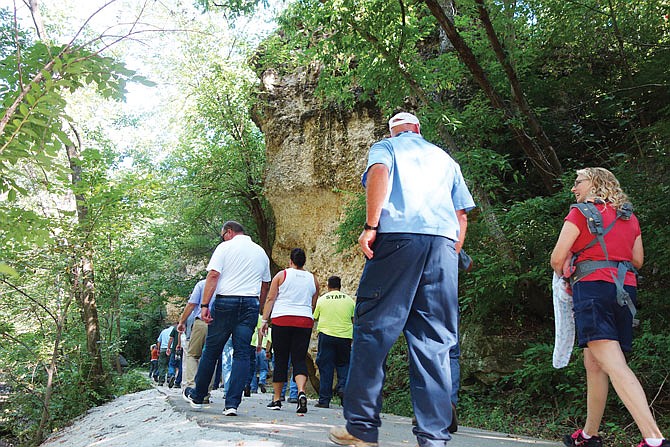 On Wednesday morning, representatives from the Missouri Department of Conservation, University of Missouri, and the cities of Fulton, Jefferson City and Columbia gathered to tour Stinson Creek and swap riparian area management tips.

During a tour of Fulton's Stinson Creek Trail on Wednesday, representatives from three cities swapped advice and resources for riparian area management.

"We don't get to talk together and learn from one another very often," said Ann Koenig, community forester with the Missouri Department of Conservation.

Koenig led the tour, which was organized thanks to the efforts of city engineering technician and Fulton Stream Team member Courtney Coffelt. At least 30 people joined the mile-long stroll along the creek. Participants included city employees of Fulton, Jefferson City and Columbia; representatives from the Missouri Department of Conservation and University of Missouri; and members of Callaway Master Gardeners.

According to participants, maintaining trails along riparian areas - that zone right at the border between land and water - comes with particular challenges. As in Fulton, city employees in Jefferson City and Columbia have to battle litter, erosion, flooding, debris and invasive plants along their creeks and trails.

They also must juggle the competing needs and desires of the environment and trail users. For example, plants along a creek's edge - especially trees and shrubs - send their roots down into the bank and help prevent erosion. But the people who use the trail might think overgrown undergrowth is unsightly, or might worry a mugger or other ne'er-do-well could hide behind the shrubs to pounce on passersby.

"We want the trail to be safe, too," said Dave Dittmer, forester for the city of Columbia.

Ray Wallace, Jefferson City's city forester, said his city has handled the issue in some areas by mowing a swath along the trail but leaving foliage futher away intact. They've put up signs informing people about the importance of erosion prevention.

"You have to educate people," he said.

With so many experts in one place, someone in the crowd had a potential solution for each problem mentioned.

For example, in one area near the Lover's Leap bluffs, only a few trees hang on along the stream bank, which sits quite close to the trail.

"If we lose one of these trees, we might lose the trail," Fulton interim engineer Kyle Bruemmer warned.

Dittmer shared that in similar spots in Columbia, the city dumps a load of large loose stones along creek bank's edge. They slow erosion, and as silt builds up among the stones, native plants are able to grow and make the heap look like a natural feature.

Koenig told attendees about some potentially handy resources, including the MDC's Tree Resource Improvement and Maintenance grants. Each year, the department hands out around $330,000 in $1,000-$25,000 grants to cities around the state. Cities must provide a match, but the amount of the match falls for participants in the Tree City USA program. Unlike nearby Jefferson City, Columbia and Mexico, Fulton isn't currently a member.

The process of joining is straightforward, Koenig said: Participants must have a "tree board" comprised of residents, spend a certain amount per capita on trees and tree maintenance, host an Arbor Day event each year and pass a tree-related ordinance.

Coffelt and other city employees shared some of their ideas for future projects and initiatives along the creek. Ordered from near-future to long-term goals, the ideas included:

Promotion of volunteer opportunities along the creek and trail, including litter and invasive plant removal. Coffelt said some areas of the trail are being choked by invasive bush honeysuckle. She and city public information officer Darin Wernig are working on an infomercial about volunteering, she said.

New memorial trees in the area of the stream near Memorial Park. Coffelt said the city has applied for a VFW grant that would allow them to plant 30 new trees in the area, providing shade and reducing algae growth in the creek. Some of the trees would be dedicated to Fulton residents who died fighting in Vietnam.

Replacing the bridge at Second Street. Bruemmer said the city is seeking a grant to replace that bridge in the next few years.

Extending Stinson Creek Trail. Fulton Parks and Recreation Director Clay Caswell said work on the Stinson Creek Trail first began in about 1999. Today, the trail stretches about 5 miles from the dog park east along Stinson Creek and north past Veterans Park and the YMCA. Eventually, Caswell hopes it'll trace west through the north side of town to form a complete loop. Previous phases of the trail project have been financed through grants from the Missouri Department of Transportation and contributions from the City of Fulton.

"This trail is really great, and you do a really nice job with it," Koenig said.