I-70 protestors call for action on housing issues 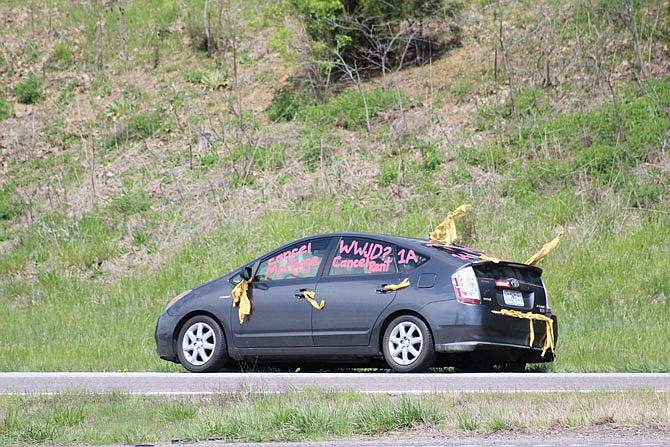 FILE: Dozens of Missourians pulled over alongside Interstate 70 between Kansas City and St. Louis in April 2020 to call for action on housing issues. One participant stopped near Kansas City.

When Deanne Lyons stopped her car alongside of Interstate 70 just before noon Monday, she wasn't thinking about car troubles.

When a Missouri Highway Patrol trooper pulled up to check that she was all right and parked safely, Lyons explained her motivation - drawing attention to housing challenges caused by the COVID-19 shutdown.

Her vehicle, decked out with pink scrawls of text reading "WWJD?" and "Cancel Rent" and yellow ribbons fluttering in the wind, caught the eyes of westbound travelers zipping by the mile 148 exit in Kingdom City for nearly an hour.

Lyons, along with her partner, Aaron Loker, and their canine companions, Leslie Feinbark and Lilith, were joined by 60 other Missourians parked every few miles along the shoulder of I-70. The protest stretched from Kansas City to St. Louis.

The goal of the effort by the Coalition to Protect Missouri Tenants was to bring attention to housing problems and homelessness during the COVID-19 pandemic and demand action from Gov. Mike Parson.

The coalition, which includes more than 50 community, labor and faith organizations from across the state, has outlined multiple demands, including a rent and mortgage suspension, an eviction moratorium and an expansion in services for people experiencing homelessness.

When explaining what else they believe can be done, the housing advocates point to Kansas Gov. Laura Kelly. In March, Kelly signed an executive order freezing mortgage foreclosures and rent evictions during the pandemic.

They want Parson to take similar action before May 1, when rent payments will be due for many Missourians.

During his Monday media briefing, Parson addressed the protesters' concerns, saying he has been in contact with Missouri mayors to discuss solutions to helping homeless populations deal with the pandemic.

"The eviction process has the courts to deal with the eviction process on that," Parson said. "We're not going to do an order for the entire state to allow people not to pay their rent. There's a process in place for that, and that system needs to work."

Lyons drove all the way from Rolla to participate because she understands what it's like to worry about having a place to live.

"I have been housing and food insecure as a child before," Lyons said. "Even as an adult, I've done my fair share of couch-surfing."

The era of social distancing and stay-at-home orders has brought about new challenges for those wishing to protest safely. The display of parked vehicles represents one way the group came up with to draw attention without gathering in a crowd.

"It's a way to make sure that we do feel together," Lyons said.

Listeners heard as one woman described rising child care costs and plans to sell her plasma to afford rent.

"Without a miracle, I won't be able to pay rent on May 1," said another woman who was laid off because of the pandemic. "Whatever initial shame and sadness I felt is gone - now I'm just furious. By no fault of our own, my family is being pushed to the brink."

Record numbers of Americans have filed for unemployment benefits since the pandemic began.

Lyons said she hopes the protest helped bolster the spirits of anyone in passing cars who is facing financial struggles due to the pandemic.

"I hope for anyone that is feeling alone, they see us and know that there's someone who has their back and they're not alone," Lyons said.