Social isolation not so bad on sheep farm 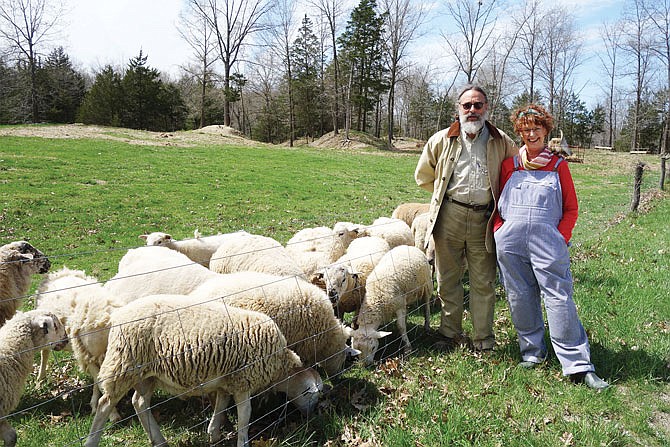 ABOVE: David Coplen, left, and his wife, Carol Fulkerson, have been raising sheep together on their farm near Fulton for more than two decades. Today, they have around 100 ewes producing some 200 lambs per year, though, they're pictured here with their rams.

Standing outside at Birch Cove Farm, it's easy to forget the horrors filling the news.

Dozens of sheep graze the green fields, calling to each other with baas ranging from soprano lambs to tenor rams. Two shockingly large, fluffy livestock guardian dogs keep an eye on the flock. Birds sing in nearby blooming redbuds. It's like a living page from a children's coloring book about spring.

The couple moved to their plot of land near Fulton in 1991. Fulkerson was teaching social work at William Woods University, while Coplen worked in Jefferson City.

"We just wanted to be out in the country," Coplen said. "We weren't thinking about farming."

Two chance factors combined to launch their interest in sheep: They started an organic garden, and Coplen's lawnmower broke down three times in quick succession.

"I was working (in) budget and planning at the time, and I realized, 'I'm treating grass like it's a liability - what if I treated it like an asset?'" Coplen said.

He reasoned a few sheep would keep the grass short while producing manure for the garden and meat for the table. Fulkerson took a bit more convincing; having grown up around cattle, she didn't immediately see the appeal of sheep.

"I realized sheep weigh about what I did," and thus would be easier to handle, she said. "Then I went out and bought every cut of lamb I could find and it was fantastic."

Americans don't eat or raise nearly as many sheep as they once did. Currently, the country contains about one-tenth as many sheep as it did in the late 1940s. Fulkerson said World War II is to blame: American soldiers in Europe ate too much tough mutton and returned home vowing to avoid the stuff altogether.

As America's tastes turned from sheep toward beef and chickens, efforts to improve sheep breeds fell behind, Coplen explained - so did efforts to develop new de-worming medications. Continued use of the old wormers has caused parasites to become resistant to the drugs.

That's especially bad in a place like Missouri, where parasites such as the blood-sucking, stomach-dwelling barber's pole can take a sheep from healthy to dead in a matter of weeks.

As Coplen and Fulkerson learned more about the issues facing American sheep farming, they decided to build a flock of Katahdin sheep. These hardy meat sheep don't require shearing - they shed tufts of hair that drift across the fields like tiny tumbleweeds.

The pair also had to contend with their own land. The area had been strip-mined for coal. What wasn't barren was riddled with invasive, thorny multiflora rose.

"It looked like a moonscape," Fulkerson summed it up.

That's where the blood, sweat and manure enter the picture. The pair labored to clear away the invasive plants, later making the pleasant discovery that sheep are happy to munch on rose bushes. Sheep dung helped renew the soil in the barren areas. It also helped them breed a better sheep.

The pair joined the National Sheep Improvement Program, a group of sheep farmers dedicated to improving profitability through genetic information. Alongside about a half-dozen other Katahdin farmers, they bred to improve the breed's parasite resistance and meat production. This involved collecting thousands of fresh stool samples from lambs - a process about as unpleasant as one might imagine.

But the effort was worth it.

"Now our rams have 1 percent as many worms as the average ram," Coplen said.

That's made them highly desirable, he added - in addition to selling lambs for meat, Birch Cove Farm also supplies breeding stock to other sheep farmers. The current flock is about 100 ewes strong and produces around 200 lambs each spring.

The spread of COVID-19 has made the pair see their farming operation in a new light, they said.

Fulkerson's asthma means she's at risk of falling seriously ill if she contracts the disease, so Coplen is handling any trips into town they can't avoid. The two have a freezer full of lamb, and their personal garden is already teeming with spinach, peas and other fresh vegetables. They also restocked on feed for the flock and will be relying on their own experience and over-the-phone advice as much as possible for veterinarian care.

Conveniently, the two already work from home - they retired from their day jobs long ago and now focus entirely on their flock.

"My dad was born in 1909 and was at least a fourth-generation cattle farmer," Fulkerson said. "During World War II, he wasn't drafted, because they didn't draft farmers. His job was to feed people."

More than ever, she's seeing her job as the same - especially as grocery stores implement purchase limits on certain items and major agriculture operations grow concerned about workers falling ill.

"It's an interesting community service, to make food for people in difficult times," she said.

She suspects that as the pandemic continues, demand for local produce and interest in small-scale farming will increase.