Tie a white ribbon to support fight against COVID-19 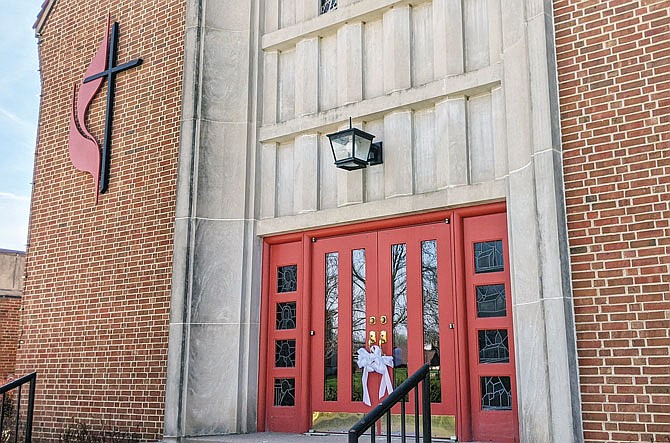 White ribbons hang on the doors of Court Street United Methodist Church. They symbolize support for those on the front lines of fighting the COVID-19 pandemic.

"Years ago, we had 'tie a yellow ribbon 'round the old oak tree,'" she said. "It brought people together - the yellow ribbon popped up everywhere."

During the Iran hostage crisis in the late 1970s, yellow ribbons became the symbol of support for the hostages held captive at the United States embassy in Tehran. Inspired by the 1973 Dawn hit song "Tie a Yellow Ribbon Round the Ole Oak Tree," people across the world tied ribbons around trees to symbolize their dedication to remembering the hostages and bringing them home. The ribbons gained renewed popularity during the Gulf War of the '90s.

Now, many people in Callaway County and across the world are held hostage by a very different enemy: COVID-19. Johns Hopkins reported nearly 1.5 million cases of the novel coronavirus worldwide as of Wednesday, while Callaway County reported 19 cases, including one death.

Missourians are currently under a stay-at-home order, the schools are closed and workers deemed essential - from health care workers to grocery store employees and truckers - risk contacting the disease while doing their jobs. Doctors, nurses and other medical personnel have proven especially vulnerable, with many working under high stress with insufficient personal protective equipment.

"People are depressed," Wickell summed it up. "Anything we can do to lift spirits would be great. Why not start (something) here in Fulton?"

While watching the national news recently, Wickell learned of a campaign that reminded her of the yellow ribbons from decades ago. In several states, hospitals have begun encouraging members of the public to wear or display white ribbons in support of front-line medical staff. The campaign is especially widespread in Michigan and Utah.

Wickell said she wants to bring it to Fulton.

"We can show support for all the people who have to be working," she said. "We're all in this together."

She raided her stock of sewing supplies for white ribbon and tied a few bows for trees in her own yard, then called up her church, Court Street United Methodist, to ask about hanging ribbons there.

"No one's going to be using those doors for a while, anyway," Wickell said with a laugh.

"Wanda called and she had that great idea," she recounted. "I like to encourage peoples' passions. It seems like a worthwhile way to show support for people who're putting themselves in harm's way."

She added her church is also showing support by crafting cloth masks for Boone Hospital Center in Columbia.

With her stock of ribbons exhausted, Wickell is encouraging locals to join in and hang their own ribbons. Don't have ribbon? Try tracing or printing this template onto a white sheet of paper: bit.ly/2Xjw5Z8.

Wickell closed with a few words of encouragement.

"Once in a while, something good comes from something bad," she said. "Maybe this is bringing families closer together. And remember the people who are alone - give folks a call."