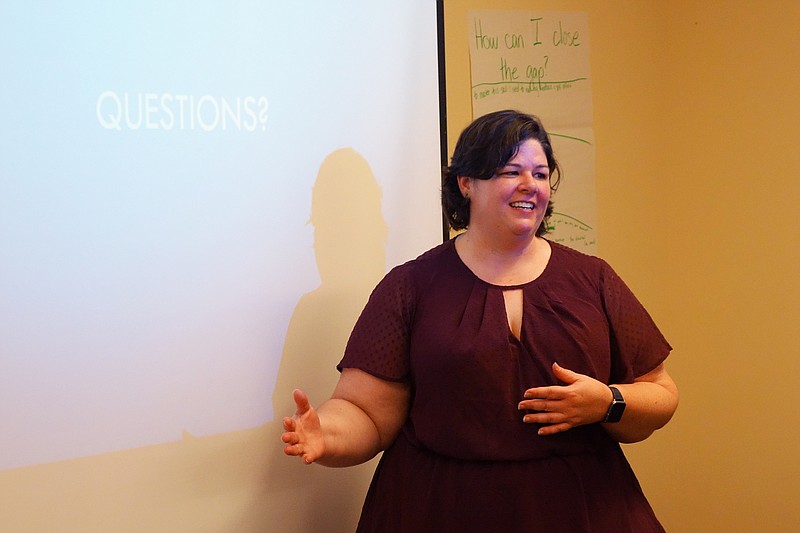 <p>Helen Wilbers/FULTON SUN</p><p>Karen Oyerly, of the Oklahoma State Bureau of Investigation, walks Westminster students through the history of DNA analysis in law enforcement. The field is developing by leaps and bounds, she said.</p>

The history of DNA analysis in criminal justice is a series of innovative leaps.

And now, crime lab expert Karen Oyerly's field has made a leap that has her and other experts relearning their own field.

"As far as I know, no one expected forensic genetic genealogy," Oyerly said.

A 1999 Westminster College graduate, Oyerly is now a Combined DNA Index System (CODIS) administrator for the Oklahoma State Bureau of Investigation. She spoke Wednesday as part of the Hancock Symposium, a series of talks by experts hosted annually at the college.

To properly understand the impact of the latest development in the field, you need to look back to the early days of forensic science, Oyerly said. Scientists in the 1800s laid the groundwork: first Gregor Mendel's treatise on heritable traits in peas in 1865, then Dr. Henry Faulds' 1880 theory that fingerprints are unique to each individual. Then, in 1888, Kodak's first camera became widely available, for the first time allowing police to thoroughly document crime scenes.

In 1910, Dr. Edmond Locard, of France, established the world's first crime lab. He also coined the principle that every contact between two objects leaves a trace. For example, a teacher holding a piece of chalk would leave chalk powder on her fingers and leave skin oils on the chalk.

"This is the principle all forensic science is based on," Oyerly said.

Through the rest of the 1800s into the early to mid 1900s, scientists developed tests for the presence of blood and semen. They learned to distinguish blood types. Some tests developed in that era are still used in forensics today, Oyerly said.

Meanwhile, the field of genetics developed with Rosalind Franklin's discovery of the double helix in the 1950s. In 1983, scientist Kary Mullins developed a method for making many copies of a particular segment (or locus) of DNA, known as a polymerase chain reaction.

"All these 130 years of progress in genetics leads to modern genetic testing," Oyerly said.

The burgeoning field would make its debut in criminal justice a mere three years later. An unknown man carried out a pair of rapes and murders in Leicestershire, England. The police's first suspect admitted to the first crime under coercion but refused to confess to the second. For the first time ever, police turned to DNA to settle the matter.

Semen samples were taken from the two victims and compared to a blood sample from the suspect. Though the samples matched each other, they did not match the suspect.

Police requested DNA samples from hundreds of adult males in the area but found no matches. Eventually, a man was overheard bragging about submitting a sample in the stead of Colin Pitchfork. Pitchfork was arrested, tested and convicted.

"It's just a year, year-and-a-half after these techniques were developed," Oyerly said. "If you don't work in a science lab, you might not understand how fast that really is."

Other major moments in DNA analysis history came in 1992, with the founding of the Innocence Project (which uses DNA to exonerate the wrongfully convicted) and the OJ Simpson trial, during which DNA testing truly entered the public consciousness.

The FBI picked out 13 particular loci on DNA to focus on for testing (later expanded to 20), which provide near-certainty when matching between evidence and a suspect. They also established CODIS, which today allows crime scene and suspect DNA to be compared against the DNA of 3.8 million offenders, 3.6 million arrestees and 1 million samples from other crime scenes.

All that sets the stage for how much the arrest of the alleged Golden State Killer shocked the world.

From 1974-75, a petty thief and peeping Tom nicknamed the Visalia Ransacker crept around Visalia, California. In the Sacramento area from 1976, the East Area Rapist carried out dozens of increasingly violent sexual assaults. Then, between 1979-86, a man nicknamed the Original Nightstalker killed 10 people around Santa Barbara County.

Investigators believed for many years that these crimes might have been carried out by a single man: the Golden State Killer. In 2001, DNA evidence linked the EAR and Original Nightstalker cases. Two more murders were added to the record in 2011 thanks to further DNA analysis.

Then, in 2018, investigators decided to try something completely new.

Rather than simply looking at 20 loci and comparing it to the existing criminal database, investigators uploaded the killer's entire genetic profile to the genomics and genealogy website GEDmatch. Distant relatives, linked by similarities in DNA, began popping up.

"(With the help of a genetic genealogist), they worked back in time to make a family tree, then worked forward in time to narrow down a subject," Oyerly said.

One man fit the tree, lived in the right area and was the right age. He was even, as police had previously speculated of the killer, a former police officer. When investigators managed to gather a DNA sample from a napkin discarded by the man, it was a match for samples from the Golden State Killer.

His name is Joseph James DeAngelo. He was arrested and charged with 13 counts of murder and 13 counts of kidnapping in 2018. He has not yet been to trial.

Termed "forensic genetic genealogy," this new method of tracking down potential criminals has offered whole new realms of investigation for people like Oyerly. It's also raised thorny ethical issues - pre-2018 GEDmatch users hadn't consented to letting law enforcement use their genetic data to trace suspects. Some genealogy and DNA websites are now adopting opt-in methods to allow users to choose whether police will have access to their data, Oyerly said.

Questions of constitutionality have yet to be tested in court, she added in response to an audience question.