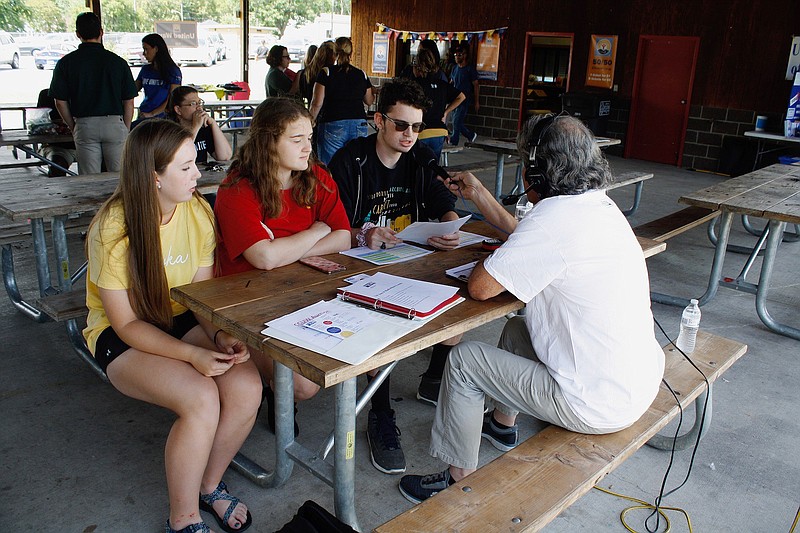 Fundraising for local agencies kicked off Friday at Memorial Park.

"This event kicks off our 2020 United Way campaign to raise money for our 12 agencies in town," said Megan Prenger, executive director of the Callaway County United Way.

The 2020 goal is to raise $270,000. As of early Friday afternoon, the agencies had raised more than $40,000 through a radiothon and selling T-shirts and food. The event also featured a bounce house for children, an auction, a clown show, face painting, crafts, an evening car show and much more.

Fulton Public Schools made big contributions to the fundraising effort as well. Each of the schools held penny drives, and McIntire Elementary raised more than $1,000 for the event.

Three students from Fulton High School came to the event with the money they helped raise. Senior Jay Vegiard said the students held penny drives every day and were able to raise $1,300.45.

"It's a very powerful thing. Any money that we raised is going somewhere to help somebody," Vegiard said.

Vegiard and his classmates Paige Key and Haisley Windsor all had the opportunity to speak live on the airwaves with KFAL's Steve Mallinckrodt about the money they raised. The radio station set up at the event to help spread the word.

In order to receive funds from the United Ways, representatives from each organization needed to volunteer at the event. Susan Lutton, executive director of Mid-Missouri Legal Services, a nonprofit that supplies free legal services to victims of domestic and sexual violence, emphasized the importance of being funded by the United Way for the past 20 years.

"This has a big impact on us. It directly pays our attorney's salaries with it," Lutton said.

Callaway County United Way President Jacque Brazas explained various businesses in Fulton run employee campaigns, which raise a significant amount of money for the organization. According to Brazas, the Ovid Bell Press, Callaway Bank and Central Bank all run their own employee campaigns.

"Today was kind of our kick off, and throughout the fall, we will collect pledges and funds. We will host a Santa breakfast event in the first Saturday in December, and then we will host an event in the spring as a 'thank you' and to also give out our money in 2020," Brazas said.