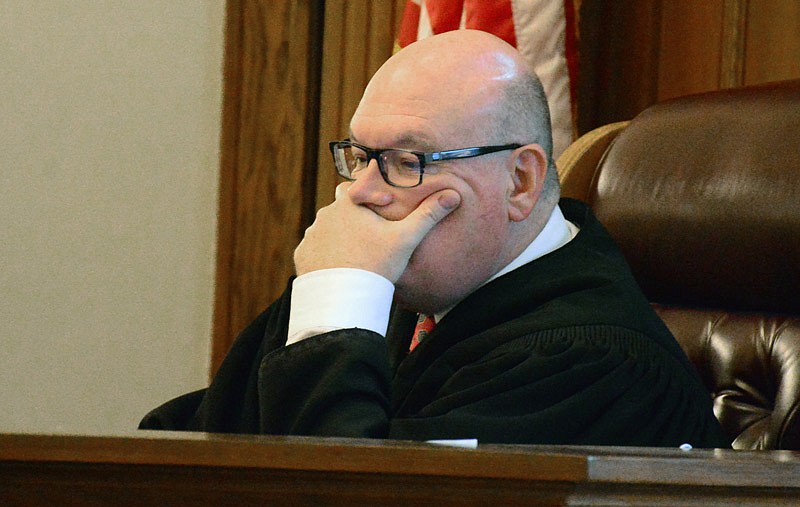 Circuit Judge Dan Green is shown presiding at the bench in Cole County court in this Aug. 31, 2018 file photo.

On Thursday, Circuit Judge Daniel Green in Cole County denied a motion filed by the Missouri Attorney General's Office asking the court to dismiss a lawsuit against Senate Bill 391.

The law in question - SB391, sponsored by state Sen. Mike Bernskoetter, R-Jefferson City, and signed into law by Gov. Mike Parson in May - prohibits county commissions and county health departments from passing regulations stricter than any state regulations for concentrated animal feeding operations, or CAFOs, which are industrial-sized livestock operations. A temporary restraining order on the law was lifted in mid-September.

In the lawsuit seeking to overturn the law, critics allege it's unconstitutional and infringes on local control.

Those named in the lawsuit who support SB391 condemn the suit as a way to hold back farmers. They argue the law is needed to stop "scientifically unfounded" local health ordinances.

"Today's favorable ruling is good news for family farmers, rural communities and local democracy. This attempt by the state to dismiss the case was without merit," said Brian Smith, of the Missouri Rural Crisis Center, which supports the lawsuit. "Senate Bill 391 was an attempt to take away local control and the rights of local elected representatives to enact common-sense safeguards to protect their constituents and communities from the negative impacts from out-of-state and foreign owned corporate CAFOs. SB 391 was a prime example of state governmental overreach."

The next hearing in the case is scheduled for Dec. 9.

The former CEO of a Missouri hospital pleaded guilty Tuesday for his role in a pass-through billing scheme in which the hospital was used to submit fraudulent claims for toxicology and blood testing, resulting in multiple insurance companies and the Missouri Medicaid program paying more than $100 million in claims.

Byrns was co-owner of Hospital Partners, a firm also co-owned by Jorge Perez. Perez, through his company EmpowerHMS, attempted to buy the Fulton Medical Center in 2017.

According to the Missouri Department of Justice, in 2016, Byrns and partner Jorge Perez took control of Putnam, a rural hospital in Missouri, through a management agreement with the hospital's board, and Byrns was installed as the hospital's CEO.

Byrns and others, including a laboratory owner, then arranged for urine drug tests (UDTs) and blood tests to be performed on a massive scale at diagnostic testing laboratories outside Missouri, on behalf of individuals who were not Putnam patients and who otherwise had no connection to Putnam. To obtain samples for testing, Byrns and his co-conspirators entered into arrangements with marketers, who solicited samples from substance abuse treatment centers, sober living homes, physicians' offices and other sources throughout the United States, in exchange for a portion of the insurance reimbursements. Many of the tests conducted were medically unnecessary.

Byrns and his co-conspirators billed the tests to private insurers and to the Missouri Medicaid program using Putnam's billing credentials, to take advantage of Putnam's favorable reimbursement rates under its in-network contracts with the insurers, while failing to identify the fact that most testing had not taken place at Putnam, Byrns admitted. The tests were funneled through Hospital Partners.