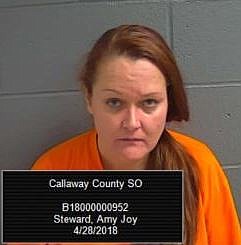 A year after David Grant was found dead in his Holts Summit home, his then-girlfriend Amy Steward has admitted to his murder.

Steward, 46, pleaded guilty Monday to second-degree murder, armed criminal action and unlawful possession of a firearm. She was originally charged with first-degree murder and felony delivery of a controlled substance.

Steward was sentenced to life imprisonment for the first charge, 10 years for the second and five years for the third, to be served concurrently. She may be eligible for parole after serving a certain percentage of the sentence.

"We wanted the death penalty, the eye-for-an-eye thing, but (we were told she wouldn't be eligible)," Grant's stepdaughter Rena Streetman said.

Several of Grant's children were present in the courtroom for Monday's hearing. They agreed the sentence brought the family some closure.

"They said it'd be another year or two before it's over (if the case went to trial)," Sarah Malki said.

According to the Callaway County Sheriff's Office's probable cause statement: at just after 1:30 a.m. April 27, 2018, Grant was found dead in his home with a bullet wound in his head after Steward called law enforcement to the house.

She initially claimed to have been at a friend's house until 1:30 a.m., stating she'd returned to the home she shared with Grant to find him dead. She also told deputies a safe containing marijuana and $15,000 in cash was missing. After that alibi fell apart when the friend told deputies Steward had left his house by 11 p.m., Steward spun an ever-changing story about what happened.

Steward first pinned the blame on Grant's daughter Cassie Grant. Then she pointed to a man referred to as J.S. in the probable cause statement - Steward claimed J.S. had assaulted her and had taken her at gunpoint to David Grant's house with the intent to steal from Grant.

Eventually, Steward admitted to putting the "stolen" safe in a storage unit April 26 but denied returning to the unit. Deputies uncovered security footage that showed Steward at the unit at 1 a.m. April 27, shortly before she called deputies.

During Monday's hearing, Steward admitted she had taken David Grant's life using a firearm she possessed illegally. Steward has a prior felony conviction, preventing her from legally owning a firearm.

"The night of April 26, Amy Steward took more than just David Grant's life," she said through tears. "She took his six kids' lives and his 30 grandchildren and five great-grandchildren's lives. He was my hero. He was my world. And she selfishly put a gun to his head and pulled the trigger, then tried to blame me in the beginning. I hope and pray that she rots in hell."

Despite the sentencing, David Grant's family still has questions about the events of April 27, 2018. No information about a possible motive was offered during the hearing.

"I want the world to know: we have the who, the what and the how," Cassie Grant said. "We still don't have the why."