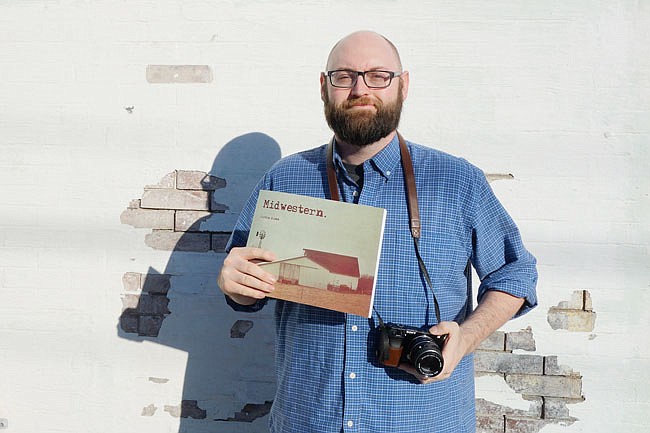 The Midwest is a place of quiet strength, photographer Justin Hamm said.

His new book book, "Midwestern." (yes, the period is part of the title), captures Callaway County and the surrounding area in photographs.

"I think it speaks to the resilience of the region," Hamm said. "Even the things falling apart are still there, and I think there's a beauty to that."

Hamm is a librarian for the North Callaway School District and also writes poetry. In 2017, Kelsay Books published his poetry collection "American Ephemeral." While he's always enjoyed photography, he's been increasingly focused on the medium in recent years.

"I've gotten obsessed (with) mirrorless cameras," he enthused. "You can adapt 50- to 60-year-old lenses to those."

He said he's spent a lot of time looking at other peoples' photography and picking up tips about composition and camera settings.

The latest book is a result of myriad drives through the region.

"(Photography) is not so different from the method for finding poems," he said. "I try to get lost, in my car, much in the way I try to get lost in the lines of my poem. You want poems and photos to surprise people, the way you never know what's down the next dirt road."

The book's photos focus on landscapes, decaying buildings, train tracks and old cars - some of which Callaway County residents might recognize.

"I hope it'll make people stop and think twice about things they drive by," he said.

None of the images include people. That's deliberate, Hamm said.

"As a photographer, you want the viewer to be able to put themselves in the scene and imagine," he said.

Holding his book, he flipped to "For Sale #2," a shot of a rusted pickup truck bathed in golden hour light.

"(A viewer) might say something like, 'This made me remember being in my grandpa's truck, 40 to 50 years ago,'" Hamm said.

Another favorite of his is "Storm Approaching," which shows a windmill backed by storm clouds, standing between a pair of grain silos.

"That's a morning shot," he said. "The sunlight was pouring in on those grain bins, which made for some interesting light."

Hamm pointed out some recurring elements. He noted the earth tones that feature in many of the photos, which echo the area's dirt and rust. The train tracks evoke movement and travel; abandoned houses might prompt the viewer to imagine who once lived there.

"I think (these pictures) tell stories to people, archetypally," he said.

"Midwestern." can be purchased from Amazon (amzn.to/2GTr41I), Barnes and Noble (bit.ly/2GTNPCT) or Hamm's website (justinhamm.net/midwestern).

His work can also be seen at several upcoming shows. It'll be on display at the Normal, Illinois, public library April 26 through early June, then in Mexico beginning in late June, before moving to the Misissippi River Gallery in Hannibal from late August to early September. The show will include photographs and poetry, Hamm said.