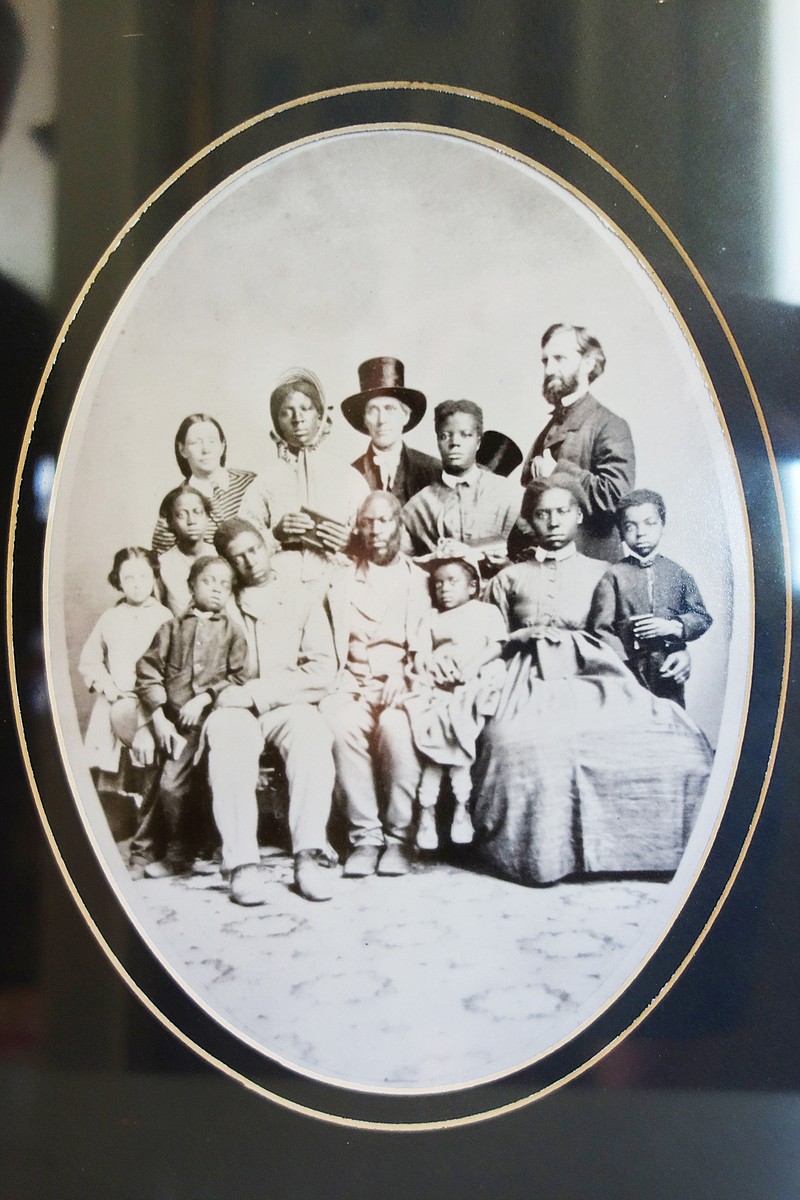 Abolitionist Levi Coffin, center, and Sylvia Rummel's ancestor Jonathan Cable, right, pose with a family of escaped slaves en route along the Underground Railroad. The only other known original print of this portrait recently sold at auction for $81,250.

A portrait belonging to the family of Fulton woman Sylvia Rummel might be, however. The portrait dates to the mid-1800s and shows abolitionists Levi Coffin and Jonathan Cable (Rummel's ancestor) posing with a large family of escaped slaves en route along the Underground Railroad.

The only other known original print, which is in much rougher shape than the Rummel copy, sold at auction this month for $81,250.

"When I heard the price, at first I couldn't take it in," Rummel said. "I was truly gobsmacked. It just looks awful compared to ours."

Cowan's Auctions, which handled the sale, estimated the portrait would sell for $8,000-$12,000. Rummel doesn't know, and Cowan's did not disclose where the copy was found.

According to Eric Duncan, director of marketing for Cowan's Auctions, the photo was consigned by a private collector and sold to an institution.

"We had four absentee bids left on the lot before the auction began, the largest being $20,000; and three bidders bid live on the phone for the lot on the day of the auction driving it to its ultimate sales price of $81,250," he added.

The Rummel copy has been in her family for generations, though no one realized its potential historical importance until relatively recently. It was part of a photo album in the possession of Rummel's great-aunt, Joyce Cable Miller, who died in 2011 at age 104. Miller had told family members about Cable and Coffin.

"She was the family historian," Rummel said.

Rummel began reading up on Coffin and learned he was known for aiding escaped slaves in their flight toward freedom. He was nicknamed the "president of the Underground Railroad." In 1947, Coffin moved to Cincinnati, Ohio - Cable's hometown. In fact, Cable is mentioned several times in Coffin's memoir as helping with the abolitionists' efforts.

Most notably, in 1853, Cable played a major role in the "Escape of the 28." A group of 28 escaped slaves from Boone County, Kentucky, were passing along the Underground Railroad on their way to Canada. When they arrived in Ohio in February, Cable knew he'd need help hiding such a large group. He reached out to Coffin and John Hatfield, a local black barber.

Hatfield and Coffin managed to get hold of a pair of coaches, and instructed the fugitives to pose as mourners in a funeral possession. The ploy succeeded; the group entered Cincinnati without rousing suspicion. The fugitives were split up among several local safehouses, including Cable's. Cable helped provide shoes and clothing for the fugitives as they braved the winter weather up north.

"A lot of them just didn't have shoes," Rummel said.

The fugitives successfully made it to Ontario in April 1853.

Due to the necessarily secretive nature of the Underground Railroad's operations, photo documentation is rare.

"I just thought, well, somebody's got to be interested in it," Rummel said.

Interest in the portrait didn't really take off until she reached out to the Fulton Sun. In February 2011, the Sun published an article about the Coffin/Cable photograph. That article caught the eye of Betty Ann Smiddy, a historian with the College Hill (Ohio) Historical Society.

Smiddy believes the photo documents part of the "Escape of the 28" group, Rummel said.

Another historian, Dr. Robert Wallace of Northern Kentucky University, has a theory about the photographer's identity. Rummel said he believes the portrait may have been taken by James Presley Ball, a black Cincinnati daguerotypist who had previously photographed Coffin.

Rummel has heard from graduate students, other historians and even a teacher.

"A school teacher from Minnesota called me - he wanted me to talk (via video call) to his students," Rummel said.

The photo might still hold secrets. Rummel's family's copy is still glued in to the photo album page; its back may hold information about the identities of others in the photo, or confirmation of where it was taken.

That copy now resides with a second cousin of hers in Arizona. Rummel said she suspects the cousin will sell it now that its value is clear.

The process of researching the photo has brought Rummel closer to her own past, she said. She grew up in poverty above her father's tire shop and hasn't always felt so proud of her family history.

"My past is really important," she said. "This was a kind of revelation to me. I want people to appreciate their heritage."