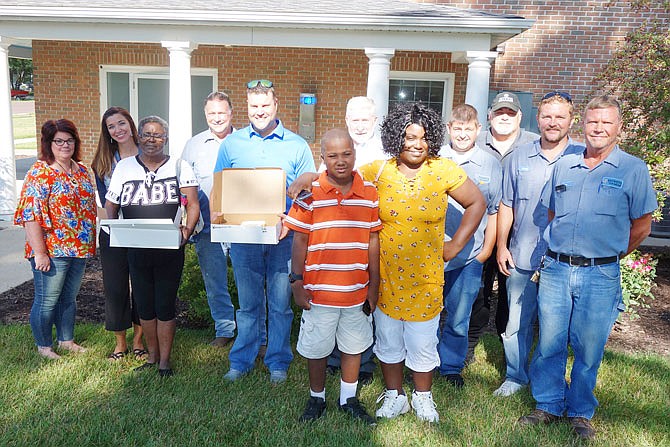 Members of the community, including representatives from Westminster College, Central Missouri Community Action and others, rallied to help Leah Martin (in "babe" shirt), her husband Robert (not pictured), daughter Rebe Jackson (yellow shirt) and grandson Cameron Evans (striped polo) get back on their feet after the flood. On Tuesday, they celebrated finding long-term housing with doughnuts from Jamolee's.

After losing two mobile homes, a vehicle and most of their possessions to the recent Missouri River floods, the Martin family is moving uphill.

"We've decided to reside in Fulton and let the bottomlands just set," Leah Martin said. "We learned a lesson: don't live in the bottoms."

Martin and her family have spent about a month living in a townhouse on Westminster College's campus while seeking long-term housing, with help from local agencies like Central Missouri Community Action. On Tuesday, the family, Westminster and CMCA celebrated their move to a new home with Jamolee's doughnuts.

Martin, along with her husband, Robert; daughter, Rebe Jackson; and grandson, Cameron Evans, moved into a pair of mobile homes near the intersection of Route C and Missouri 94 about four years ago. Purchasing the land represented a big investment for the family. Martin said nobody warned them of the area's tendency to flood before they moved in.

"In the four years I've lived down there, I've never seen water come up that quickly," she added.

As the Missouri River rose in early June, she and her family hoped they wouldn't have to evacuate. Robert has diabetes and was ill with complications at the time, and evacuating meant leaving many items behind. Then the Mokane levee broke.

The family and their pets fled to a Jefferson City American Red Cross shelter set up for tornado and flooding victims. There, they spent two miserable weeks trying to plan for the future but finding few resources. More help was available for those whose homes had suffered flood damage, Martin said.

"Our cellphones were stolen, and our clothes," Martin said. "We kept watch for each other. Cameron couldn't even go to the bathroom alone because there were all kinds of people at that shelter."

That time was especially hard for Cameron, she said. The 9-year-old has autism, which means changes from his usual routine can throw him off balance. Meanwhile, Martin's husband was getting sicker.

"That floodwater did a doozy on him," she said.

At the end of the two weeks they were allowed to stay at the shelter, the American Red Cross gave the family a $200 gift card for motel rooms, Martin said. It covered three nights.

"When your life is interrupted like that, so abruptly, it puts you into a frenzy," she said.

With the clock ticking before their noon checkout time, Martin did an internet search for nearby resources and made the drive to the Fulton CMCA.

"We started working as soon as she walked into CMCA," Kellie Pontius, of CMCA, said.

Concerned Fulton would begin seeing overflow from the Jefferson City shelters, Pontius had already reached out to Westminster College Vice President of Campus Operations Dan Haslag about opening some of the campus' housing for people in need.

"Our freshman orientation includes a service-learning aspect," he said. "It's something the college embraces, and we were glad to rise to meet the need."

The college's custodial team rushed to ready a townhouse for the family while campus security procured spare keys. The Martins moved in that weekend. Haslag said he stopped by sometimes to chat with the family on the front porch.

Rebuilding the Martins' lives didn't stop there, however.

"Every other day, they met with us to work on getting long-term housing," Pontius said. "I could feel the frustration with the gobs of paperwork."

SERVE Inc. stepped in with clothing and food and the Callaway County Health Department with other resources. Finally, the family found a place to stay out on Route C.

"I thank God for everything, and the Fulton community. I also want to thank Kellie and the whole team," Jackson said. "We didn't know who to go to."

In some ways, Pontius said, the Martin family served as a test case for Callaway County's post-disaster social safety net. County agencies and nonprofits have been working together to develop a better disaster response plan in the wake of the floods, she said.

Jackson said she hopes that plan will never be needed.

"I just pray this won't happen again to anybody and they fix the problems with the levee," she said.