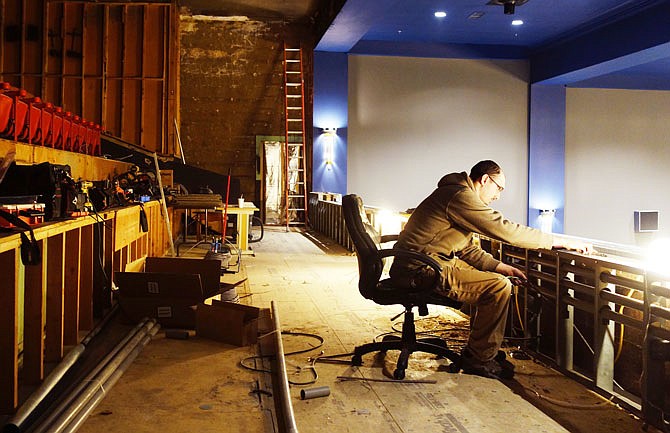 Clayton McOwen, an electrician, works in the balcony of the Brick District Playhouse.

Ongoing renovations in the Brick District Playhouse have reached the balcony.

"That's been one of the primary questions people have asked over the last four years: What are you doing in the balcony?" Debbie LaRue, Playhouse board vice chair, said. "So many people remember sitting the balcony. You can see in their faces that they're remembering who they were with and the good time they've had."

As of Tuesday, electrical work had begun in the balcony.

"We're putting up new outlets, and we might put up new sconces," P&L Electrician, Clayton McCowen said as he worked. "We'll probably have power up here by tomorrow."

"We're hoping to clean the theater chairs really well and be able to continue using them in some capacity," she said.

Those projects will be aided by generous donations from Sinclair Research and The Callaway Bank. Sinclair donated $15,000 toward light and sound equipment, while The Callaway Bank gave $50,000 to be used however necessary.

The Callaway Bank President Kim Barnes said the bank is happy to be able to support the renovation project.

"They're at a crucial point in their project and hopefully this partnership will make a big difference and move them along in their progress timeline," she said Tuesday. "The Brick District Playhouse is a contributor to the quality of life in our county and in our community. To make things work, we have to have everything from employment, education, good government and good quality of life."

The playhouse was originally built in 1927 by The Glenn Realty Co. at 613 Court St., Fulton, for vaudeville productions and motion pictures. Its grand opening was Jan. 26, 1928, and it operated for nearly 80 years. The original theater could seat 1,000 patrons - 650 on the main floor and 250 in the balcony.

The theater changed hands several times, the last in 1979 to the B&B Movie Company, which donated the building in 2005 to the Fulton community, when the Callaway Arts Council was formed.

Since 2005, several organizations (including the Callaway Arts Council) and individuals have worked to preserve and renovate the theater. In 2015, the Brick District Association took over responsibility and gave the Playhouse, a nonprofit charitable corporation, its own board of directors.

The Playhouse is also home to the Playhouse Bistro, an eatery with specialty coffees and a light, homemade menu.

To learn about upcoming events, visit the Playhouse at facebook.com/pg/brickdistrictplayhouse.