'Mokane to Mole City' and back 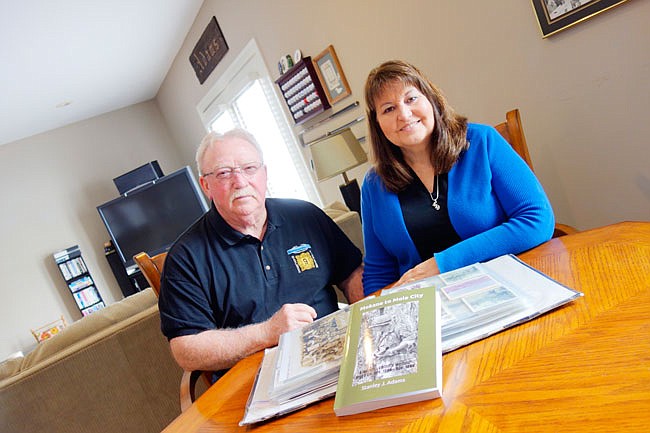 Former Staff Sargent. Stanley Adams and his wife, Rita, with their new book, "Mokane to Mole City." The newly published book is a memoir about his service in the Vietnam War and reconnections to his old army buddies in the years that followed.

MILLERSBURG - For decades, Stan Adams kept his stories about Vietnam to himself.

In June 1968 at age 19, he was drafted. Boot camp was at Fort Leonard Wood. He was shipped to the war front in November, and came home one year later, in November 1969.

He married his wife, Rita, in 1974, and they had two daughters (Kim and Nichole), then two grandkids.

"They were always asking questions, but I was reluctant to talk about it," Adams said.

In early 2000, Rita started tracking down his old army buddies and their families.

"We started going to reunions in 2003," Stan said. "It was great to see all the people, the guys I served with."

Little by little, Stan started to open up about his experiences and now has written a book: "Mokane to Mole City: A Manchu Vietnam Memoir Bravo Co. Nov. '68-Nov. '69."

He will be doing several local book signing events.

Stan said the book was important for him to write so people didn't forget about the Manchus. The book includes 270 color pictures.

"Every year I'd go to the reunions, and notice there'd be two, three guys missing," he said, adding that prompted him to write his memoir. "If I didn't do it, who would? I'd write a little bit and collect pictures. A lot of them are mine but some are from the other guys. The pictures are as important as the writing."

Stan was born and raised in Mokane and went to South Callaway schools. His father was a brakeman on the railroad.

"I remember taking lunch to him," Stan said.

In his sophomore year, the family moved to Fulton.

"My parents both got jobs at the state hospital; they retired from there," he said.

His father didn't serve in the military but his uncle did.

"My uncle was in the Battle of the Bulge," Stan said of that famous World War II battle. "My father was in the CCC (Civilian Conservation Corps)."

People can read Stan's book to get more details about his battle experiences.

"We did operations every day - every day, we'd get on a chopper and go out," he said.

Mole City was on the Cambodian border, built to create havoc with the enemy's resupply routes. It got its name because it was a system of underground tunnels.

Sometimes the weather was dry. Sometimes it was torrential rain.

"There were big rats," Stan said. "With rats, you get snakes. Big snakes."

Every time they crossed a river, there also would be leeches.

"The best way to get them off is to burn them off with cigarettes," he said. "Everything we ate was out of cans."

There were no hot showers in the jungle. You couldn't wear deodorant and the like because enemies might smell the scent. Soldiers couldn't smoke at night because the enemy could zero in on the scent. Everyone stunk bad and each soldier had their own smell.

Soldiers were supplied an insect repellent that burned their skin.

"You had to wipe it off after awhile," Stan said. "It didn't work very well anyway."

He said it ate off the plastic cover off his watch face.

The military sprayed Agent Orange, a cancer-causing defoliant, on the jungles.

"Your boots would change colors walking through areas being defoliated," Stan said. "They'd turn red or orange or green for days."

They'd find the bodies of North Vietnam soldiers in the "defoliated" areas, too. They also found bodies in areas after bombs were dropped from B-52 airplanes.

In camp, a fellow soldier had a shaggy little dog that went almost everywhere with him. One day, the dog disappeared from camp. Dogs and cats were food for civilians who only had rice.

There were other pets.

"We had a couple pet monkeys in our camp; sometimes, they'd eat from our fingers," Stan said. "Some of the people I talked to there had been fighting since they were 2 years old."

"There's a picture of him in the book," he said. "They quit because they weren't being paid."

He said he's love to reconnect to Shawn, but doesn't know how.

Rita helped Stan with the book, connecting him to his soldier friends. The first half of the book is Stan's experiences. The second half is about his fellow soldiers and their reunions.

"We worked so hard for three years to get the book done," Rita said. "My big thing was the second half of the book; finding the men, the Gold Star families."

Their daughter Kim, an attorney in Prairie Home, helped with editing the book.

"She wanted to help write her daddy's story," Rita said.

Stan also mentioned Missouri's National Veterans Memorial in Perryville, a full-scale replica of the Vietnam Memorial Wall in Washington, D.C. The grand opening ceremony for this will be May 17-18. For more information, go to mnvmfund.org.

Stan's book is available at luckysnipe.com, a family associated website where one can get a signed copy. They're also on Amazon.

Writing the memoir wasn't easy for Stan, who deals with PTSD. He's got a Bronze Star hanging on a wall with other memorabilia in his basement lounge. He's also got an Army Air Medal for more than 90 Eagle flights.

Stan, who is retired from the Callaway nuclear plant, said he's never been back to Vietnam. He only visited "The Wall" in D.C. once.

"Vietnam could have been a Garden of Eden, or a paradise, but for the war," he said.