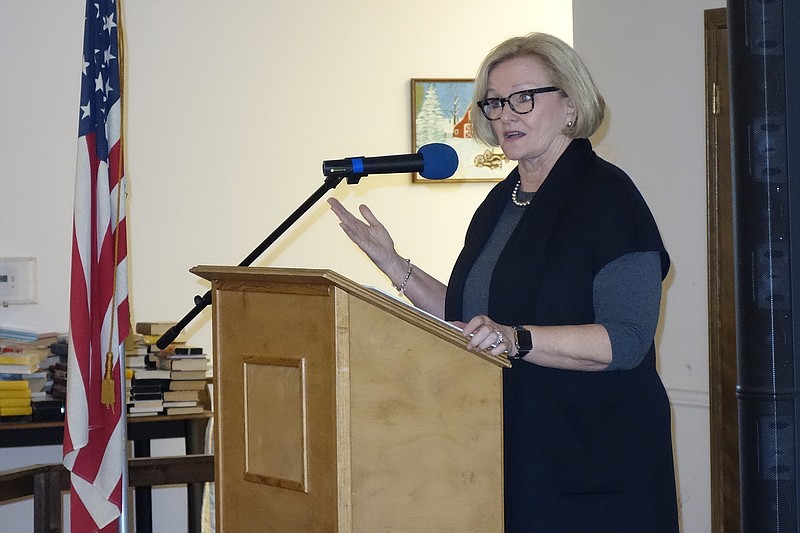 Then-U.S. Sen. Claire McCaskill at a town meeting in Fulton in 2017.

The award will be presented April 6at MMA's annual Maroon and Gold Gala on at the Hilton Frontenac in St. Louis.

"We are honored to recognize Sen. McCaskill for her leadership in public service - most notably through her support of America's armed forces, humanity in immigration programs, health care and international security," MMA President Tony McGeorge said. "She has shown determination, steadfastness, and perseverance through times of challenge, creating a legacy of commitment to the citizens of Missouri and our nation that is an example for others to follow."

In 2007, McCaskill became the first elected woman from Missouri to serve in the U.S. Senate. During her years in public service, McCaskill served as a ranking member of the Senate Homeland Security Committee and the Permanent Subcommittee on Investigations. She was also a member of the Committee on Armed Services and the United States Senate Committee on Finance.

Established in 2014 in commemoration of MMA's 125th anniversary, the Gen. Clifton B. Cates "I Will Hold" Award is named for Gen. Clifton B. Cates, a 1910 graduate of MMA. Cates led a distinguished military career, serving through several major conflicts, including World War I, World War II, and the Korean War. He eventually became the 19th Commandant of the Marine Corps and is known as the man who fought Congress to save the U.S. Marine Corps from possible extinction in 1951, paving the way for the USMC's growth and prosperity.

The award event begins at 5:30 p.m. with a cocktail hour, and dinner will be at 7 p.m. Tickets may be purchased at MissouriMilitaryAcademy.org.