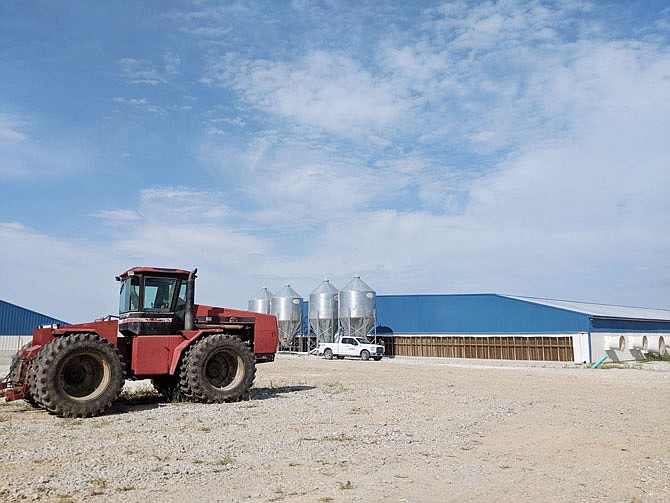 SB 391, due to take affect later this week, would keep local county governments and health departments from imposing stricter regulations on agricultural operations, including confined animal feeding operations. This CAFO, Callaway Farrowing, is located within a mile of lawsuit participant Jeff Jones' farm.

Local activists have joined a lawsuit to halt Senate Bill 391.

Jones and local group Friends of Responsible Agriculture are among lawsuit's participants, alongside the Cedar County Commission, Cooper County Public Health Center and two other farmers. The lawsuit was filed in Cole County Monday.

SB 391 modifies Missouri's right-to-farm amendment, voted into law in 2014. The lawsuit clams the bill is unconstitutional because it goes against the intent of voters, who approved right-to-farm with the understanding counties and public health centers had legal authority to regulate farming operations.

"When voters adopted (right-to-farm) in 2014, the state of the law at that point was that county commissions and health boards had legal authority to impose health regulations on agriculture and CAFOs," said Stephen Jeffery, lawyer for the suit's filers. "Fast forward five years, and the Legislature tries to take away powers that the voters thought health boards and county commissions already had. It's undercutting the intent of the voters when they improved the amendment."

It also deprives Jones and other farmers living near CAFOs of their "constitutional rights to life, liberty (and) the enjoyment of their property," the suit claims.

The lawsuit also cites gaps in current Missouri statute, such as a lack of air pollution regulations for some classes of CAFO's. According to the suit, the MACC has previously considered establishing emission standards for CAFOs, as recently as January, but ultimately opted against it.

Though SB 391 has yet to go into affect, its effects have already reached Callaway County.

In June, Jones and FORAG presented a proposed CAFO-related health ordinance to Callaway County Commissioners. The proposal followed a long struggle over a more-extensive proposed ordinance, which commissioners ultimately voted against putting to public vote in 2018.

"We came up with a very simple health ordinance, short and concise," Jones said. "Both (county commissioners) Randy Kleindienst and Gary Jungermann are on tape - when brought it to them, they said this is something we could get on board with."

Jungermann said the ordinance addressed setbacks between CAFOs and other types of dwellings and structure, and also the handling of manure originating from CAFOs. It would have required CAFO manure to be injected into fields, rather than spread or knifed into them.

"At the time, we told them, if we'd been talking about something like this two years ago, something probably could've been done," Jungermann said.

The commissioners sought legal counsel and ultimately concluded, due to SB 391, the county couldn't adopt such an ordinance or put it to the vote of the people.

"We can't do anything based on 391 becoming the law of the land," Jungermann said.

Jones said, based on his own experience as a small cattle farmer living near a CAFO, he suspects placing additional regulations on CAFOs would be popular with other locals.

"There's not a doubt in my mind that if we got this to the vote of the people we'd get this passed," he said. "It's a necessity to protect our air and water from these large corporations."

Jungermann added, though the state sometimes struggles with enforcing CAFO regulations, he thinks the regulations themselves are generally sufficient.

"The state has a lot more resources to determine what regulations should be," he said. "There's 114 counties in state of Missouri. Except for minor adjustments, I don't believe there needs to be 114 sets of rules throughout the state."

One county imposing stricter regulations simply pushes CAFOs to counties with looser ones, he said.

Jungermann said the county is taking a "wait and see" approach to SB 391 - and watching CAFOs, too.

"We have alerted the health department to keep an eye on CAFOs in the county," he said. "We said, 'Don't cause them a problem, but if you see something wrong, let's get in touch with them and get things resolved.' We want to make sure they're doing everything they're supposed to be doing to be a good neighbor."

Susan and her son Fred Williams, the other two farmers who have joined the lawsuit, live and farm in Cooper County, less than a mile from the site of a proposed CAFO known as Tipton East.

"(Susan) Williams is concerned about air and water pollution originating from the Tipton East CAFO adversely affecting and harming her health, her family's health, her drinking water supply, her agricultural water supply, and her property values," the lawsuit states.

The proposed Tipton East CAFO is to be constructed in an area with that type of soil, and plans to use underground manure containment structures, according to the lawsuit. It's unclear as to whether SB 391 will retroactively nullify that Cooper County ordinance, the lawsuit states.

The Fulton Sun reached out to several respondents named in the lawsuit but, as of press time Wednesday, had received no responses.