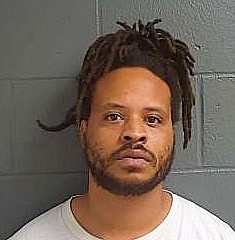 A Fulton man was arrested after a drug search warrant was executed at 8:11 a.m. Wednesday by Callaway County deputies and others.

Corelle Clark, 32, was arrested at the residence in the 700 block of Churchill Drive.

During the search warrant execution, a felony amount of marijuana was located. Deputies subsequently arrested Clark for felony possession of a controlled substance. He was transported in the Callaway County Jail on a probable cause offense and later posted a bond of $4,500. Public information as to past criminal cases involving Byrd may be accessed using the state court's public access point www.courts.mo.gov/casenet.

Also, a Hallsville woman was arrested about 3 a.m. Wednesday by a sheriff's deputy patroling the Holts Summit area. The deputy stopped a vehicle driven by Jeri Green, 43, for traffic violations near the Center Street and U.S. Route 54 interchange.

During the course of the investigation, Green was found to possess methamphetamine, marijuana, drug paraphernalia and two other felony controlled substances. She was arrested and transported to the Callaway County Jail. Green was booked/processed for three felony counts of possession of a controlled substance, and possession of marijuana and drug paraphernalia. Green is being held on a $13,500 court-set bond.

Callaway County Sheriff's Office deputies continue their patrols of the county in an effort to curb criminal activity. Citizens are reminded they may provide crime tips anonymously by calling Crimestopper's at 592-2474 or by submitting information online at callawaysheriff.org/crime-stoppers.