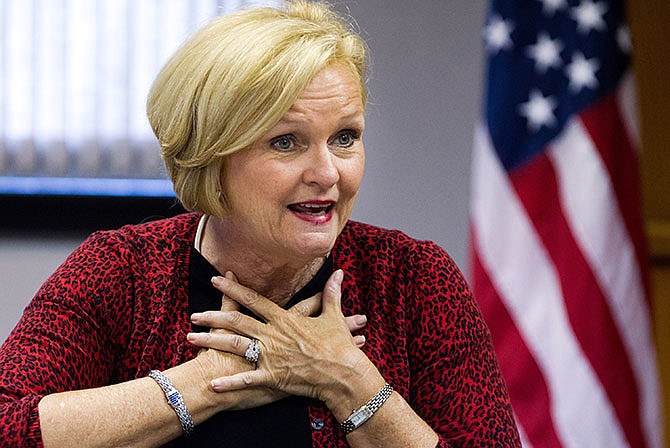 In this Aug. 23, 2013 file photo, Sen. Claire McCaskill, D-Mo., speaks in St. Joseph, Mo. Much to her astonishment but fulfilling a lifelong dream, the former prosecutor was chosen Monday, Jan. 26, 2016 for jury duty in St. Louis to help decide a slip-and-fall case against a convenience store giant accused of negligence.

WASHINGTON - U.S. Sen. Claire McCaskill is calling for a federal investigation after reports of possibly fraudulent practices at a Missouri rural hospital.

McCaskill has requested the top watchdog at the Department of Health and Human Services examine billings that occurred when a management company, Hospital Partners Inc., used Putnam County Memorial Hospital in Unionville as a pass-through for millions of claims for out-of-state laboratory services.

Hospital Partners Inc. is owned in part by Jorge Perez, whose company EmpowerHMS is managing the Fulton Medical Center. Last year, Perez stated in a town meeting he had purchased the local facility, but that sale has not been completed.

According to these investigations, since HPI entered into a 2016 contract with Putnam County Memorial Hospital, the hospital has seen a large jump in questionable revenues from laboratory services for individuals who are not actually hospital patients. Also, 33 out-of-state phlebotomists were added to its payroll, insurance companies refused to pay hospital claims for fear they're fraudulent, and there are potential violations of the federal anti-kickback statute.

Calling on the inspector general at the Department of Health and Human Services to investigate, McCaskill, a former Missouri state auditor wrote: "These arrangements have 'resulted in a significant increase of questionable revenues from laboratory billings' from the hospital - the vast majority of which 'are for out-of-state lab activity for individuals who are not patients of hospital physicians.' Billings began immediately after the management agreement between Putnam and Hospital Partners despite the fact that 'the hospital's Unionville, Missouri lab had not begun processing tests.' Troublingly, Hospital Partners has also placed on the hospital payroll '33 primarily out-of-state phlebotomists to perform laboratory services throughout the country.' In short, Hospital Partners allegedly reduced Putnam to 'essentially a shell organization for labs across the country.'"

McCaskill's statement echoes concerns outlined by Missouri State Auditor Nicole Galloway during her office's investigation into HPI, writing: "The Missouri audit findings also note that a large private insurance company has identified up to $4.3 million in payments for fraudulent claims to Putnam in recent months and 'is no longer paying any claims from the hospital because the billings submitted are pass-through billings, which are indicative of a fraud scheme.'"