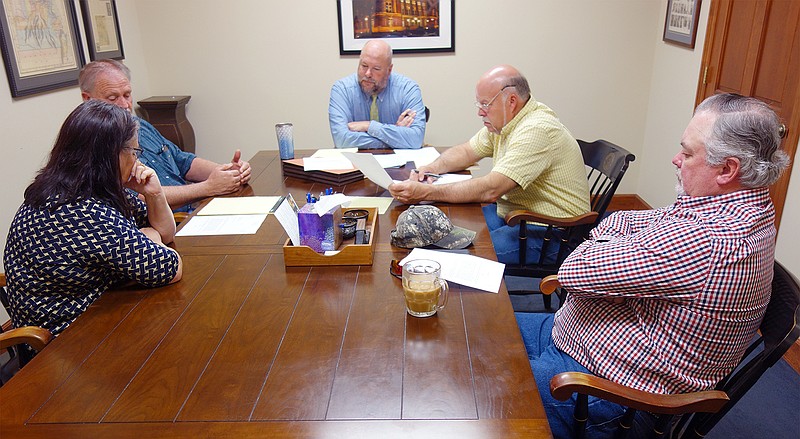 The proposed Callaway County sewer district is one step closer to reality.

County commissioners and health department members met with Fulton lawyer Tom Riley Tuesday to discuss ballot language. The language should be finalized by the end of the month - in time to get the issue on the April 2019 ballot, Riley said.

Last year, Wood organized a string of community meetings to gauge enthusiasm for a sewer district. As currently proposed, people living outside county municipalities and using National Pollutant Discharge Eliminate Systems could opt in to the district. Only those who opt in would pay for the district, he said.

Then the district could begin examining problem wastewater systems on a case-by-case basis. A board-governed county sewer district would be able to apply for grants and low-interest loans to fix and revamp NPDES. They also would be able to work more effectively with the state Department of Natural Resources than individuals could, Wood has said.

Of the county's more than 50 permitted National Pollutant Discharge Eliminate Systems, most are out of compliance with DNR discharge regulations in some way, Wood said previously. Millersburg alone contains 15 NPDES.

Many were built decades ago, when the Environmental Protection Agency and DNR's guidelines were less stringent.

Those systems largely are operated by small subdivisions and neighborhoods that cannot afford the DNR's fines or the cost of comprehensive system improvements.

"According to the DNR guidelines, we could be fined up to $10,000 per day," said Linda Oberman, president of the Country East Home Owner's Association in Millersburg, at a meeting last year.

"All of the elements are here, so now we'll just fine-tune the language," he said Tuesday.

There's one hold-up: According to Missouri statutes, sewer districts can't overlap the boundaries of PSC convenience-certified sewer companies like Missouri American Water Company, which operates in the southern part of the county. However, Wood said, the company's certification doesn't actually define boundaries for the company's operation.

Riley said he'll speak to the Missouri Public Service Commission and try to get clarity on the issue.

Establishing the sewer district requires a simple majority of votes but Riley explained, only people in areas eligible to join the district may vote on the issue. That makes defining the district's boundaries important.

Commissioners also requested language be added regarding who would pay for the district.

"I think that's important so people will know they're not going to pay taxes on this," Presiding Commissioner Gary Jungermann said.

For more information about the proposed sewer district, contact Wood at 573-642-5750. Further informational meetings are coming soon, he said.