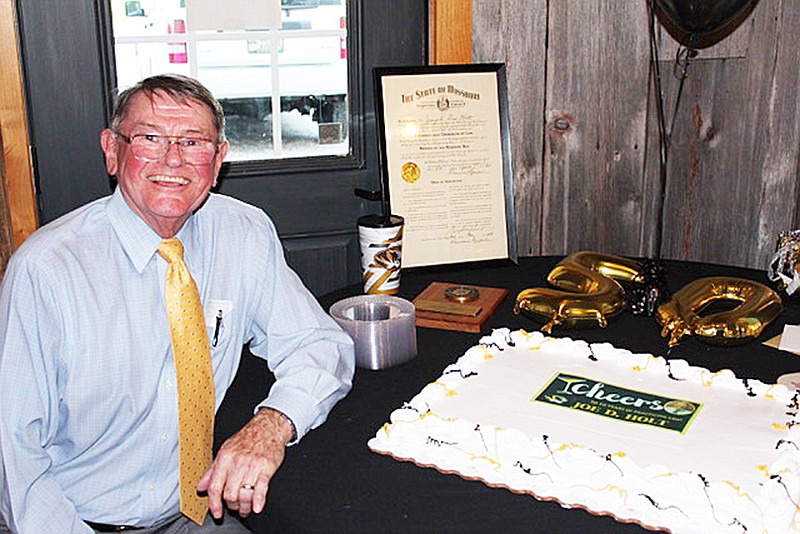 Joe Holt is just getting started.

"I'm going to keep on plugging on," the attorney said from his offices Monday. "That's what I'm going to do."

On Friday, his friends and co-workers threw him a wing-ding on the 50th anniversary of his admittance to the Missouri Bar Association.

Holt said he was born and raised in Callaway County.

"I grew up in Concord, between Hatton and Auxvasse," Holt said.

He attended school in Concord six years before it was consolidated with Hatton and Walnut Grove schools into the "Flint" school. Holt later attended Fulton High School and graduated in 1958, attended Westminster College.

"Four years later, I managed to graduate," he said, laughing.

Later that year, September 1962, Holt joined the U.S. Army Reserve as a second lieutenant. Instead of going to Germany as planned, however, he went to the Panama Canal zone, then overseen by the United States. Holt said he thinks orders changed because of a fracus between the United States and the Soviet Union over nukes being shipped to a little island named Cuba.

"I wasn't told why, they just changed my orders," he said.

Two years and no war later, that phase of life ended and another began.

"I got out of the military in September 1964 and the next day, I was sitting in class in law school," Holt said.

While attending the law school at University of Missouri in 1966, Holt decided to run as a Democrat for the state House of Representatives - and won. From 1967-82, he represented Callaway County and was the majority floor leader of the Missouri House from 1977-80. He was twice given the Outstanding Legislator Award by the St. Louis Globe-Democrat.

"I still did my full load as a student," he said.

Holt took the bar exam in February 1968 and passed. Now also serving as a Captain in the 175th Military Police Battalion of the Missouri National Guard, he was notified while posted in Kansas City, keeping the peace after the murder of civil rights leader Martin Luther King Jr.

"I was in the National Guard, the Legislature and in law school all at the same time," he said.

Somewhere in there, Holt and his first wife had three sons. Phil and Ned serve in the military and Dan is a surgical supply specialist at the Harry S. Truman Memorial Veteran's Hospital in Columbia. He married his second wife Virginia Young, a retired journalist, in September 1983. They have two children: Zoey, a computer engineer, and Jenna, assistant director of international recruiting at the Middlebury Institute of International Studies at Monterey, California.

"They're well-educated kids, good kids who have never been in trouble, and they have good jobs - good jobs that pay well," Holt said.

In 1998, former Missouri Gov. Mel Carnahan appointed Holt to serve as associate circuit judge for Callaway County, and he served until 2006. During that career, he heard all the probate matters in Callaway and many in Boone County. As a judge in the 13th Circuit, he also heard contested dissolution matters in both counties and numerous other types of cases.

Finally, attorney Tom Dunlap invited him to join his current firm, and there, Holt has served as a lawyer for the past 11 years.

"I've had a nice home here ever since," Holt said.

One of his early cases as an attorney came in 1969, representing the relative of a wealthy and mentally disabled woman.

"She was an older lady who had been raised in Boone County and had gone to Colorado and acquired a husband," he said.

As a result of that marriage, the woman owned a lot of land in Colorado including a 5,000-acre tract. She also owned land in Oklahoma, Kansas and Missouri. Holt represented a co-guardian on her father's side. In 1970, the other co-guardian (on her mother's side) died and a nephew was appointed.

"It produced enough money to provide for her nursing home care the last 12 years of her life," Holt said.

The person overseeing the property in Colorado was caught with hands in the till. Someone was appointed to oversee the Oklahoma property, but died. In fact, a lot of people died including the woman herself in 1982.

"It took six years to settle her estate," Holt said. "It was complicated. I finally devised the plan, but it took a long time and it involved a lot of property and a lot of money."

He enjoys practicing probate law, which used to involved drawing up wills and little else, but has become much more complicated. Holt also practices real estate and family law, and still finds his practice fascinating. For fun, he travels, joins in Optimist Club activities and participates in the Kingdom of Callaway Historical Society. He and Virginia are planning a three-week trip to Italy.

"I have no plans to retire," Holt said. "It's not on the radar screen right now. I'll work as long as I'm capable."