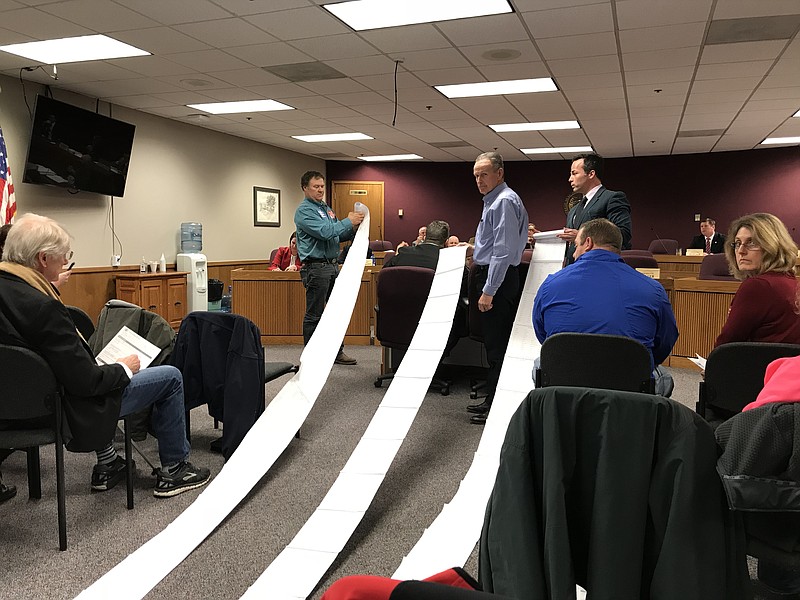 Three paper reels containing more than 3,000 signatures rolled across Missouri House Hearing Room 7, out the door and down the hallway Tuesday morning during a public hearing of the Economic Development Committee at the Capitol.

The signatures represented Missouri residents supporting House Bills 2161 and 2206, which would prohibit any alien or foreign businesses from acquiring agricultural land in the state. This would repeal a 2013 law allowing international companies to own as much as 1 percent (300,000 acres) of Missouri's agricultural land.

Among the bills supporters' concerns with large-scale foreign ownership of Missouri farmland is that Chinese companies are less invested in maintaining the quality of the land for future generations than Missouri farmers. They also fear China's control of such a large portion of U.S. food production could be used to battle America in a trade war by manipulating commodity prices.

Representatives from the Missouri Farm Bureau, Missouri Rural Crisis Center, Friends of Responsible Agriculture, Family Farm Action and others testified Tuesday in favor of the bills.

Callaway County farmer Jeff Jones, a member of local group Friends of Responsible Agriculture, helped roll out the signatures at the public hearing.

Those who testified against the bills included representatives from Smithfield Foods, the Missouri Cattlemen's Association, Missouri Pork Producers and the Missouri Land Federation.

The Missouri Land Federation is concerned that under the bills' current language, any property sale larger than 5 acres that could be used for agricultural purposes will have to be submitted to the Department of Agriculture for approval.

Cattlemen's Association representative Mike Deering said the bills would be a slap in the face to long-valued free market principles, and the 2013 law closed loopholes formerly used by foreign entities to effectively purchase Missouri farmland with less state oversight.

Missouri Pork Association Executive Vice President Don Nikkodem said the association supports agricultural investment in rural communities, including that of companies like Smithfield Foods. He said after the hearing foreign ownership makes up only a fraction of the maximum 1 percent, and further limiting foreign investment in rural Missouri agriculture would jeopardize the well-paying jobs those companies provide.

State Rep. Alan Green, D-Florissant, questioned whether reducing the cap on foreign ownership would be enough to rectify the problems the bills' supporters listed, such as Chinese control in American business, because many additional industries have been largely bought into by foreign companies.